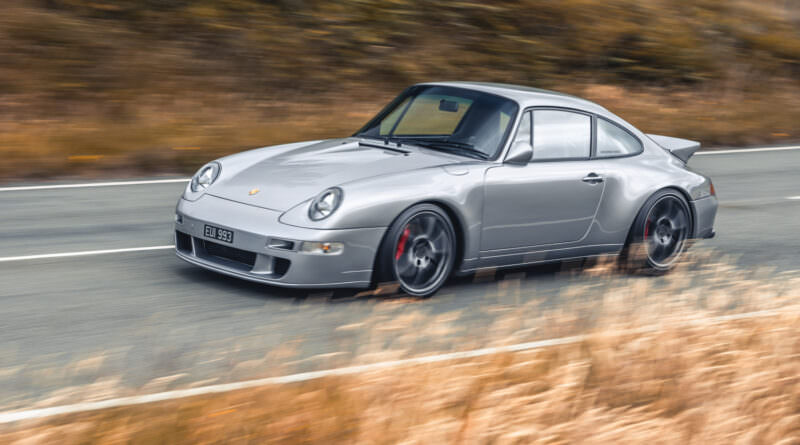 The ultimate air-cooled 911? We put the Paul Stephens Autoart 993R to the test

Porsche specialist Paul Stephens reckons he’s built the ultimate 993-generation 911, and we can well believe it. You’ll need deep pockets to buy a 993R, but that money will pay for an outstanding restomodded classic.

About 80km north-east of London, almost hidden behind a hedge on a fast country road, there’s a place where dreams come true. Day in and day out, Paul Stephens and his team sell classic Porsches to discerning customers looking for a tidy example of the car they’ve always wanted. It isn’t an easy place to find – the unassuming white sign flashes past in a heartbeat if you aren’t on the lookout for it – but it’s a veritable treasure trove for those who love an old Porsche.

The showroom is chock full of old 911s, most of which are for sale in near-mint condition. But that’s only half of Paul’s business. The local lad, who started out as a Porsche dealer, has also turned his hand to fettling older vehicles. The company undertakes all manner of work, from servicing to full-blown restoration and from repairs to rebuilds.

It has even worked with Porsche itself to create a fully licenced limited-edition 911 Le Mans Classic Clubsport, one of which is lurking in the car park as I arrive. The car is one of 10, and it’s destined for South America, where emissions rules are somewhat different. The result is a throaty, guttral, lumpy exhaust note that reminds me of a classic fighter plane, rather than a car. And when the throttle opens the noise is biblical.

But as much as I love the Le Mans Classic Clubsport, it isn’t the car I’m here to see. You see, Paul reckons he has created the ultimate road-going 993-generation 911, and I’m here to find out whether he’s right.

The car lurks in a corner of the showroom, right next to the workshop door, and it doesn’t immediately stand out. Perhaps that’s because it’s silver, with the words ‘development vehicle’ subtly adorning the rear windows in small block capital letters. To the untrained eye, it looks distinctly 911-ish, with the classic narrowbody stance of the conventional ‘C2’ base model and an understated paint job.

However, those with a little more experience around 993-era 911s will spot the new bumpers, the tiny door mirrors and the off-spec wheels, all of which hint at this car’s true purpose. This is designed to be as good as road-going 993s can get, and that’s a bold statement given the regard in which the 993 is held. As the last and the most advanced of the air-cooled 911s, it’s a more desirable option than the unloved 996 that came next.

But Paul and his clients believed the 993 was still far from perfect, and the Autoart division of Paul’s business – the side that deals with bespoke commissions – set to work perfecting the recipe. The car is based on an already tidy, but otherwise standard 993 Carrera 2, the basic rear-drive version, with its narrower stance and less powerful engine. And the basic recipe is unchanged: this is still a rear-drive sports coupe with a six-cylinder engine at the back and classic Porsche styling.

Everything else, however, is a little different. The 993R, as the Paul Stephens car is known, has a 3.8-litre flat-six engine producing around 330hp, thanks to a mish-mash of components from other Porsches. The pistons are from a 993 RSR and the crankshaft is from a 997 GT3, as is the oil pump. There are some bespoke parts, too, including the new cam shafts and con rods. And of course, at 3.8 litres, the engine is 200cc larger than the standard car’s 3.6.

But the real artwork is not the engine – it’s the lightness. Paul talks constantly about his belief in less being more, and that shows through in this car’s design. There’s an integral roll cage and seam welding for extra stiffness, but weight has been shed through the removal of the sunroof, the addition of an aluminium bonnet and deletion of the rear windscreen wiper. Even the new bumpers, made from composite, are lighter than standard, weighing in at just 9kg each.

Inside, Paul has stripped back the cabin with a more minimalist composite dashboard and fitted Recaro carbon-fibre bucket seats. There’s lightweight soundproofing, too, and a lighter wiring loom. The Autoart team have even done away with electric windows to save weight and remove the heavy wiring from the doors, while the centre console, glovebox and door grab handles have all gone, as has the radio and speaker system. The heavy air conditioning unit was removed, too, but Paul replaced it with a lighter, electrically powered system.

Although the focus is clearly on lightness, Paul has clearly paid attention to quality. Neat touches can be found everywhere, from the branded trim covering the welds in the roll cage to the little pouch in which the key is stowed. The hidden door handles are a clever touch, too, after Paul decided to do away with the bulky, ugly handles fitted to standard 993s. Even the luggage bay has been cleaned up with a whole new lining that looks and feels more solid.

Perhaps the smallest touch, albeit one that perfectly demonstrates the company’s commitment to improving the breed, is the decision to close up the shut lines between the door and the dashboard, giving a greater sense of perceived quality. It’s a minor thing, but one that aficionados will notice and appreciate.

Getting the Autoart 993R on the road

And that shows when you get this car on the road. Crawling out of the car park is surprisingly tricky, thanks to the sharp bite point in the clutch, but that’s the price you pay for what Paul accurately describes as the “zinginess” of the engine. It revs freely and happily, creating a lovely snarling soundtrack as it does so. And with a snappy manual gearbox between the seats, it gives you a real sense of involvement, but more importantly, it encourages you to wring the engine out to its full potential.

That potential is pretty awesome. Paul hasn’t produced any official performance figures such as 0-100km/h times, but the 993R is quick, without being outrageous. It doesn’t really get into its stride until about 5,000rpm, so it doesn’t feel as urgent as modern turbocharged 911s, but with relatively little weight to shift, the 993R still picks up pace quickly.

But the speed isn’t what impresses most. As well as stiffening the chassis, Paul has also fitted new suspension with a choice of five settings. Customers can choose the five settings they prefer, but the five options already on offer are pretty good. The softest setting is much more of a touring option, and although it’s still stiff, it rounds off the bumps nicely – just like a modern Carrera S. Head for the firmest option, though, and you can feel the car tense up, giving better body control but a more jiggly ride. All five choices are well judged for the road – even the stiffest setting is no worse than a current 911 GT3 – but were it our car we’d choose a slightly softer setting at the road-going end and a slightly tauter option at the more dynamic end.

Whatever, this is an impressive bit of kit, with immense grip from its Michelin tyres and this amazing sensation of stability. With the engine creating a massive pendulum effect at the back, 911s can feel a bit wayward, but the 993R just sticks. And with proper, feelsome steering, you have plenty of confidence in the car when you turn into corners.

Once you’re accustomed to the clutch, the 993R is also very capable around town, with compact dimensions helping it to squeeze through tight gaps. The tiny mirrors are pretty useless, but Paul’s happy to swap them for something else if customers so wish. Rear visibility is also impacted by the roll cage, but the difference isn’t too dramatic.

As a result, Paul really has created a modern classic 911 you could happily use everyday. The ride isn’t bone-shaking, the cabin is easy enough to live with, and the noise is sublime. It’s an incredible thing, and although the development car isn’t perfect, Paul will gladly make adjustments for customers who want them.

As well he should, because you’re looking at spending a substantial six-figure sum to own one of these. Of course, prices depend on what you want and whether you have a 993 ready for conversion, but the 993R will always be expensive, even by supercar standards. You have to be a serious 911 nut to buy one, but those nuts will be rewarded with what must be the best everyday 993 you can drive.