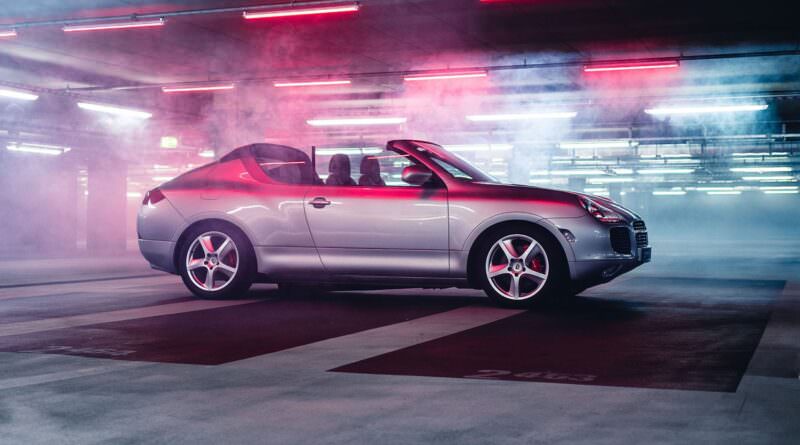 Thankfully the Porsche Cayenne convertible was a one-off

One removes the roof from an SUV at one’s peril. It can work — a rag-top Land Rover Defender is always a welcome sight, as is a Jeep Wrangler with no roof — but in other cases it’s just a bad idea. Range Rover Evoque convertible? Eurgh. Nissan Murano cabrio? Ewwww. Chrysler PT Cruiser convertible? Bloody hell, actual vomit…

What about a Porsche Cayenne convertible, though? We should clarify — not the current, fairly blandly handsome Cayenne, but the original. The first generation, with its frankly ill-advised distended 996-era 911 styling that is only now starting to look nostalgically charming, as opposed to just flat-out fugly. That one.

Would cutting the roof off that original Cayenne have been a good idea, stylistically? Well, now we know the answer. It turns out the engineering bods at Porsche were way ahead of us with this idea and actually made one.

In 2002, Porsche decided that a roofless Cayenne might actually be worth the candle and set about creating a styling model of one. What’s critical is that someone realised pretty early in the process what a god-awful idea this was, so things never got any further than this styling buck. It’s a real Cayenne, cut-and-shut, but doesn’t have the body stiffening you’d need to make it driveable. This raises the intriguing question of just how dreadful it might be to drive…

Called a ‘Package Functioning Model’ in technical terms, this one-off is a rolling chassis that Porsche used primarily to see if a convertible top could be made feasible and if it could be packaged into the Cayenne’s structure.

The answer? Sure it could; they’ve done it. It just involved a lot of chopping and rearranging, which has made the already visually challenging Mk1 Cayenne look arguably even worse, except in one specific area.

To turn the Cayenne into a roadster, Porsche shortened the windscreen and A-pillars and turned the body into a two-door shape with doors 20mm longer than those of the five-door production version. At the rear, vestigial pillars are kept in a curved up-swept shape reminiscent of a 911 Targa, slightly like a 911 Speedster and a vast metal sofa. The luggage compartment was re-engineered so it hinged both at the front and back, enabling it to open and swallow the convertible soft-top. The actual folding mechanism isn’t unlike that of the current 911 Targa, in theory — it was never fully built-up and only ever existed as a computer simulation. Again, that’s possibly for the best.

Actually, around the back of the 4.8-metre long styling model, there’s the only area where you might say it improves the styling of the production Cayenne. The Porsche design team added a split rear end to the car with two different styling proposals — a common tactic in car design studios that saves time and money when working out which versions look best.

On the left of this split arrangement is a very different look for the Cayenne, which looks a bit like the back end of an old 968 convertible and is rather nice. Certainly kinder on the eyes than the styling on the right, which is like that of the first generation Panamera.

Porsche also considered chopped-roof coupe and extended-wheelbase seven-seat versions of the Cayenne. The Coupe model would eventually arrive in 2019 and remains on sale, but the seven-seater — oddly — went nowhere. However, there are tentative plans for a bigger all-electric brother to the current Cayenne, which may come with extra seats.

Thankfully, this convertible boondoggle never made it further than this one-off styling model. According to Porsche, because of the body modifications, the car is “incapable of providing a safe and stable drive, the vehicle is transported to its destination when required.” Or, indeed, capable of providing any visual style or good taste.

Michael Mauer, Porsche’s current design boss, sums it up well: “An SUV as a convertible is a challenge both aesthetically and formally. An SUV always has a large and heavy body. You combine this with a small top half and then cut off the roof – you get very strange shapes emerging from that.” Amen, brother.