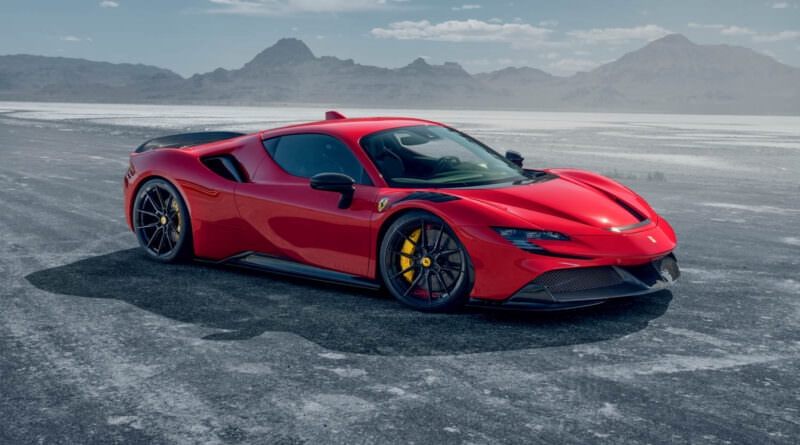 Novitec — that well-known German tuning and vehicle modification house — has turned its performance-enhancing eyes to the hybrid-engined Ferrari SF90 Stradale. You’d think that hybrids and mildly insane tuners would not good bedfellows make, but Novitec is here to prove you wrong.

Although Novitec admits that the SF90 is “a hi-tech super sports car in a class of its own already ex-factory”, the Germans reckon that what the Italians have wrought is merely “the perfect basis for Novitec, the world’s leading refinement specialist for the sports cars from Maranello, for enhancing the fascination of this mid-engined fireball even further with a sophisticated refinement range.”

Novitec started with the engine — because a mere Ferrari 4.0-litre turbo V8 was not going to be enough. Modified engine controls — Novitec’s ‘plug-and-play’ black boxes — and a new titanium exhaust have boosted the SF90’s power by 109hp to a hilarious 1,109hp.

That exhaust system can be optionally plated with ‘999’ fine gold plate for maximum heat dissipation, while there is also the option of stainless steel finishers poking out the back of the car. Novitec even updates the catalysts, fitting 100-cell sport catalysts with thermal insulation. Oh, and those can also be gold-plated…

The engine mods increase power from the 4.0-litre motor to 889hp, which when combined with the car’s three electric motors (which remain in stock form), you get the massive 1,109hp output. Plus 918Nm of torque…

The increase in power drops the 4WD Ferrari’s 0-100km/h time to just 2.4secs, and it’ll hit 200km/h in just 6.3secs. A Golf GTI would just about be getting to 100km/h at that point. The top speed rises to 340km/h. Novitec says that its modifications also improve throttle response times and in-gear acceleration.

That’s the performance well and truly taken care of; what about the aesthetics? Well, Novitec starts with a new set of 21-inch forged alloy wheels specially made for the car by US-based wheel experts Vossen. The ones on the show car are NF10 forged rims with five twin-spokes and stylised centre-lock for full-blooded racing looks. The largest possible option is a combination of size 9.5Jx21 wheels at the front and size 12Jx21 rims on the rear axle. Novitec chose high-performance tires of sizes 255/30 ZR 21 and 325/25 ZR 21 as the optimal solution.

Then the SF90 was put back into the wind tunnel, and Novitec developed a series of ‘naked carbon’ aero add-ons to give the SF90 even more striking looks, but also better aerodynamic balance. The unpainted carbon bits include a new front spoiler with detachable side sections, new front carbon flaps that direct the airflow past the front wheelarches, and new carbon trim elements for the nose of the SF90.

The front wings have been replaced by Novitec racing items. These have air vents above the front wheels to reduce pressure under the nose and provide bigger ventilation for front brake cooling.

Rocker panels, door mirrors, and side trim can also be fitted with ‘naked’ carbon. There are new deflectors for the engine intakes and a pure-carbon ‘ducktail’ rear spoiler at the rear. Joining them is a rear roof spoiler and a new rear diffuser.

Finally, Novitec got the spanners out and had a go at the suspension, lowering it by 30mm at the front and 25mm at the rear. That helps to lower the centre of gravity, but Novitec has been sensible and fitted the SF90 with a lift kit so that it can still get over speed humps and up steep driveways. Inside, you can have any colour combo you like, swathed with leather, Alcantara, and yet more carbon.