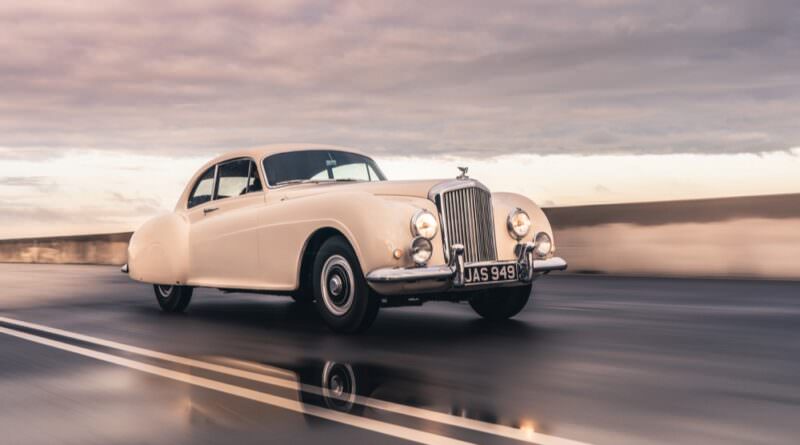 When you’re driving a hard-to-master, stunning old classic like this 1952 Bentley R-Type Continental, the last thing you want to hear is how much it is worth…

It doesn’t start well. Simply getting into the 1952 Bentley R-Type Continental involves shimmying over from the passenger side, because the four-speed manual gearbox’s lever is mounted down to the right of the driver’s seat – where you’d normally climb in. So this car’s chaperone – a lovely, affable fellow whose name might have been Brian – invites me to slide across from the left, before he clambers into the front passenger seat and gives me a broad grin.

Brian – or was it Colin? No, hang on, it was Keith… wasn’t it? – who is the man who knows this 68-year-old piece of exquisite styling the best, then cheerfully says: “OK, the clutch has got a really high biting point, so it’ll be a bit tricky to get it moving, the ‘box needs some force to engage each gear and the handbrake isn’t straightforward to operate.”

I think I might have laughed, nervously. “Oh, that’ll be all right,” I mumble, looking at the slight downward slope of the car park the R-Type Continental is parked in and thinking to myself that it’ll begin rolling itself through nothing more than the force of gravity, so I’ll have time to feed the clutch in as we gently pick up speed. I want to look like I know what I’m doing; there’s a gaggle of onlookers standing around, one of whom is Bentley’s PR chief.

But playing in the back of my mind are a couple of facts. The first is that said PR chief has told me this car (JAS 949) is worth around €550,000 in its current state. The second is that I’ve watched other journalists trying to set off in the R-Type, or even to just reverse it back into its allocated parking space at the end of their test drives, and none of them seem to have even remotely got the knack of controlling it. I casually mention my understanding of the present value of the car to the chaperone, as I’m trying to familiarise myself with the understandably unusual interior layout of a vehicle made long before the word ‘ergonomics’ was a high priority for automotive cabin development.

Brian/Colin/Keith smiles even more broadly. “Oh no, no,” he says breezily. “It’s worth a lot more than that.”

I gulp even louder.

This, then, is comfortably the most expensive vehicle I’ve ever driven in my life. Which is fitting, because back in 1952, which was the year when the UK’s Queen Elizabeth II took the throne, the R-Type Continental was the most expensive car on the planet and it was also the fastest four-seater in the world, too. It could apparently hit 193km/h flat out, while its 4.6-litre straight-six engine was capable of propelling the 1,700kg, Mulliner-coachbuilt bodywork along at a steady 160km/h with four people and all their luggage onboard.

The time comes, though, to stop thinking about what the Bentley R-Type meant to a world still coming to terms with the aftermath of World War II. Or about the fact this is the last Bentley ever sold with a manual transmission. Or to ruminate on the knowledge that while the R-Type saloon upon which this Continental is based had a production run of 2,323 vehicles and outsold its Rolls-Royce analogue – the Silver Dawn – by a ratio of three-to-one, the Continental was a far rarer creation with just 208 examples built (meaning the word ‘irreplaceable’ is swimming around my mind). The time has come to get going.

I get it moving gently enough and swing right to exit the car park, feeling not just a little bit smug that we roll off reasonably smoothly. But my victorious elation is short-lived, because I’ve not taken full account of the car park exit. The slope of the tarmac switches from slight downhill to a modest incline, and it’s a tight right out through a gate and wooden fence arrangement onto a narrow back lane in a village.

I get this step hideously wrong. Woefully (and shamefully) unprepared for the heaviness of the old car’s steering, because I’ve spent all day up until this point in power-assisted ‘moderns’ that take no thought whatsoever to manoeuvre at low speeds, my brain is therefore disengaged and I’m not even remotely getting the angle of exit correct. So I have to stop, before I plough a million Euro-worth of classic Bentley through the mellow stone walls of the sizeable barn directly ahead of me.

However, now I’m at the mercy of the R-Type’s ludicrously high biting point of the clutch, the weight of the car sitting on a slope that means it is going to roll back as soon as the brakes are released, and the thoughts rattling round my brain that go ‘THIS IS A MASSIVELY EXPENSIVE CLASSIC CAR AND EVERYONE IS WATCHING YOU SCREW UP SOMETHING AS SIMPLE AS EXITING THE CAR PARK, YOU UTTER CLOWN’.

With BrianColinKeith (actually, I think he was called Clive, on reflection) the chaperone egging me on to use more throttle, what happens next is the sort of hesitant, revvy, jerky departure that can only be described to be akin to the driving style of Welsh lunatic Mo Rees taking her first lessons in that knackered old blue Lada Riva on Driving School. Frankly, I don’t quite know how it happens, but with a lot of needless, noisy threshing from the 4.6-litre engine and the fear that I am slipping the antique clutch to the point where it will fail to engage with the flywheel at any point in the future, the R-Type Continental lurches out of the car park in an ungainly fashion, disgorges onto the tiny lane and then slowly moves away from the scene of my total embarrassment.

Graceful, this manoeuvre is not. But the car? The car is wonderful. We don’t travel far in it – out of the village, turn left down a lane, jink (and I use that word in its broadest possible sense) through a narrow cattle grid, turn left again into the driveway of a very grand English castle, and then navigate back through the grounds of that to the car park. It’s about 7km in total, it takes no more than 15 minutes and I never once venture beyond 70km/h either. But I do manage to make accurate enough gearchanges, I do enjoy the feeling of piloting something so big and grand and veteran, and I do revel in the comfort of this magnificent old machine as it floats along down the road.

Mind, it’s terrifying controlling it. Every time a car appears in the distance coming the other way, I wince in anticipation. The brakes are hopeless; not a failing of the Bentley, particularly, as the anchors on most old cars are usually woeful, but the R-Type is a large, heavy vehicle by the standards of its day and so the fact there’s next to no stopping power at all is doubly scary, especially factoring in that astronomical price tag (CURSE YOU, CLIVE!). And as much as it was a genuine privilege to drive this wonderful old Continental, I’ve never, ever been more relieved in my life to hand a car back to its owners as I was with this one.

Speaking of which, I managed to roll into the car park and back it into its space with a reasonable amount of finesse – I took that as a small win because reversing it involved backing it up the slope of the parking area. Nevertheless, the damage to whatever small slivers of my reputation I still possessed prior to driving the Bentley R-Type Continental had already been done. And I’ll always remember this as the most frightening 15 driving minutes of my life. But also 15 of the most special minutes, too.