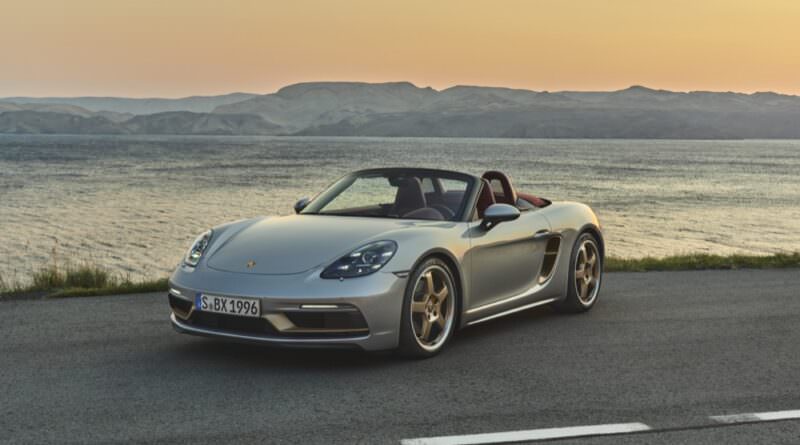 As the German sports car company celebrates the Boxster’s quarter of a century of service with a special model, we look back at the Porsche’s history.

Hard to believe that the Porsche Boxster is 25 years old in 2021, eh? A quarter of a century in service for the ‘baby’ Porsche seems to have flown by, and now we’re well into the car’s fourth generation as the 718 – with the German company having racked up more than 357,000 global Boxster sales during that period. It’s why we think it is the car which saved Porsche, not the Cayenne as many others state – sure, the big SUV went on to be a showroom phenomenon for Porsche, and it also paved the way for the company’s current number one, the Macan. But without the 1996 fiscal springboard of the original Boxster, the 2002-launched Cayenne could never have existed in the first place. Cause and effect, see.

So, 25 years old. And the Boxster brought with it some notable firsts. Like, it was the original Porsche to run a water-cooled flat-six, instead of an air-cooled lump. It’s true that some marque aficionados will say this was a retrograde step, but frankly Porsche needed to modernise in the 1990s and the Boxster’s water-cooled engine (suitably enlarged in capacity) soon found its way into the 996-generation 911, which arrived in 1997. This was part of the company’s carry-over parts concept, which allowed it to return to profitability as the 21st century dawned.

The Boxster’s name, a conflation of the words ‘boxer’ and ‘roadster’ – to reflect both its horizontally opposed engine and its open-top body – was appended to a mid-engined soft-top that was inspired by a concept car shown at the Detroit Motor Show in 1993; remember this vehicle, because we’ll return to it later in the story, although for now we’ll say the concept is safely stashed in the Porsche Museum in Zuffenhausen. We’ve even provided some pics of it for you, from our last visit to the museum in 2019.

Anyway, the Boxster’s styling was based on the 550 Spyder – which has a rather gruesome claim to fame, as it was the car in which James Dean died – and the 718 RS 60 Spyder competition vehicle. It took three years from the Detroit concept’s appearance for production to start, with the Boxster Mk1’s launch taking place in August 1996. Power came from a 2.5-litre six-cylinder engine delivering 204hp, and this powerplant not only had water cooling but also four-valve technology and variable intake timing as well.

That original Boxster, codenamed the 986, was upgraded to a 2.7-litre, 220hp six-pot engine in 1999, which was later increased in output again to 228hp. In 2000, the Boxster was joined by the Boxster S, a car that employed a 3.2-litre flat-six to deliver 252hp and increased performance. The S later saw its output rise to 260hp, the most powerful figure of any 986 model and enough to see the manual car hit 100km/h from rest in just 5.7 seconds. Automatic 986s, by the way, used Tiptronic torque-converter ‘boxes, not dual-clutch PDKs – because the PDK simply wasn’t available on road-going cars at the time.

The Cayman joins the Boxster

The 987-generation Mk2 Boxster rolled out in 2005 and this family is particularly notable in the lineage as it’s the one which saw the hard-topped Cayman coupe arrive, in 2006. The 2.7 and 3.2 engines were retained, with outputs of 240- and 280hp respectively, and there were also desirable options like the Porsche Active Suspension Management (PASM) adaptive dampers, Porsche Ceramic Composite Brakes (PCCB) and the Sport Chrono Package available to Boxster customers. By the end of 987 production in 2012, the engines had gone up to 2.9 litres and 255hp, and 3.4 litres and 310hp. It was during the midlife model facelift of the 987 in 2008 that the PDK made its debut in the Boxster line, as the automatic alternative to a six-speed manual transmission.

Confusingly, the next production codename for the Boxster/Cayman line was not 988, as you might imagine, but 981. This landed in 2012 and Porsche claimed it had a completely new, lightweight body, as well as a fully redesigned chassis. Direct petrol injection was used for the engines, the 981 kicking off with a 265hp 2.7-litre six-cylinder engine and topping out with a 315hp 3.4 boxer-six in the S. By April 2014, we’d got our first sight of the Boxster GTS – rocking a 330hp motor – and then the open-topped ‘baby’ Porsche went to another level with the 3.8-litre, 375hp Spyder of 2015. Stuttgart had actually done a Boxster Spyder in the second-generation 987 line, launching it in 2010, but that car only had 10hp more than the Boxster S of the time and wasn’t viewed in the same glorified light as the 981 Spyder.

And then, in 2016, Porsche went and upset the purists with the arrival of the 982 – also known as the ‘718’ family. The difference between these two sets of three digits is that ‘982’ is a development code not used anywhere other than by, well… foolish people like us, who reference it in the hope of looking more knowledgeable than just using ‘Mk1’, ‘Mk2’, ‘Mk3’ and ‘Mk4’; whereas ‘718’ is actually seen on the backside of the current Boxster and Cayman models, as it harks back to a four-cylinder race car of Porsche’s past. This is because the 982 models no longer used flat-six engines – they had been downsized to turbocharged four-cylinder units. It was a move that did not meet with universal appeal in the wider public, despite the fact the ‘base’ 2.0-litre engine doled out 300hp (almost as much as any six-cylinder Boxster S that had gone before it) and the 2.5-litre unit in the 718 S was up to 350hp. A GTS soon followed, using an uprated 2.5 turbo for a colossal 365hp, but even that wasn’t enough to silence the naysayers.

Which brings us almost right up to…

The Present (in both sense of the word) Boxster

In mid-2018, Porsche decided to bless the 718 models with six-cylinder engines once more, this time derived from the 3.0-litre twin-turbo unit that’s currently found in the 992-generation 911. Porsche stripped it of its two turbos and bored it out to 4.0 litres, liberating a colossal 420hp for the 718 Spyder and also the 718 Cayman GT4. Better than that, though, both of the 718 GTS twins also gained this 4.0-litre nat-asp unit, detuned slightly to 400hp but still utterly terrific.

And that brings us to the present, and Porsche’s present to the Boxster. After such a wonderful innings, the company has decided to give us the Boxster 25 limited edition. It is based on that aforementioned GTS 4.0 model, so you can have your 25 with either a six-speed manual or a seven-speed PDK automatic gearbox, although move fast – there are only 1,250 units of the Boxster 25 slated for production in total. You’ll be looking at around a 10 per cent mark-up on the GTS 4.0 for the special, so from something like €132,940 for a Boxster 25 if you’ve got the readies.

Now, remember we told you to, er, remember the 1993 concept car? And look at the pics of it? Now look at the Boxster 25 and you’ll see from where it gets its inspiration. Yup, the new special is finished in the same GT Silver metallic as the Detroit show star of almost 30 years ago, with various details finished in the copper-tinged Neodyme that clothed the concept’s wheels – for the Boxster 25, it’s used on the front splitter, the side air intakes, all of the car’s external badgework and also for the unique design of two-tone, 20-inch alloy wheels. This colour scheme is teamed to a red fabric soft-top with ‘Boxster 25’ lettering embossed into its surface, while the interior is finished in Bordeaux leather to mimic the cabin of the ’93 concept. If all this sounds a bit bold for you, then know that the bodywork can alternatively be finished in either Jet Black or Carrara White, while the interior and roof can be rendered in black rather than red.

Other specific design flourishes include high-gloss tailpipes for the standard-fit Sports exhaust system, a windscreen sporting a black surround, and also an Exclusive Design fuel filler cap with an aluminium-type finish and the ‘Porsche’ script on its surface. There’s kit like the Aluminium interior trim package, 14-way adjustable Sports seats, ‘Boxster 25’-inlaid door sills, the Porsche Dynamic Lighting System (PDLS) with LED headlights, front and rear ParkAssist sensors, and the GT leather steering wheel with a heating function, all fitted as standard too. Performance is every bit as brisk as a GTS 4.0, so 0-100km/h takes a mere four seconds and the top speed is in the region of 290km/h.

Quite the way to celebrate two-and-a-half decades of Boxster brilliance, wouldn’t you say?