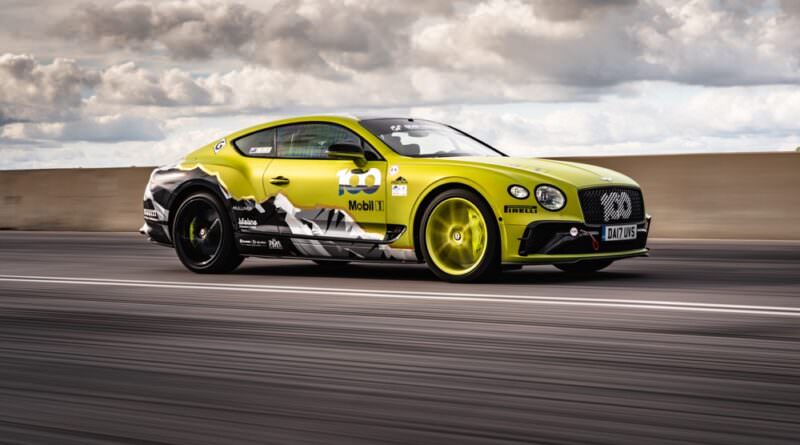 This car is good at charging up mountains and making a lot of noise while doing so. We go for a brief blast in the Bentley Continental GT Pikes Peak.

Aside from the crazy green-and-black paint scheme, and all the motorsport decals, it looks a lot like a modern-day Bentley Continental GT. Same elegant shape. No unusual exterior addenda like spoilers or splitters, although there is a towing loop attached to the front bumper. Nope, what appears to be some experimental vinyl wrapping aside, this is surely just a Conti W12 as we know and love it.

But then you swing open its hefty, solidly built doors and… woah! Now the interior is emphatically not that of a, er, ‘bog-basic’, road-going Conti GT. Oh, there are familiar bits, of course, with the steering wheel, instrument cluster and centre-console switchgear all looking comfortingly recognisable. But, so far as our fading memory recalls, the last Continental coupe we drove didn’t have a couple of socking great high-winged bucket seats in the front, complete with Sparco racing harnesses. Nor did it lack for back seats, instead here replaced with a roll cage. There were carpets in the footwells and, what’s this? A button, where the cupholders normally reside, for priming the fuel pumps on the 6.0-litre motor? Eh?!

You see, this is not just a Continental GT with some oddly incongruent exterior paintwork. It’s actually a very special Conti. A record-holding Conti. It is, in fact, the precise car that Rhys Millen (that’s his signature on the passenger dash, by the way) flung up the Pikes Peak Hill Climb in 2019, bagging the ‘Production Car’ record time with a searing 10:18.488 sprint, beating the time previously held by a Porsche 911 Turbo S since 2014 by more than eight seconds. And no, we don’t mean one of the hyper-rare, 15-off Continental GT Limited Editions which honoured Millen’s benchmark run up the Coloradan mountain; we mean the unique (as in, genuinely, ‘there is only one’) vehicle itself which charged the 20km course at such ferocious speed more than a year ago.

And here it is, wearing UK licence plates, with a friendly Bentley PR representative ushering us into the driver’s seat, and happily instructing us to take it out on the public roads. Not a closed test track. Not a thrash around a private quarry. Nope; a British A-road, thick with hatchbacks, vans, lorries and all other sorts of paraphernalia and clutter.

To be taking this Continental out into regular traffic flow like this is akin to driving a Porsche 919 Hybrid Evo around Frankfurt ring road. Or ambling to the supermarket in a Ford Fiesta WRC. It’s bonkers. Insane. Why is Bentley letting us do this?! What happens if we stack this irreplaceable machine, with its immense motorsport pedigree, into a field or something equally daft, like Olney town centre?

Who knows? But, having had an incredibly brief but hugely thrilling blast in the Continental Pikes Peak, we’re glad Bentley did allow us this remarkable privilege of driving this one-of-a-kind Conti GT. Because it’s almost as bonkers and insane to steer it as the mere idea of driving it on public roads is in the first place. For starters, there’s the noise. Of which there is a plentiful supply to assail your eardrums.

This is surprising in some respects, as the Continental GT is (supposedly) a production car and it’s a W12, which isn’t the loudest drivetrain in the world installed in what is (as the name suggests) a grand tourer, but then you remember the Pikes Peak has precious little factory-fit sound-deadening on it, no back seats and a stonking Akrapovič exhaust system flowing waste gases out of the back of the car.

It’s also brutally, kidney-punching fast. This is not such a surprise, given the car develops 635hp and 900Nm as standard, and it can also run 0-100km/h in 3.7 seconds before hitting 333km/h flat out, but with 100kg-plus of ballast shorn out of it, there’s an extra edge and urgency to the way the Pikes Peaks gathers speed. Overlaid with the hard-edged, metallic soundtrack, it ensures that acceleration feels demented; no wonder Bentley claims it’ll run 0-100km/h in less than 3.5 seconds and is capable of nearly 340km/h unfettered.

Yet it’s the way it scythes into corners, the nose eager, the tail end planted and secure, which makes this Conti feel like much more of a true motorsport weapon and far less like a slightly noisier GT with gaudy paintwork. It’s firmer-riding and crashier than a regular road-going model on its air springs would be, but the payoff is body control which is absolute and a fun factor that we’ve had in few Contis before this, save for rarities like the Supersports and GT3-R variants.

Are there any problems? Well, just a few. Getting into and out of it is almost like clambering in and out of a Lotus, so narrow is the aperture between roll cage and shell-like seat, and because this car is left-hand drive and because you are strapped tightly in position by the harness and because those chairs have such pronounced wings, visibility out of its front-right window is next to zero. This makes pulling out of T-junctions and turning left to join traffic… fun, in a cathartic, ‘release of terror’ kind of fashion.

However, all too soon our drive is up and we’re slithering inelegantly out of the driver’s seat, a big grin nevertheless plastered across our face. This is a fantastically engaging and beguiling car, and it does also raise the prospect of Bentley doing some sort of road-going homage to it in the near-future, perhaps once more reviving the Supersports moniker and taking power to 800hp (well, the last Supersports, of 2017, had 710hp, sooooo…). We can only hope, is all we’ll say on that score.

Anyway, a Conti W12 as we know and love it? No, the Bentley Continental Pikes Peak car is emphatically not that. And, frankly, it’s all the majestically better for it.