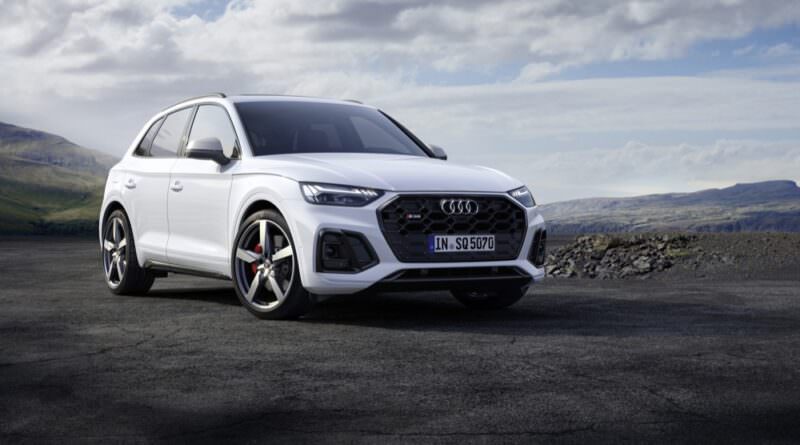 New pistons for the SQ5 engine

While it’s hardly taking the pulse of the zeitgeist, we’ve been previously impressed with the muscular 3.0-litre V6 TDI diesel engine of the SQ5. Well, now we can be even more impressed because Audi has improved it. While power and torque aren’t changed, efficiency has been improved, with new forged steel pistons (more heat-efficient than the old aluminium items), a revised fuel injection system, a new water/air intercooler, and a smaller and lighter turbocharger.

Once again, the SQ5’s engine is a mild-hybrid unit, the 48-volt electric component of which not only helps to save fuel by coasting the engine at motorway speeds, and activating the stop-start system earlier around town, but it runs the electric compressor too. This electric turbo (which is what it effectively is) improves low-end response and is more fuel-efficient than having to conventional turbos. Its compressor is the fastest thing in the car — going from off to spinning at 65,000rpm in 300-milliseconds.

Audi has worked to clean up the SQ5’s exhaust in the face of diesel fuel’s bogeyman — NOX emissions. The V6 now gets a twin-dosing AdBlue system, which injects urea solution into the exhaust in two locations. The first of these ‘Selective Catalytic Reduction’ systems is directly behind the manifold in the exhaust gas system, and the other is further back, under the floor. Thanks to twin-dosing technology, the SQ5 comes in substantially below the limits of the new “Euro 6d ISC-FCM AP” emissions standard, which also stipulates a dramatic reduction in NOX
emissions in the real driving test conducted on public roads in everyday traffic situations.

Because of the engine changes, Audi has also tweaked the eight-speed Tiptronic automatic gearbox. Now a clutch in the centre of the transmission that activates to help with engine-off coasting. The quattro four-wheel-drive system distributes torque between the front and rear axle in a 40:60 ratio. In the event of wheel slip, most of the drive torque goes to the axle with the better traction. Up to 70 per cent can flow to the front wheels and a maximum of 85 per cent to the rear wheels. The SQ5 can also brake its inside wheels to aid fast turn-in to a tight corner. There’s also an optional torque-vectoring rear sport differential.

The SQ5’s suspension is unchanged, but there are new 20-inch alloys, with 21-inch rims available as an option. The braking system gets massive 375mm rotors at the front, with six-piston callipers.

The SQ5 also now gets some lightly tweaked exterior styling, with new air vents in the bumpers, and some detail changes to the grille. LED headlights are standard, with Matrix LED units available as an option. At the rear, a matte aluminium strip is integrated into the lower bumpers, below which are the diffuser insert and four chromium-plated oval tailpipe trims. Customers have a choice of nine exterior paint finishes and a ‘black’ styling package.

Around the back, there are also Audi’s new OLED brake lights, which are faster reacting and which can light up individual segments in sequence. They allow you to choose from three ‘light signatures’ when unlocking the car and have a unique light shape for when you’ve selected Dynamic mode.

Inside, there’s a nod towards sustainability by using a new ‘Dinamica’ suede-like fabric that replaces the old Alcantara option, and which is made mostly from recycled plastic. There’s also a new Plus version of the rear bench seat which can be adjusted laterally and which has tilting backrests. There’s a new 10.1-inch touchscreen for the infotainment system, which comes with natural voice control, and which connects to the MyAudi app in your smartphone. There’s also Audi’s new Car-to-X services which can help drivers find parking spots and which can also warn of hazards such as slippery roads and fog on the route ahead.

6 min read food to bring to a picnic date

6 min read food to bring to a picnic date