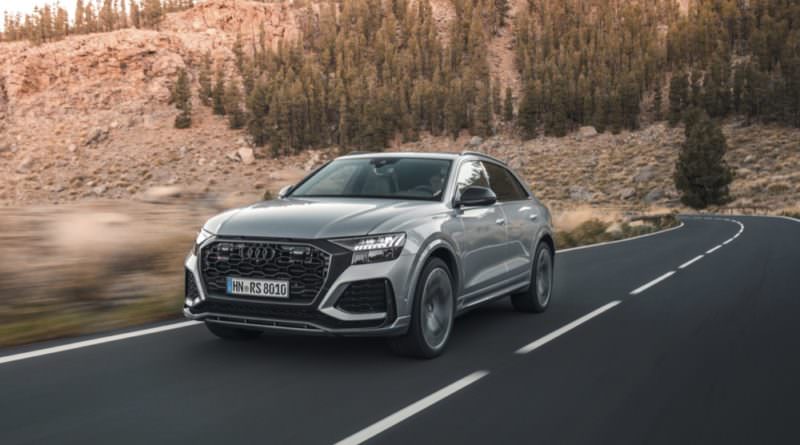 It’s not even the likes of the distantly related Porsche Cayenne Turbo or Bentley Bentayga the Audi RS Q8 must overcome, or even the RS 6 Avant, but rather a diesel-drinking sibling from its own range…

Serendipity is a wonderful thing (not to mention a wonderful word, in and of itself), and there’s plenty of it in the car-reviewing industry. Take, for instance, the launch of the Audi RS Q8, which took place on Tenerife in December 2019. Now, quite by happy chance, merely attending the launch in the first place would mean doing around 500km to and from our ‘local’ airport in an SQ8.

Which meant we had the unique opportunity to conduct an unusual twin test with the luxury high-performance SUVs… as long as you accept there were 2,925km between the pair of cars that were being tested on two entirely different islands, and in those 2,925 kilometres were a couple of continents, an ocean and a sea.

Anyhow. We digress. And we also ought to offer a formal apology to our RS Q8 driving companion on Tenerife, who had to hear about 347 times that, yes, we were driving an Audi SQ8 Vorsprung back home so we clearly knew everything about the Q8 range and hierarchy and so on. So, er… sorry, driving companion. We really are.

Moving swiftly along, the differences between this pair of brutal Audis amount to much more than an additional ‘R-plus-space’ in one of their nameplates, although there’s also a lot of similarities between them too. Both are mild-hybrid vehicles (MHEVs), using 48-volt onboard electrickery to allow for more engine coasting between 50- and 160km/h, to power various bits of their dynamic and drivetrain equipment, and to (ostensibly) save some fuel.

Both are 4.0-litre V8s with multiple turbochargers, two in the case of the RS Q8 and ‘three’ (sorta, kind of) in the SQ8, which has two trad ‘snails’ and then an Electrically Powered Compressor (EPC) which runs off the MHEV stuff.

Both get beefier looks when compared to other Q8s, with big air intakes and even bigger alloys and an even, er, biggerer Singleframe radiator grille. Both have quality cabins with the three-screen MMI Touch interface, plus various S/RS (delete as appropriate) accoutrements. Both are pure five-seaters: it’s left to the related Q7 to handle Audi’s seven-seat-SUV duties, and while there’s an SQ7 version of that using the same drivetrain as the SQ8, as yet there’s no RS Q7 on the horizon.

Both even have somewhat questionable exhaust-pipe treatment, the SQ8 displaying quad tips (only two of which, the inner ones on each side, are not blanks) beneath its back bumper while the real double-‘peashooter’ exits of the RS Q8 are too-often visible behind its hulking great oval finishers.

But then come the differences. The SQ8 is a turbodiesel, with a lower rev capacity, less intoxicating noise throughout the operating range and a considerably less rapacious appetite for its fuel-type. Despite having a sportier chassis and (the option of) many of the anti-roll/all-wheel-steer tricks of its bigger brother, it’s not designed to be as overt a performance machine in the corners as the RS Q8 and nor does it feel it.

The RS derivative definitely has the dynamic edge: it feels tauter, sharper, more alive and even more ridiculously talented (for something so colossal) in the corners. That’s as it should be, because the RS Q8 is, well, an RS; that’s Audi’s top-dog performance moniker, the badge which all Audiphiles want on the rump of their given vehicle.

The RS Q8 is also preposterously loud and indecently fast, rather than being merely sonically alluring and impressively rapid like the SQ8. The most telling bare statistical difference between these is not the second between them for their 0-100km/h times, nor the fact you can get the electronic speed-limiting nanny on the RS Q8 elevated to a giddy 305km/h, making it almost as quick as its Bentley Bentayga Speed and Lamborghini Urus cousins.

No, it’s the 8.1-second chasmic gulf between their 0-200km/h times: where 600hp machines make their megalomaniacal tendencies most keenly felt is at the sort of velocities which are wholly illegal on almost every road in the world (notably, save for in Audi’s homeland of Germany).

And the RS Q8 is no different on this score. It is absolutely, breathtakingly relentless as it thunders past 160km/h and begins zoning in on 200km/h and beyond, whereas an SQ8’s mighty torque-driven acceleration starts to tail off soon after breaching 160.

Also, there’s no doubting the seriousness of the RS Q8’s chassis, because a near-production-ready example of it, in the hands of talented and affable German racing hand Frank Stippler, has bludgeoned its way around the Nürburgring Nordschleife in seven minutes and 42-and-a-bit seconds.

That not only makes it the quickest SUV round the ‘Ring ever, by a whopping ten seconds, it also makes it three seconds faster than a darling of the petrolhead elite’s world, the Renault Megane RS 300 Trophy-R. Whoever said fast SUVs weren’t dynamically capable was telling porkies, then…

Except… they kind of weren’t. The RS Q8 is undoubtedly monumentally quick, both in a straight line and along a sinuous mountain road in equal measure, but is it out-and-out thrilling? The noise it makes is. The speed the scenery blurs past the glasshouse is.

And it is a long, long, long way from some of the Audi RS models of the past, with their inert, dead-behind-the-eyes steering, rock-hard springs and dampers, and nose-heavy, understeer-led sensations of cornering; we’d say the RS Q8 is an exceptionally good performance SUV, all things considered.

Yet it’s not as exciting as all of the on-paper numbers might have you believe. There are other big-power, heavyweight SUVs in this sector which feel more invigorating behind the wheel, not least the Porsche Cayenne Turbo Coupe with which the RS Q8 shares so much, and – further complicating the RS Q8’s case – those age-old nemeses of Audi, BMW and Mercedes, are readying their latest entrants to this rarefied marketplace: the X6 M and GLE 63 S Coupe are both inbound, and both of them have MORE than 600hp, as well. Although the BMW is visually hideous, so the Audi should be OK there.

And then there’s the RS Q8’s drink problem. Admittedly, we drove the big Audi flagship as hard as we dared up the side of a volcano (Teide, of course), so there’s the thin air of altitude to think of and the steepness of the ascent and the moral freedom of driving something so profligately thirsty on someone else’s fuel/credit card.

But we got 34.4 out of the RS Q8. Does that sound absurdly good? Well, let’s put some empirical units on that – that was 34.4 litres/100km. Which is 8.2mpg. Admittedly, our homeland is not known for its 2,200-metre tall volcanoes, as per Tenerife, and the threat to our licence/bank account of driving the SQ8 as hard as we did for as long as we did with the RS Q8 meant the diesel Audi’s throttle inputs were largely tempered in comparison.

But even when thrashing the bejesus out of the SQ8, it only dropped into the high teens for mpg. On a steady motorway cruise, it then chucked in 34.2mpg; a figure which the RS Q8 could only hope to achieve if someone pushed it off the side of a volcano. In a tailwind. With its engine switched off.

And, before you start saying the sort of people who want a 600hp SUV are the sort of people who couldn’t give two hoots about fuel economy, we’ll accept you’re right – but they ARE bothered by fuel range, as they don’t enjoy having to mix it with the (impoverished) likes of us by filling up too regularly at dirty, filthy petrol stations. And when the SQ8 will happily do up to 800km on a single tank of diesel, compared to the RS Q8’s absolute theoretical best of 400-500km (but figure on more like 300km, if you drive it quickly at any point), then you can start to see where this is heading.

Of course, it’s contradictory of us to be going this way with our conclusion on the Audis, because Bentley’s Bentayga uses the same tactics in its line-up. There’s the Diesel model, which has exactly the SQ8’s engine and which is designed to have more fuel range than the V8 version (which, in turn, employs a derivation of the RS Q8’s motor, although it’s less powerful in the Benters) and the mighty 6.0-litre W12 twins (regular and Speed flavours).

And we think you should be buying the V8 or the Speed with the Bentayga, because – as good as the trip-turbo diesel V8 engine is – the ultra-prestige Bentley thoroughly deserves a petrol mill. Also, the 6.0-litre W12 is now an engine that is bespoke to Bentley in the wider VW Group, so it feels doubly special to be driving it.

With these Audis, though, we know which one we’d have. And so, serendipity hasn’t been kind to the RS Q8 this time around, as the proximity (in time, if not in distance) of driving it so near to the SQ8 has somewhat dulled the experience of the 600hp model.

That the SQ8 does 99.99 per cent of what the RS Q8 does, for less money and with lower running costs/a greater single-tank range, seems to make it the king of the Q8 hill (volcano? Can we mention a volcano again? Is that allowed?). Even if there’s an RS purportedly sitting above it.