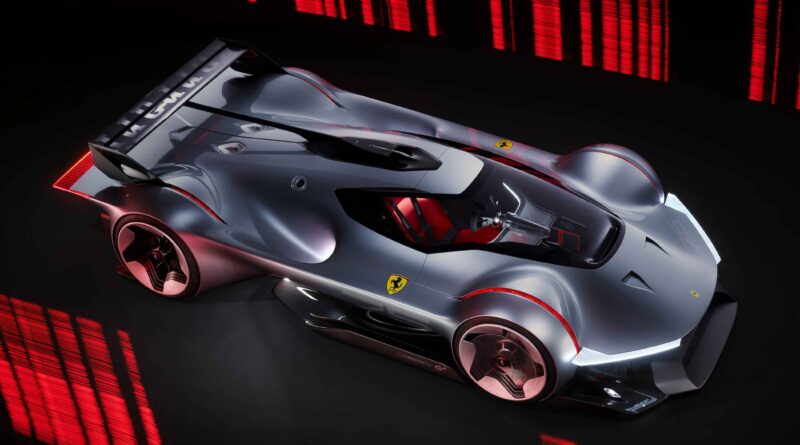 That console racing game is Gran Turismo, the unquestionably legendary PlayStation driving simulator, and the car is the Ferrari Vision Gran Turismo.

The basis of the car is the 499 Le Mans race car, which is real and which Ferrari will actually be racing. The Vision Gran Turismo is a single-seater, albeit with the enclosed wheels of a sports prototype. I guess that makes it a modern-day CanAm car, right?

Ferrari designers have styled the Vision Gran Turismo under the leadership of Flavio Manzoni, director of Ferrari Centro Stile. The Vision Gran Turismo is, incidentally, the final piece in Ferrari’s 75th anniversary celebrations, marking the date in 1947 when the first Ferrari 125 S made its way out of the Maranello factory gates.

Ferrari says that the Vision Gran Turismo has futuristic styling, but it pays homage to classic Le Mans racers such as the 330 P3 and 512 S. If you ask us, it’s a lot closer to the 512 S — all muscles and latent brute force — than it is to the feminine prettiness of the 330.

The aerodynamic concept used two massive channels, feeding airflow up and over the cockpit and down the body sides. At the back, the rear diffuser and the bi-plane rear wing are supposedly inspired by those of the 499 race car. Again, we’d remind you that all of this is for a video game. It’s not real.

The engine is based on the 499’s V6 turbo hybrid setup but gets four-wheel drive, three electric motors (one for the rear axle and one each for the front wheels), and produces a whopping 1,356hp. There’s a digital 1,100Nm of torque too.

Ferrari has been taking this all a bit seriously. According to the Italian sports and race car manufacturer: “Cutting-edge electronic vehicle controls endow the car with the unrivalled cornering agility and handling balance that Ferrari’s road and racing cars have long been renowned for. The in-game experience is thus designed to faithfully replicate Ferrari’s in-car driving thrills, conveying an accurate feeling of the limits achievable and enhancing the car’s performance.”

The car has even been developed, specifically around the tyres used by Gran Turismo, even though we’d remind you that these tyres are entirely fictional.

Inside, the digital cockpit gets see-through panels so that you can admire the mechanical intricacy of things such as the steering column, mirroring the transparent engine cover that allows you to peer at the V6 engine.

From the 23rd of December, you can buy the Ferrari Vision Gran Turismo through the video game. Ferrari will make a full-size mockup of the Vision Gran Turismo, which it will display. You’ll be able to visit the real-world mockup at the Ferrari museum, where it will be shown off alongside other one-off designs until March next year.