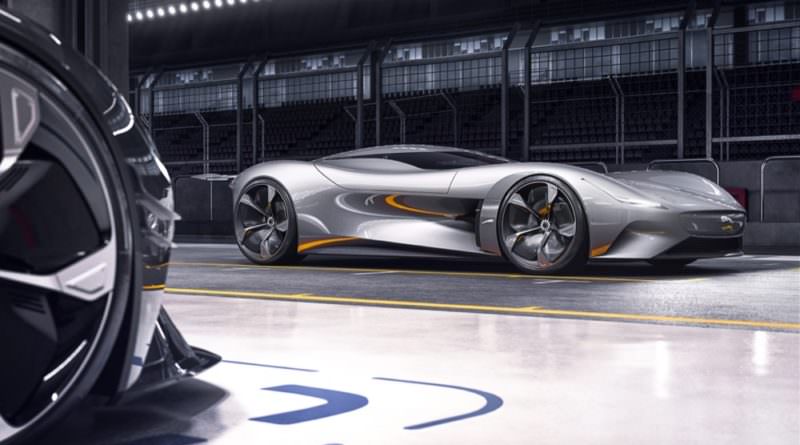 Inspired by the iconic C-type and D-type racers, the Jaguar Vision GT joins the Gran Turismo Sport game in November.

The Jaguar Vision GT won’t be hitting public roads anytime, well, ever, but from the end of November 2019 you will be able to drive it in the Gran Turismo Sport on the Playstation 4. The super sleek electric sports car boasts incredible performance figures including acceleration from 0-100km/h in “less than two seconds” and a top speed exceeding 320km/h.

Its design features a wrap-around windscreen canopy that lifts and moves forward to allow its occupants to gain access to the two-seater cabin. Its low-slung carbon fibre chassis and lightweight bodywork see the driver lying almost flat in the car.

“We’ve really pushed the limit to imagine how a future Jaguar sports car interior could look. The architecture is visually lightweight, simple, and dramatic; featuring advanced and experimental materials and finishes. Sitting in the stunningly considered cockpit and looking out onto the gracefully long bonnet of the Jaguar Vision GT Coupé – a view that is unmistakably Jaguar – the player will be fully immersed in the action,” said Chris Shaw, Interior Designer as Jaguar Advanced Design.

Drawing influence from past design classics like the C-type, D-type and E-type, the Jaguar Vision GT has some exquisite lines including sharp-looking LED daytime running lights that we expect to be a hint to the next F-Type. As its speed increases, a large rear wing deploys from the car’s tail and expands to provide more downforce.

Oliver Cattell-Ford from Jaguar Advanced Design oversaw the exterior design of the car relished the opportunity to work on the vehicle. “This was the dream project for a car designer, creating a futuristic sports car for Gran Turismo means our designs and ideas could be truly limitless. It has to excite future generations and most importantly, look and feel unmistakably Jaguar.”

The creation of the car’s electric powertrain came with the help of engineers from the I-Pace eTrophy racers and the I-Type 4 Formula E team. It is powered by three compact electric motors, with one on the front axle and two on the rear producing a total power output of 1,020hp and 1,200Nm. Carbon fibre composite bodywork and chassis construction along with advanced aluminium alloy wheels mean the Jaguar Vision GT tips the scales at just 1,400kg and benefits from an even 50:50 weight distribution.

Jaguar hasn’t said what kind of battery system the car runs, but it does feature twin-charging ports on each of the rear haunches, serving as a nod to the 1968 XJ saloon that famously had a fuel filler on each side.

It will also have quite a unique sound. To create it, the game’s creators worked with the engineers who produced the digital sound that features in the cabin of the electric Jaguar I-Pace. The basis came from new recordings of the ‘603’ Long Nose D-Type that had a podium finish in Le Mans in 1957. The 3.8-litre XK engine formed a base layer that was then altered and mixed, resulting in a futuristic soundtrack.

James Barclay, Team Director of Panasonic Jaguar Racing, said: “The opportunity to take what we have learned on the track from our time in Formula E and apply it to a futuristic Jaguar race car has been a great challenge for the Jaguar Racing engineers. With its all-electric motor design drawing on the technology from both the Jaguar I-TYPE 4 and eTROPHY race cars, we have accurately modelled the performance of the Jaguar Vision GT Coupé in the virtual world, creating a car that will be exhilarating to drive and a real threat to the competition.”

Competitors in the latest round of Sony’s Gran Turismo World Tour event at the Tokyo motor show will be the first to drive the Jaguar Vision GT. Following that it will be available for players to download in Gran Turismo Sport on the Playstation 4.

dating for plus size ladies