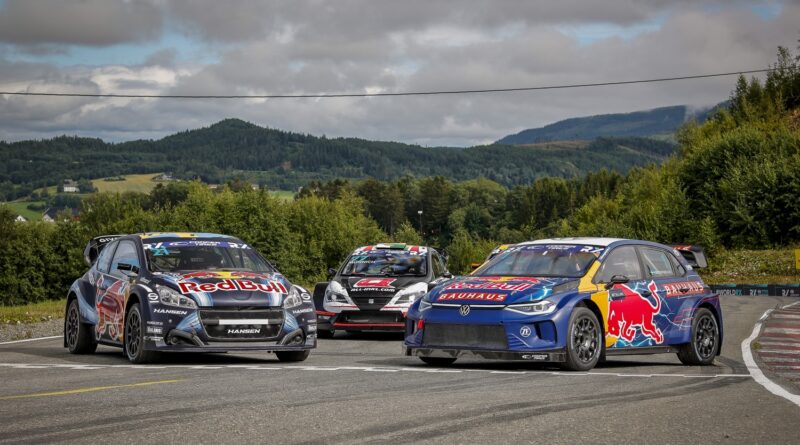 The new top-tier FIA World Rallycross Championship cars may look the same as the old ones, but their familiar bodies hide a high-voltage secret.

Best-known for its crashes, jumps and flying mud and gravel, the FIA’s World Rallycross Championship has decided to clean up its act with the launch last week in Norway of the series’ new, fully-electric, top-level RX1e cars.

The RX1e class replaces the old Supercar/RX1 category at the highest level of the championship, and at first glance, the new cars look almost exactly the same as the old ones.

Returning are the factory-backed Volkswagen Polo R5 of Johan Kristoffersson, the twin Peugeot 208s of Timmy and Kevin Hansen and the Münnich Motorsport Seat Ibiza. While the bodies look the same, they hide the extensive re-engineering these cars have undergone to turn them into all-electric racers.

Contrary to some of the rumours being bandied around the paddock, the RX1e cars’ underpinnings aren’t based on the platforms of new electric models such as the Volkswagen ID.3 or the Peugeot e-208, but rather those of last year’s cars which have been tweaked to accommodate a new dual-motor electric powertrain.

That powertrain was developed by the Austrian firm Kreisel. It uses a 330kg, 52kWh battery pack (making the cars slightly heavier than last year) to run a pair of 250kW motors front and rear, developing 680hp and 880Nm of instant torque.

The immediate result of all this is acceleration which, at 1.8 seconds from 0-100km/h, could be understatedly described as “rapid” or, perhaps more accurately, in the words of the CE Dealer team’s Klara Andersson, “brutal”.

Because the Kreisel powertrain is a modular set-up, it wasn’t a case of it just slotting easily into the old cars. Fitting it into the Kristoffersson Polo and the Hansen 208 was a major challenge, especially as these cars weren’t originally designed to house a battery pack. Some of the engineering is, admittedly, a little awkward with the battery pack not quite able to be stacked flat and skateboard-style under the floor, but with parts of it intruding into the interior compartment.

Cooling too presented another challenge, given the tight racing and relatively short bursts at full throttle. The battery cells are cooled by direct contact with a new cooling fluid specially developed by Shell. That’s expected to contribute significantly to the longevity of the new battery packs, which Kreisel guarantees to last for at least four years.

Intensely brisk acceleration for an electrified racing car might be entirely unsurprising, but how do the new cars compare to the old ones in terms of outright pace?

Very well indeed, it seems — all the more remarkable considering the hasty development schedule and relative lack of pre-season testing. Thanks to global supply chain issues, the new cars weren’t ready for the 2022 season opener at Höljes in Sweden, though the teams were in attendance and did manage to get in a few proving laps in the RX1e cars before and after the event. During the testing at Höljes, the four-time world champion Johan Kristoffersson believes, without the laps having been timed, that he set a new course record. Kristoffersson’s gut feeling seemed about accurate following the RX1e cars’ debut for the second event of the 2022 season at Hell in Norway, where he set a new lap record of 37.676 seconds around the tight kilometre-long track in his third heat of the weekend, going on to win the event.

With the European Championship still petrol-powered for now and running a number of its events in parallel with the World Championship, the series’ top-level Euro RX1 cars are the equivalent of the old World Championship RX1 cars. Throughout the weekend, the new RX1e cars proved consistently faster, though usually only by a few tenths of a second — a margin the teams all hope to broaden.

The World Rallycross Championship’s switchover to electrification is noteworthy in that it’s the first FIA world championship to do so, as opposed to sports such as Formula E and Extreme E, which were all-electric from their outset.

Even though the idea of electrifying rallycross was first mooted in 2018, the real impetus didn’t come until 2020 with the launch of Projekt E, a new sub-class below Supercar/RX1 and RX2. So successful was Projekt E at proving the viability of switching the series over to electric power that from 2021, the RX2 category was replaced by RX2e, using generic bodies and powertrains with dual motors, all-wheel drive and 340hp. Drivers liked it; they liked the precision and instant power delivery of the electric motors compared to laggy turbocharged engines; they liked not having the sound of their gripping tyres drowned out by a raucous exhaust. It was only a matter of time before the Supercar/RX1 class changed.

The rules surrounding the new RX1e cars are relatively lax, and, provided they use the same basic Kreisel drivetrain, teams can theoretically race using any body style they like. This factor opens the door for one of the most exciting entrants in the 2022 season — one whose car wasn’t ready for Hell and isn’t likely to be ready for another couple of months: GCK Motorsport.

Whenever GCK fully readies their car, it will be one of the most eye-catching on track, using as it does the body of the Lancia Delta Integrale, the eighties and nineties rally star, based on GCK’s own electric Delta restomod.

The return of the retro Delta (sort of) to motorsport is sure to bring new eyes to rallycross, and they’re eyes the sport deserves. With the arrival of the new RX1e cars, rallycross is quieter than before, but it’s also faster. Once the cars are further developed, it has the potential to be a lot faster still.