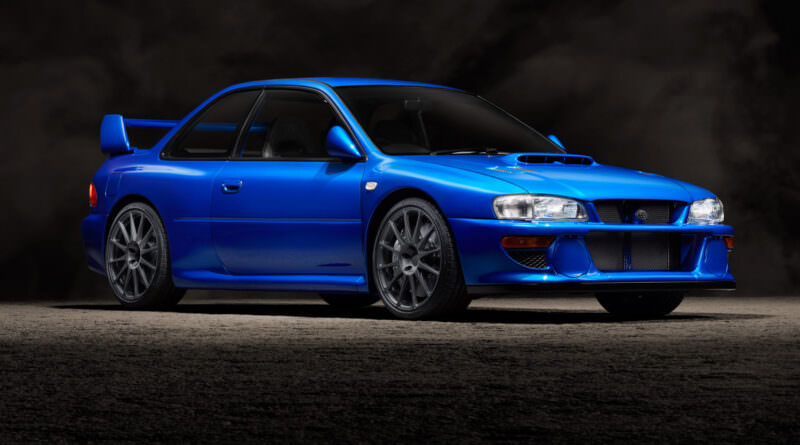 You know they say you can only afford the cars you dreamed of as a kid once you’re older and richer? Car companies have been trading off that fact for decades now, building ‘recreation’, ‘continuation’, and ‘reborn’ versions of classics to re-sell to an audience that once had their noses pressed against dealer windows but who now have the requisite chequebooks to walk inside and drive back out.

Jaguar has done this with new-for-old C-Types, XKSS, and E-Types. Land Rover has done it with the Series 1 and the first-generation Range Rover. Porsche hasn’t done it officially, but Singer has created an entire sub-culture of restored and improved classic 911s.

The new (old) car is appropriately named because it’s been 25 years since the launch of the original P1 version of the Subaru Impreza WRX. That car was built, as were all of Subaru’s works rally cars, by Prodrive. Based in Banbury, Oxfordshire, Prodrive was founded by one-time rally world champion co-driver Dave Richards. The company has been the force behind motorsport success for the likes of Subaru in rallying (three world titles with Colin McRae, Richard Burns, and Petter Solberg), Aston Martin (helping the marque return to Le Mans in the early 2000s), and British-American Racing (bringing the team to respectability, and its first win, in Formula One).

Now, with resto-mods all the rage, Prodrive wants to dip into the pockets of those who were in their teens when McRae and Burns were whipping through forests and long tarmac stages in their bright blue, gold-wheeled Imprezas.

In 1998, Prodrive built the stiffer, lighter, two-door Impreza WRX, building 424 road-going versions, badged as Impreza 22B. The cars became instant collector items, and now they’re set to be again as Prodrive is going to build a run of 25 improved and updated cars, badged as P25.

The styling might look identical to the original, but the mechanical package has been massively updated. Much of the car’s structure is now made from carbon composite, trimming the weight to 1,200kg. The original ‘Boxer’ flat-four turbo engine has been bored out to 2.5-litres. It now develops 400hp and 600Nm of torque (up from the original’s 280hp and 363Nm. The growling, grumbling soundtrack remains as it was (and it’s still one of the most glorious sounds in motoring, up there with a Ferrari V12, a Ford V8, and a BMW straight-six. It’s going to be travelling much faster than before — Prodrive claims that the P25 will hit 100km/h in just 3.5secs, thanks to a combination of a six-speed semi-automatic gearbox, WRC-derived launch control and turbo anti-lag. The original took a hardly-sluggish 5.2secs.

The boot, bonnet, roof, sills, door mirrors, front and rear quarters, WRC style rear wing and bumpers are now made from carbon composite, while you can also spec your P25 with lightweight carbon-backed bucket seats and a lighter lithium-ion battery. The engine is still a Subaru unit, but it has been treated to bespoke Prodrive components, including cylinder liners, pistons, con rods, and a valve train with variable cam timing.

That six-speed sequential shift can bang through each of its ratios in 80 milliseconds, and the car now has a fly-by-wire throttle. Needless to say, the P25 gets four-wheel drive, but Prodrive has updated the suspension, keeping the basic McPherson strut layout but with machined aluminium uprights, which can be tuned for camber and geometry optimised for the wider 1,770mm track. There are also bespoke adjustable Bilstein dampers.

Keeping all of this rally-style potential in check are AP Racing brakes with 380mm vented discs and six-piston calipers at the front and 350mm vented discs and four-piston calipers at the rear with floating bells and multiple pad options. The wheels have swollen from 17-inches for the original 22B to 19-inch items here, shod with Bridgestone Potenza 235/35/19 tyres which are specially matched to the car. The wheels are still gold, though — it wouldn’t be a rapid Impreza without them.

Inside, there’s what Prodrive describes as “a full-width high-definition multi-page display including a data logger.” You can adjust systems such as the throttle response and engine performance maps for track days, including anti-lag, to your taste/skill levels. Although there’s a modern electronic parking brake, a proper ‘fly-off’ mechanical handbrake automatically disengages the central differential for when you need to get that next hairpin juuuuuust right.

That aside, the cabin is said to be “authentically” that of the 1990s Impreza, albeit with leather, Alcantara and carbon trim. It’s a four-seater as standard, but you can optionally have the back seat taken out and replaced with a full roll cage.

Prodrive really has been putting the band back together for this one — Peter Stevens (whose design CV includes second generations of the Lotus Esprit and Elan and the epochal McLaren F1) has come back in to tweak the styling ever so slightly. The P25’s engineering work has been carried out by Dave Lapworth, the man who engineered the original works rally cars.

David Richards, Prodrive chairman, said: “The iconic blue Subarus bring back memories of an extraordinary era of the WRC and it was the Impreza 22B that brought this rally car performance to the road. By reimagining this car using the latest technologies and materials the Prodrive P25 pays homage to its roots and there will be little else able to match its performance on the open road. I therefore believe we have achieved our vision of creating our own modern interpretation of the most iconic Subaru Impreza ever.”

The P25 will get its first public outing at next week’s Goodwood Festival of Speed and will go on sale at a price of — wait for it — STG£460,000 + VAT, which is nuts for an Impreza but a bit more of a bargain by Singer standards. And given that Prodrive makes this one, we’d put cash money on it being faster, point-to-point, than a Singer…