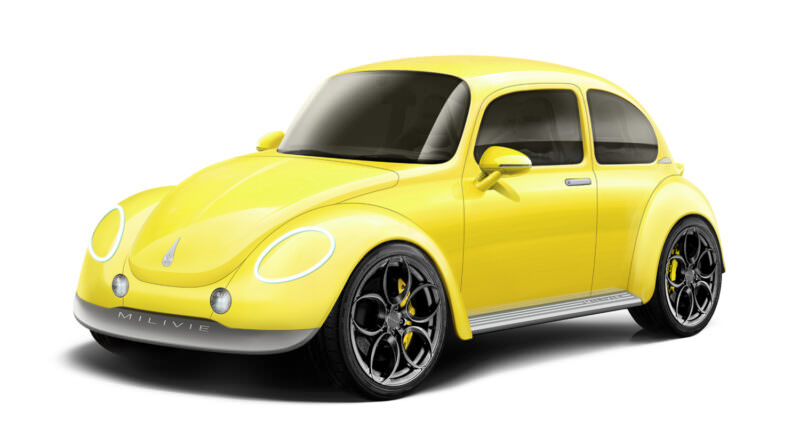 German start-up Milivié has revealed details of its VW Beetle restomod with big power, Porsche parts and a massive price-tag.

The Milivié 1 is a thoroughly modern take on the classic Volkswagen Beetle from a new German restomod start-up.

Using a seventies Beetle as the base for the build, Milivie’s creation leaves almost nothing of the original intact except the bare shell and floorboards, though even they are subject to extensive modification. What buyers end up with is a car which has been upgraded and updated in nearly every sense with a contemporary new look, a bang-up-to-date interior and far more power than an original Bug.

Milivié is a project begun by engineer Jonathan Engler, whose vision, the firm says, is “to celebrate extinct German automotive icons and discreetly re-engineer them anew to unimaginable standards.”

Discreet mightn’t be the right word for the exterior of the eye-catching Milivié 1. Despite looking like an old Beetle, it has seen some drastic changes.

Starting with a hand-picked 1970s Beetle 1303, the company strips away all the chrome elements, including bumpers that might mark it as being from a particular era. Its lines are altered, moving the bonnet forward by eight centimetres, changing the windscreen’s base and enlarging the front and rear wings to accommodate the visually huge 19-inch alloy wheels. The result is a slightly more aerodynamic car than the original Beetle with a wider, more purposeful look partly achieved by slightly turning out the edges of the wings and bumpers.

Removing the chrome gives the car a cleaner, more modern look, almost like an evolution of the old Beetle had it not stopped production in 2003 and Volkswagen not also introduced the New Beetle in the nineties. Body-flush units have replaced the door handles, while the modified engine cover at the rear gains a Porsche-style ducktail spoiler with integrated brake light.

However, the most noticeable visual change compared to the old Beetle is in the lighting, with flush-fitting head- and tail-light units inspired by the lights on the 1950s Porsche 718 RSK racing car. As well as little spotlights just above the lower apron, the headlights are ring-shaped, while the horseshoe-shaped lights at the rear add a sort of minimalist echo of the “elephant foot” originals found on Beetles from the seventies onwards.

The interior is modern, with barely a touch of pastiche visible beyond a few of the minor design elements which the company says are inspired by old Porsches and the original 1938 Volkswagen prototypes. The dashboard features a pair of 12.3-inch displays merged into one double screen spanning more than half the dashboard’s width, similar to the setup Mercedes-Benz uses for its MBUX system. Owners can configure the display in several ways, including one which mirrors the analogue displays of the original Volkswagen, replete with a digital rendition of an analogue clock. Also, unlike the originals are four individual heated bucket seats, their structures made from a carbon-fibre honeycomb, as well as wireless phone charging and USB ports.

Powering the Milivié 1 isn’t an electric motor or even a Porsche flat-six but an engine based on Volkswagen’s original, though with a displacement of 2,280cc rather than 1,303. Fuelled by twin Weber carburettors, the engine features expanded oil channels, two oil pressure regulating pistons, individually balanced crankshafts, and a free-flowing stainless steel twin exhaust. A lightweight aluminium fuel tank is still located under the bonnet.

Milivié hasn’t mentioned the engine’s power output, though a rendering of the interior shows the digital speedometer reading 187km/h. Whether that’s an aspiration or a promise is hard to say, but whatever the case, the power goes to the rear wheels through an automatic transmission by ZF, sourced from a Porsche 911 but adapted for use in the Milivié 1. The gearbox is controlled by the company’s software, allowing drivers to choose Sport mode for more enthusiastic driving in addition to a setting for regular motoring. There’s also the option of Manual mode, in which drivers can opt to change gear themselves with an optional gear shifter which works with the same gearbox.

Since an old Beetle isn’t built to handle lots of power, Milivié has reworked the car’s chassis, suspension and brakes. The suspension now features independent double wishbones front and rear and bespoke new springs and dampers. The rest of the driving setup in terms of height, toe and camber can be altered to suit the buyer’s preferences and driving style, and stopping the Milivié are all-round disc brakes with six-piston calipers up front and four-pots at the rear.

Because more than 1,000 hours of work goes into each car, the Milivié 1 doesn’t come cheap. In fact, it’s a staggeringly expensive €570,000 — quite some piece of inflation compared to Ferdinand Porsche’s car of the people. Although Volkswagen built more than 21.5 million Beetles between 1938 and 2003, Milivié, on the other hand, will build just 22.