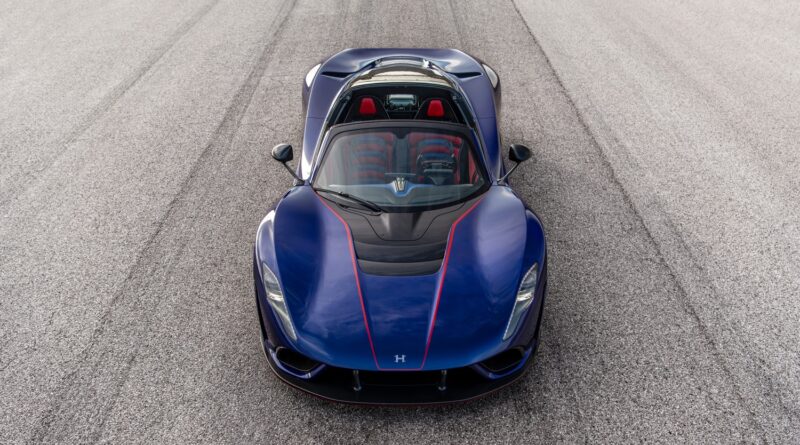 Hennessey Special Vehicles has revealed details of a new model, a convertible version of its Venom F5 hypercar, which it describes as “the world’s fastest and most powerful roadster.”

Ahead of the Venom F5 Roadster’s debut at Monterey Car Week, the Texan company believes the F5 Roadster will be capable of breaking the magic 300mph (483km/h) mark, giving it a shot at becoming officially recognised as the fastest road car in the world.

The 6.6-litre twin-turbo V8 engine designed in-house by Hennessey develops an astonishing 1,842hp. That power is sent to the rear wheels through a single-plate clutch.

Thanks to the car’s lightweight construction using a carbon fibre monocoque chassis, it weighs in at just over 1,400kg. That means the engine doesn’t have a whole lot in the way of mass to lug around, and turning the Venom F5 into a convertible hasn’t made much of a difference either. The single-piece carbon fibre composite roof panel weighs just 8kg, making removal a simple, one-person job with just four quick-release bolts and two latches to undo.

Beyond going roofless, not much has changed compared with the Venom F5 coupé, though new for the Roadster is a tempered glass viewing window over the engine allowing the V8 to be admired while the car is stationary. The glass was “developed and certified for use in jet aircraft” and, as well as withstanding speeds of more than 483km/h, can handle temperatures of over 530 degrees Celsius.

The forged aluminium alloy wheels are different, with seven spokes, each resembling an elongated letter “H”. Milled into the outer face of each wheel rim is “Hennessey” lettering, with “Roadster” mirrored on the opposite side. Owners can upgrade to highly-polished aluminium rims, finishing of which, said the small firm, takes weeks to complete.

“We created the Venom F5 to be the ultimate expression of a hypercar,” said company boss John Hennessey. “The Roadster version takes the Coupe’s speed, exhilaration, and awe, plus a sprinkling of respect-inducing fear, to a new, truly visceral level that brings owners closer to the Venom F5’s extreme performance. Our 1,842hp ‘Fury’ engine screams behind the exposed cockpit, with its roar unobstructed by a roof — it is an unmatched automotive experience.”

Now, there are a couple of things to note as regards Hennessey’s claims of building the fastest convertible in the world and of the Venom F5 being able to exceed 483km/h.

Hennessey holds the official record for the world’s fastest convertible, but it’s not with the F5 Venom, and it certainly isn’t more than 483km/h. Officially, the fastest convertible in the world is Hennessey’s last effort, the Lotus-based Venom GT Spyder, with a top speed of 427km/h.

There are also road cars which can exceed the 483km/h figure — a Bugatti Chiron Super Sport 300+ hit 490km/h (304mph) in 2019. Although it was officially verified, because an official record demands a two-way run to account for slope and wind, the Bugatti’s test run was not counted as a world record.

We should point out that for now, the Venom F5 has not come anywhere near 483km/h. On a recent test run at the old 5km-long Space Shuttle runway at the Kennedy Space Centre in Florida, the Hennessey did hit 435km/h, not too far off what is currently the official record for the world’s fastest production car — the 447km/h set in 2017 by a Koenigsegg Agera R.

Speaking recently to CompleteCar.ie, John Hennessey said that the company was currently in the process of trying to find an eight to ten-kilometre section of public highway in Texas which would be suitable to temporarily close to allow the Venom F5 to reach its claimed top speed and slow back down again. He believes no runway is long enough to allow the Venom to achieve the speeds the company believes it is capable of producing. For now, the world’s fastest production car accolade officially remains with Sweden’s Koenigsegg.

Just 30 examples of the Hennessey Venom F5 Roadster will be built, starting from around the €2.9 million mark.