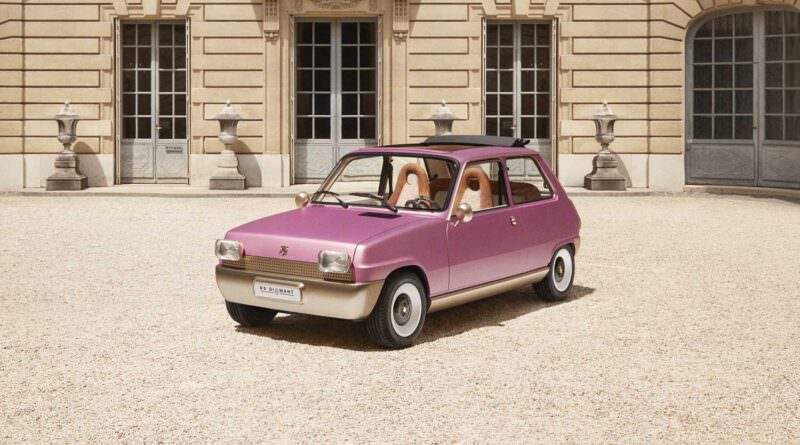 Renault has unveiled the stunning R5 Diamant, a battery-electric show car created to mark the 50th anniversary of the launch of the Renault 5 supermini back in 1972.

Designed in collaboration with the French architectural designer Pierre Gonalons, the inspiration for the Diamant’s design came from the jewellery and the decorative arts. Despite this, however, and despite the little flourishes throughout, overall the Diamant is cleaner and more streamlined in its appearance than even the utilitarian first-gen Renault 5.

Unusually, the headlights aren’t flush with the front end, standing proud on stalks almost like the lights on that other French icon, the Citroën 2CV. The same is true of the rear lights; both ends feature a diamond-like finish. Adorning the bonnet is a one-off badge finished in a gold colour combining Renault’s latest Nouvel R logo with the interlocking “PG” initials of the designer.

The exterior colour is a combination of three layers of paint: golden pigments on a pink base, covered with frosted varnish producing a variety of effects ranging from golden dashes in the sunshine to bluer tones in the dark. The combination of pink and gold almost gives the car a rose gold hue making it appear a contemporary rendition of a seventies classic.

The whole car sits on a set of wheels wider than that of the original (they’re the width of those of a Renault 5 Gordini, one of the earliest hot hatches) and features a clean, modern — though retro-inspired — design with a golden solar symbol in the centre.

Like the outside, the interior is pared back compared to the original. The steering wheel is a far more baroque affair, seemingly made from twisted marble cylinders though Renault insists that odd design “does not make it any less driver-friendly.” Reflecting the designer’s architectural background, interior fittings such as the door handles, window winders and three-position gear selector are made from brass gilded in pale gold like the doorknobs in an old-fashioned upmarket Parisian apartment.

The intention of the car is to showcase French craftsmanship and several of the design elements were created by artisans with whom Gonalons works on a regular basis. The horsehair fabric covering the dashboard is made by Le Crin, a century-old establishment that weaves the material by hand, while the mohair wool carpet is made by one of France’s last tapestry makers.

Retro appeal notwithstanding, the Diamant features plenty of modern tech. No specific details have been revealed about the powertrain beyond the fact that it’s battery-electric, but other ultra-modern touches include a fingerprint scanner to unlock the doors. Three round digital dials pay tribute to the art of clockmaking and provide only the essential information: speed, battery charge and time. As for navigation and infotainment, there’s a slot in the dashboard for the driver’s smartphone, much like that seen on the base model Dacia Jogger.

“I am honoured by Renault’s invitation to reinvent the mythical Renault 5 for its 50th anniversary. The brand gave me free rein to design my dream car,” said Gonalons. “As I see it, the Renault 5 embodies a pop, upbeat and categorically contemporary lifestyle. What I wanted to do with Renault 5 Diamant was pay tribute to its revolutionary design and at the same time transfer the shapes and colours in my universe to the automotive world.”

Renault says that the Diamant will be put up for auction in September or October, with the proceeds from the sale going towards Give Me 5, the brand’s new project to reach out to disadvantaged young people through music and sport.

Even if they don’t manage to secure the sole Diamant, those who’d like to get their hands on a cool, electric Renault 5 won’t have to miss out entirely. In the next two to three years, Renault plans to launch a new electric supermini, set to be called the R5 and to feature retro-inspired styling that will replace the Zoe. Even better, there are strong hints about an Alpine hot hatch version in the works.