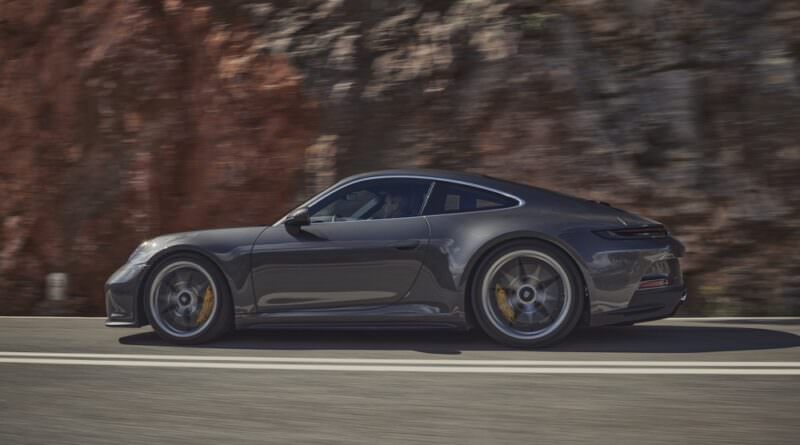 Here comes the Porsche 911 GT3 Touring for those that want all the performance with a more discreet public image.

Just as night follows day, the Porsche 911 GT3 is being followed up with a more subtle Touring version. It ditches the fixed rear wing in favour of a rear spoiler that automatically deploys as the speed ratchets up. Back up at the front, the 911 GT3 Touring retains the same vented bonnet, but the lower bumper is colour-matched to the bodywork. This look is different from the black colour of the winged GT3 that gives the appearance of having a more prominent lower intake.

The interior retains those gorgeous sport seats with exposed carbon fibre structure and a cabin design that has a look and finish that we’ve come to expect from Porsche. An extended leather trim finished in black is another exclusive feature of the GT3 Touring, as are the door trim panels and dashboard fascia.

Despite the new 911 GT3 getting a wider body and larger wheels, not to mention all of the tech features inside, it tips the scales at 1,418kg with a manual gearbox, putting it on par with the last generation. However, the PDK-optioned GT3 does weigh slightly more at 1,435kg. Among the weight-saving features that help Porsche manage the GT3’s mass are lighter glass windows, a lightweight exhausts system, carbon fibre-reinforced plastic (CFRP) bonnet and forged alloy wheels.

Being a driver’s car, the GT3 Touring gets a six-speed manual gearbox as standard. For those that prefer the 7-speed PDK dual-clutch auto, it now comes as a no-cost option. Official performance figures give the manual GT3 Touring a top speed of 320km/h (199mph), while the PDK can muster only 318km/h (198mph).

However, it more than makes up for the top speed deficit when it comes to acceleration, getting from 0-100km/h in 3.4 seconds. With the manual, that sprint takes 3.9 seconds. In case you missed it with the debut of the standard GT3, Porsche uses a naturally-aspirated 4.0-litre flat-six engine that produces 510hp and revs to 9,000rpm.