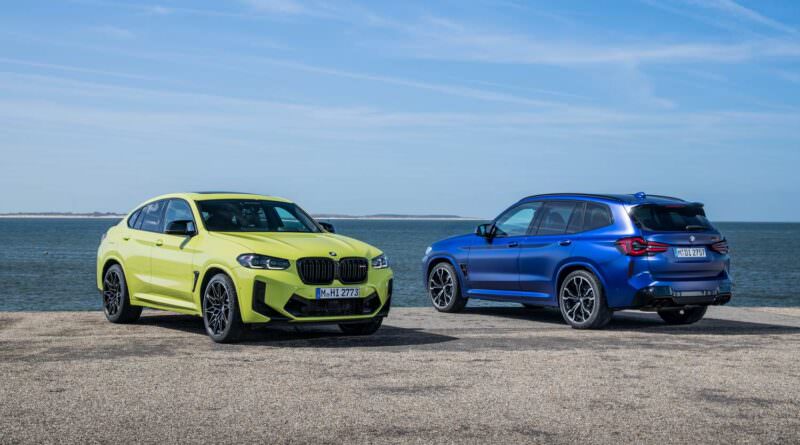 The high-performance BMW X3 M Competition and BMW X4 M Competition have come in for an overhaul as part of the usual mid-cycle refresh. Among the visual changes to the front is a more prominent kidney grille design in a one-piece frame and carries a gloss black paint finish. A central black bar down the middle is home to the front-facing camera. According to BMW, the new headlight design makes them 10mm flatter than before and are adaptive LED units as standard. Optionally buyers can specify BMW Laser Light units.

A new front bumper design makes a noticeable change from its predecessor due to each side’s vertical air intakes. It’s a similar story at the rear, where a new bumper design adds more contrasting gloss black on the lower portion surrounding the exhausts. In addition, the BMW X3 M Competition gains a unique rear light cluster design recognisable by a slimline light signature graphic that is quite different.

On the BMW X4 M Competition, this black element is more dramatic due to its anvil shape that swallows in the number plate area. This design adds to the impression of it having a monster rear diffuser when you squint your eyes. It is the more aggressive of the two and it’s good to see BMW attempt to create more differentiation between the models.

Although the total power output remains unchanged at 510hp (not that we’re complaining), the torque output does increase by 50Nm to a whopping 650Nm. That’s enough to shave an additional 0.3 seconds from the sprint to 100km/h, a task that now takes just 3.8 seconds.

Part of that is also down to the performance of the 8-speed M Steptronic transmission and M xDrive that can send power to all four wheels. BMW limits the top speed to 250km/h as standard, but choose the optional M Driver’s Package and the figure rises to 285km/h.

Interior updates see a bespoke M View for the 12.3-inch Live Cockpit Professional display carries over from the BMW M8. BMW makes Driving Assistant Professional available for the first time and it enables over-the-air updates for software. Both models’ control island is the same layout as the BMW M3 and M4, with a red engine start button and new switches for setup and M mode.

Electrically adjustable M sports seats are standard and carry the illuminated M logo. BMW is increasing the choice of materials available with Merino leather trim in four colour combinations. Other detail changes to the interior include a galvanised finish for the air vents in Dark Aluminium Rhombicle as standard.