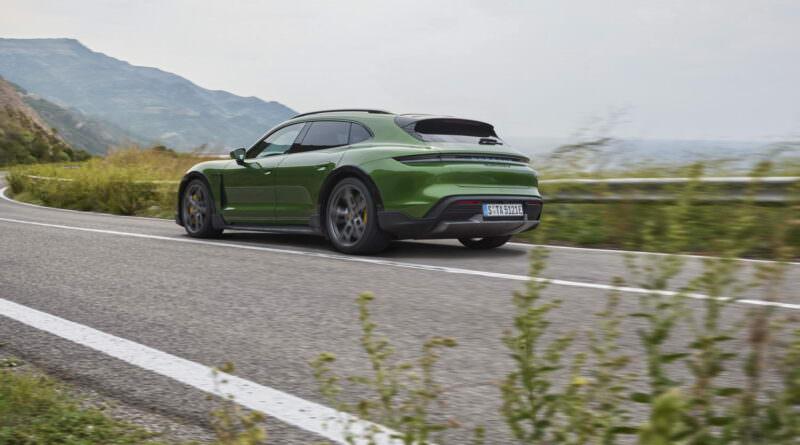 The electric section of Porsche’s lineup expands with the introduction of the Taycan Cross Turismo. Following on from the four-door saloon, the five-door Cross Turismo adds more versatility to the electric platform and looks fantastic.

Porsche made no secret of this model joining the lineup and previewed it with the Mission E Cross Turismo at the 2018 Geneva Motor Show. Many of the design elements of that rugged concept car have carried across to the production model. This design includes the additional protective cladding that wraps around the bumpers, sills and wheel arches to give that off-road look.

It uses the same 800-volt electrical architecture as the Taycan, with a driving range of up to 455 kilometres and the ability to charge at high speeds where possible. Along with the different body style, the Taycan Cross Turismo can provide up to 1,200 litres of cargo capacity, and thanks to the longer roofline affords rear passengers 47mm more headroom.

There will be four versions of the Porsche Taycan Cross Turismo available at launch to offer buyers a choice in performance. All will use the ‘Performance Battery Plus’, which is a 93.4kWh unit. The range starts with the 380hp Taycan 4 Cross Turismo, and with the launch control function, gets a maximum power output of 476hp. It will accelerate from 0-100km/h in 5.1 seconds and has a top speed of 220km/h. The WLTP combined driving range is 389- to 455 kilometres.

A sportier Taycan 4S Cross Turismo gets a power bump to 490hp (with 571hp available with launch control) for a 0-100km/h acceleration of 4.1 seconds, a full second faster than the base model. Top speed also increases slightly to 239km/h. The range is also unaffected, with the WLTP figure falling between 387 and 452 kilometres.

The performance moves up a notch with the Taycan Turbo Cross Turismo, with a 0-100km/h sprint taking only 3.3 seconds. The power output is 625hp, with that figure rising to 680hp during launch control. Surprisingly, range figures aren’t greatly impacted, with Porsche quoting WLTP of 394 and 452 kilometres. However, utilising that launch function will put a dent in those figures.

Topping the range is the Taycan Turbo S Cross Turismo, packing a maximum output of 761hp in lunch mode and generally offering 625hp. It’s faster still under acceleration, hitting 100km/h in 2.9 seconds and onto a top speed of 250km/h. According to official figures, being the most potent version also means it has the shortest claimed WLTP range, between 387 and 418 kilometres.

Every version of the Cross Turismo is equipped with Porsche Active Suspension Management (PASM) that uses three-chamber adaptive air suspension with electronic damper control. An optional Off-Road package increases the ground clearance by another 10mm, for a total of 30mm over the Taycan saloon.

An Off-Road Design package adds special vanes on the corners of the bumpers at either end of the car. Apart from the visual look, these are said to provide better protection from stone impacts.