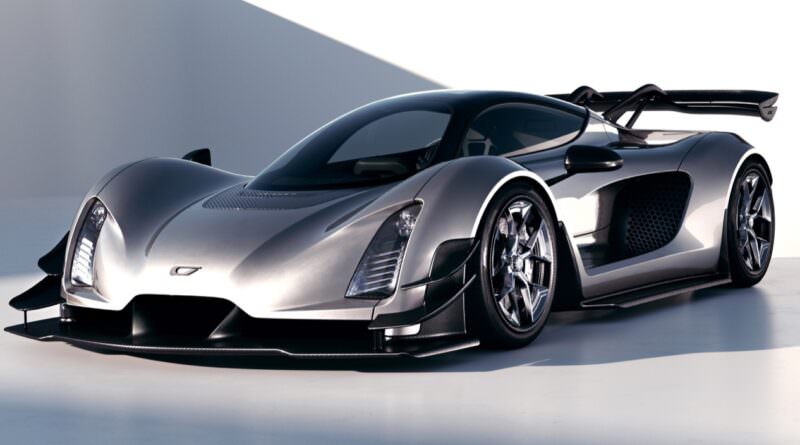 Czinger (the C is silent, so you pronounce it ‘Zinger’), the Los Angeles-based hypercar startup, has shown off the production version of its C21 two-seat high-performance missile.

How powerful? Well, the combination of a 2.88-litre twin-turbo V8 engine and two front-mounted electric motors adds up to 1,250hp. Czinger has said that it will, optionally, upgrade that firepower to 1,350hp if you tick the correct options box. The front electric motors run at 800-volts and can torque-vector power from one wheel to the other. Power from the V8 goes to the rear wheels via a seven-speed manual gearbox. Czinger claims that the V8 engine can run on “a range of fuels, including carbon recycled methanol and other e-fuels, so it can be run as a zero-emission vehicle.”

Even with the ‘basic’ power output, the C21 achieves a 1:1 power-to-weight ratio, thanks to weighing just 1,250kg — so you get 1hp per kg. That should make it ridiculously quick.

Indeed, Czinger claims a 0-100k/h time of just 1.9secs for the C21. If that doesn’t sound ridiculous enough, it also claims that the C21 will accelerate from 0-300km/h and back to 0km/h again in just 13.9secs, and will get to 400km/h and back to a standstill in just 27secs. The top speed? Czinger doesn’t quote one, but as it quotes a 0-400km/h acceleration time of 21.3secs, you can expect that it exceeds that figure.

The C21 gets two optional aerodynamic packages — a high-downforce setup, primarily designed for track work, and a low-drag ‘V-Max’ one, for exploring the upper reaches of the car’s performance, assuming you own an airfield. Which, if you can afford a Czinger, you probably do.

The C21’s construction is pretty clever, too. The company says that it has employed Artificial Intelligence to help it design a strong but light chassis and that it has used 3D-printing style systems to reduce weight as much as possible. For example, the front suspension upper control arm is hollow with internal structures allowing it to achieve significant weight savings compared to a traditional tooled variant, thereby significantly reducing un-sprung mass.

Unlike most startup hypercar makers, Czinger isn’t buying in any major components — its V8 engine, gearbox, and chassis are all made in-house.