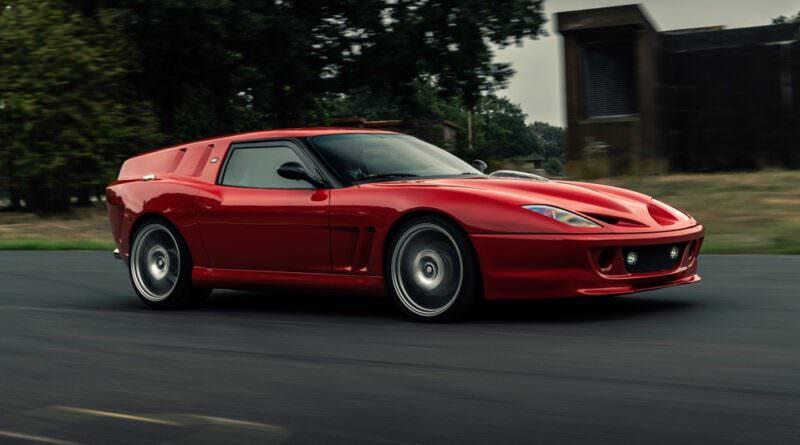 Sixties-style aero-body Breadvan Hommage based on a Ferrari 550 Maranello.

Aerodynamics is a funny subject. It should seem obvious that a teardrop shape would be the most aerodynamic possible layout for any vehicle. And it is — a teardrop shape slips through the air with the minimum of fuss. It’s tricky, though. That same teardrop shape is directionally unstable and it can trigger lift where you don’t want it on a ground-bound vehicle. Plus, it involves a lot of wasted metal at the rear of a car if you’re going to make one.

Enter aerodynamicist Wunibald Kamm, who in the 1930s, while working at the University of Stuttgart, discovered that you could, essentially, fool airflow into thinking that a teardrop shape was in place when it wasn’t. By cutting off the teardrop shape, into a sharply-angled end, forever known after as a Kamm-tail or Kamm-back, the airflow around a car would somehow ‘think’ that the teardrop shape was there, and act accordingly. Better yet, the Kamm-tail provides better stability.

One of the most radical uses of a Kamm-tail was the 1962 Ferrari 250 SWB ‘Breadvan’ — a racing car designed by the great Giotto Bizzarrini at the behest of Count Giovanni Volpi, owner of the Scuderia Serenissima racing team. Volpi wanted a car based on the older 250 SWB that would be competitive on race tracks with the newer 250 GTO. Bizzarrini’s solution was a dramatically aero-styled body that carried the rear bodywork backwards to a sudden, almost violently, cut-off Kamm-tail. The elongated roof made the racer look like a delivery van, hence the Breadvan was born. Incidentally, the Breadvan still exists and is regularly raced at the Goodwood Revival.

Now, though, there are two Breadvans – Bizzarrini’s original, and now a ‘Hommage’ created by Netherlands-based Niels van Roij design. You’ll have heard of van Roij before — he’s the designer and coachbuilder who created the ‘Adventum’ two-door Range Rover coupe when Land Rover wouldn’t, and who made the Rolls-Royce Wraith-based’ Silver Spectre’ shooting brake estate.

Niels van Roji’s latest creation, the Breadvan Hommage, is based on a Ferrari 550 Maranello, but it has been entirely re-bodied and retrimmed. “We see it as a great privilege that we can celebrate the ’62 Breadvan through this Hommage commission,” says Niels van Roij. “It was a complex task to translate the essence of the legendary car into a contemporary design. We intended to be inspired by the original but ensured we were not limited by it in our creativity. The Breadvan Hommage is a new original.”

“Automotive design is about the search and the experiment” according to van Roij “Which is only truly achievable in a handmade sketch. In the ideation sketches, differences can not only be seen in proportions and surfacing, the skin of the car but also in the application of graphics and other details. Such as the bespoke exhausts and unique headlights. Eventually, this process produces a so-called key sketch: the one sketch chosen to be developed into more elaborated, rendered ideas.”

To create the Hommage, van Roij and his team build a framework body over the mechanicals of the original 550 onto which a clay model of the new rear Breadvan shape was built. That allowed them to better create the surface transitions from the side to the top and the design of air intakes, rear lights, and the bonnet’s opening. It’s a long, long way from simply plonking a sixties-style Kamm-tail onto an existing car.

Van Roij: “A car is a complex, three-dimensional sculpture, which has to look right from all angles and under different light circumstances. Like sketching, the clay modelling process is iterative, and the Breadvan Hommage was reshaped many times, to get it spot-on. After establishing the correct proportions, the search for sophistication in the surfacing, or skin, started: finding the right subtleties for transitions from one element to another. It includes the exterior graphics like the richly sculpted air vents on the front fenders.

To create the final, aluminium bodywork, van Roij called in Bas van Roomen. He works on behalf of collectors and high-end restoration companies. He is one of only a few in the Netherlands that builds modern coachbuilt cars, such as the Breadvan Hommage, and the Adventum Coupe. Bas also worked on the clay model of the Breadvan Hommage. Only the windscreen of donor 550 remained, and it was painted in one of the eight specially designed reds.

Inside, van Roij has created a new interior for the Breadvan, using quilted leather and Alcantara seats, with carbon-fibre backs. The outline of the exterior embossed onto the fabric. That shape also appears in the new dials, all of which get silver (yes, really) inlays, while the dial of the clock reads ‘che importa’; Italian for ‘who cares!’

All of the switchgear has been created in milled aluminium, while — praise the lord — the 550 retains its classic aluminium open-gate manual gearshift (none of that old paddle-shift shite here, thanks very much). The door panels feature an unpainted, hand-beaten aluminium element, which links to the custom body, made in the same way. A small embroidered Italian flag in the corner of the aluminium insert highlights the roots of the vehicle. The door is opened by pulling a lightweight red cord, whilst a blue Alcantara insert functions as a grab handle to close it.

Underneath, the 550’s suspension has been modified with new shock absorbers by Koni, which supplied the shocks for the original Breadvan in 1962. The modern Breadvan Hommage gets high-tech Koni 8211-series units, drawn from the company’s Formula One experience. “The result is a Breadvan Hommage that is relatively comfortable around town, but a true “performer” on the racetrack,” says van Roij.

The Breadvan Hommage also gets unique tyres — Ultrac Vorti+ made for it by Dutch company Vredestein, which has collaborated with ItalDesign Giugiaro to create the car’s rubber. The Breadvan Hommage is the debut vehicle for these new tyres, for which Vredestein claims superior wet & dry braking and extended tyre life.

The Breadvan Hommage will be a strict one-off, built to order. I guess all we need to do now is put the Hommage at the end of a long, long, runway next to an original Ferrari 550, and put Wunibald Kamm’s aerodynamic theories to the acid test. Which would be faster?