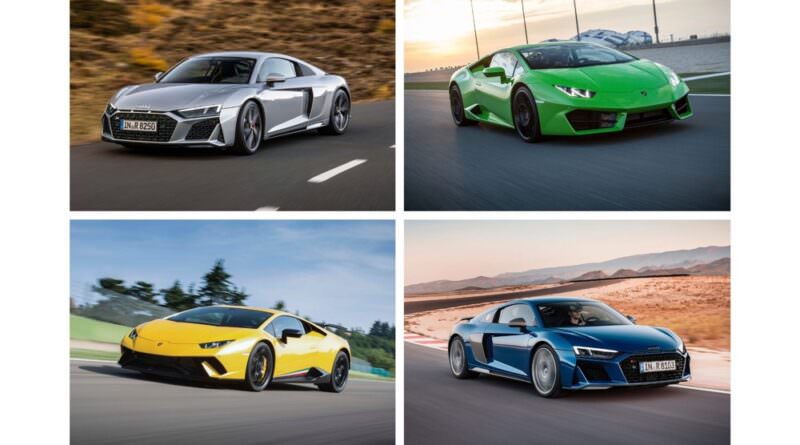 Why would you spend an extra 55 per cent of an Audi R8 Coupe to get yourself in a Lamborghini Huracan Evo RWD?

It’s often posited by automotive reviewers that buyers shouldn’t necessarily ‘spend X amount of extra money on Car Y when Car Z does much the same job for less’. And nowhere is this strange application of nebulous, algebraic maths any odder than in the hyper-rarefied world of supercars. Let’s face it, if you’re going to spend €200,000 on a noisy, mid-engined, showy fast car, you’re going to happily spend €250,000 on one that’s a bit noisier, a bit faster and, er… a bit more mid-engined-ier. Ahem.

Anyway, we’ve been guilty of this trait ourselves. We’ve driven plenty of second-generation Audi R8s over the years and we’ve always come away from our test runs in them thinking ‘why would you want a Lamborghini Huracan when this is so flippin’ fabulous?’. And then, the chance presented itself to have an extended period of time in the Huracan Evo Rear-Wheel Drive (RWD). Which has left us now wondering ‘why would you even contemplate a boring Audi in the face of this thing?!’.

So here, step-by-step, is why we have to go back on our initial word and tell you that, no, it doesn’t matter that you could save a mind-boggling €132,614 if you buy a bog-basic Audi R8 V10 Coupe, instead of the lairy Lambo, because MANY REASONS.

No one is accusing the second-generation Audi R8 of being ugly. In fact, we’ve got to change our old opinion here, too, because we used to think the Mk1 R8 was prettier to behold than the Mk2. But no longer; the original R8s now look a bit buck-toothed and bulbous, where the current generation is sleek and mean. Nevertheless, if you want to stop traffic, get yourself into a Viola Mel Huracan. The scowling face, ultra-edgy lines and general lowness of the Lambo’s shape is enough to bring a grin to the chops of even the hardest-hearted anti-car fanatic, and while plenty of people will cast a glance at the form of the R8 as it burbles by in traffic, the Huracan has star appeal like few other vehicles today can hope to match.

Surprisingly enough, one of the Audi’s biggest failings. Oh, ergonomically speaking and in terms of the general fit and finish, the R8’s cabin is bang on the money. But it’s all ever so sombre. There’s little visual flair inside and once you’re installed behind the Audi’s flat-bottomed wheel, you might as well be sitting in a third-gen TT for all the cabin ambience you’re treated to. Whereas climbing aboard the Huracan is a process which sees your eyes subjected to a full-on assault by hexagons.

The six-sided motif is everywhere you look – the steering wheel’s boss, the speakers in the door cards, the outline of the instrument cluster, the graphics in said instrument cluster, the graphics on the low-mounted infotainment screen, the wacky gearlever, the brilliant flip-up red toggle over the engine start/stop button (a feature that’s supposed to make you think you’re in a fighter jet and releasing the wing-mounted missiles), the air vents… crikey, we have no doubt that Lamborghini would make the windscreen into a hexagon, if it thought it could get away with it without falling foul of crash regulations. Audi’s pragmatic German bods might shake their heads at where some of the items in the Lambo’s cabin have been placed (switches ON the steering wheel for indicators?! NEIN!) but, in short, if you want your supercar’s passenger compartment to have true theatrical flourishes and a sense of wondrous occasion every time you clamber aboard, there really is no competition here. The Italian car monsters the R8 all ends up.

While it is widely known that these two vehicles use broadly the same underpinnings and exactly the same 5.2-litre FSI V10 – which has to go down as one of the all-time great combustion engines ever – the Audi has always been kept that bit behind the Lamborghini, to keep the preordained in-house hierarchy intact. Initially, the R8 had regular 540- and then 610hp ‘plus’ derivatives, whereas the Lambo had an LP580-2 and then the LP610-4. Things further tilted the Italian company’s way once the Performante made an appearance in 2017, but that was a limited-run Huracan. Audi therefore appeared to have the edge when, in 2018, the R8s were uprated to 570- and 620hp, the latter now carrying the Performance epithet.

Lamborghini, though, was having none of that and, in 2019, the LP610-4 gained another 30hp (basically, the Performante’s engine) and the title of Huracan Evo, while even the rear-wheel-drive Italian was boosted up to 610hp. So while the quattro-enabled R8 Performance is hardly what you could call slow, it’s only just a touch more accelerative than the lighter, almost-as-powerful Huracan Evo RWD – despite the latter’s 50 per cent reduction in driven wheels. Incredible.

The Lambo wins this one, hands down. Again, to hear an R8’s mesmeric V10 wailing through its full sonic repertoire is enough to make all the hairs on the back of your neck stand up on end, but then you listen to the outrageous loudness of the Huracan Evo and you wonder how on Earth the Italian outfit managed to get the RWD through noise regs. It’s brutally brilliant on the old eardrums.

Even if we compare the 610hp, newer Huracan Evo RWD to the pre-facelift 540hp R8 RWS, which is comfortably the most engaging R8 we’ve yet driven, the Lamborghini is the more involving steer. It feels more alive and alert at all times, with less of that slightly buttoned-down feel of Audis. This might not seem surprising on the face of it, but for all their brash appearance and ridiculous engines over the years, Lamborghinis haven’t always had the chassis with the requisite talent to match the visual styling. All mouth and no trousers, you might say.

You can’t level that accusation at the Huracan Evo RWD. It might be one of the best mid-engined cars we’ve ever driven, from any manufacturer, with a real feeling that the person behind the wheel is responsible for getting the best out of the underpinnings, rather than everything being utterly dependent on the electronic brain of the car that is sequestered away out of sight. Magnificent stuff from Lamborghini.

You’re expecting us to give this one to Audi, aren’t you? To make things look fair? Well, we’ll at least concede it’s a score draw. But even that is a massive result for the Lamborghini. It’s genuinely remarkably comfortable in its softest Strada setting on the magnetorheological dampers and it even has a nose-lift function to stop you grounding out its pointy conk on speed humps and car-park ramps and so on. So comfort-oriented is the Huracan in Strada that the LDF twin-clutch gearbox will get itself into seventh at the earliest possible opportunity (namely, by 50km/h) and then will resolutely stay there, unless you absolutely slam the throttle down to the floor or click on the exquisite carbon shift paddles (a cost option on our car, admittedly).

It’s so docile, admirably hushed and genial in Strada that you could almost convince yourself you were in an R8. Until you look at all the hexagons again. About the only area the Audi can beat the Lamborghini is on the practicality stakes, but that’s not because one has a markedly bigger boot than the other – it’s simply that you’d probably be slightly more relaxed about leaving the Audi R8 parked in a city while you go for a meal or to check out the latest play at the theatre, than you would be dumping the Huracan at the side of a busy urban road and then leaving it to fend for itself.

A comprehensive rout in favour of the Lamborghini Huracan Evo RWD shouldn’t be viewed in the context of ‘the Audi R8 Performance is a bad car’, because the German supercar is anything but. It is, in fact, chuffing terrific and one of our favourite vehicles yet to issue forth from Der Fatherland. But it’s also blatantly obvious to see that the Lamborghini is, crucially, better in every regard save refinement, and even then it’s staggeringly neck-and-neck with the Teuton. So that’s why a Lamborghini is a whole Porsche Panamera’s-worth more than an R8; plainly, it’s one of the finest supercar experiences of all time. And don’t let any other motoring journalist try to convince you otherwise.