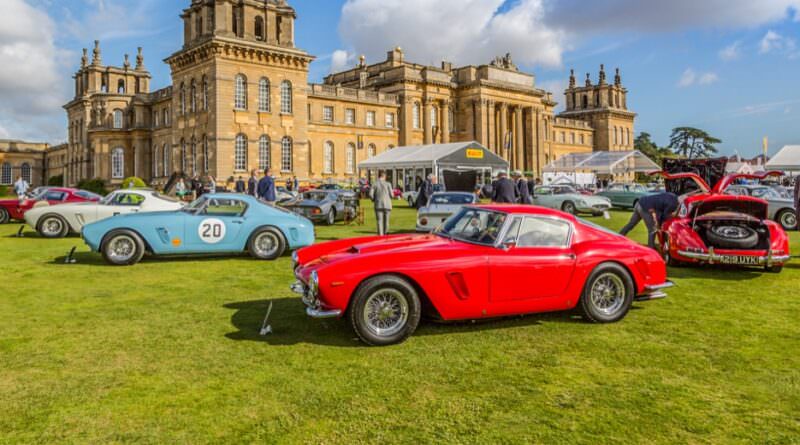 Despite Covid-19, the Salon Prive event packed plenty of excitement in for showgoers.

With the world ravaged in so many ways in 2020 by the Covid-19 outbreak, perhaps fretting about whether or not a top-end concours d’elegance car show would take place was low on people’s priority list. But, under the theme of ‘Coming Together, Keeping Apart’, the annual Salon Prive show in the grounds of the UK’s Blenheim Palace turned out to both the physically largest yet and also a record-breaking event for the organisers.

Begun in 2006 and having moved to its current home of Blenheim in 2015, Salon Prive had to occupy more groundspace on the Duke of Marlborough’s lawns this year to ensure that social distancing could be safely observed. This, coupled with strict Covid-19 security measures, gave a different air to this year’s show, but it remained the only place to be if you want to see a whole array of 1,500 horsepower-plus hypercars on display.

For 2020, a new Media Day was introduced before the main week of the show, giving manufacturers – both familiar and… less familiar – the chance to provide some new-product reveals that had been denied to them by the cancellation of pretty much every conventional motor show going this year, such as the cessation of the Geneva Motor Show in March. Bentley few the flag with a trio of global premieres, courtesy of bespoke and commissioning division Mulliner: the Classic arm showed off the restored 1929 Blower, which was recently taken apart piece by piece and 3D-scanned so that the company can build new components for a series of Continuation models; the Coachbuilt section put the Bacalar on public display for the very first time; and the Collections portfolio completed the hat-trick with its Continental GT Mulliner Coupe.

Over on the Touring Superleggera stand, the Italian carrozzeria unveiled its coachbuilt take on the Ferrari F12 to the crowds, which is called the Aero3. Whether you like the styling, which is vaguely reminiscent of the Alfa Romeo Disco Volante of 2013 by the same Milanese outfit, or whether you think it’s a bit fussy and overwrought (particularly the busy front end) is probably neither here nor there for the well-heeled people who can afford to commission their own Aero3.

Danish hypercar manufacturer Zenvo was also in attendance with the TSR-S, complete with 1,193hp, an extensively carbon-fibre body and that towering rear wing which is active; look it up online and you can see how much it leans, tilts and folds according to how the driver is on or off the throttle, or turning the wheel. One final global debut came from Engler, the company of Slovakian nutcase Victor Engler. The Superquad is basically the guts of an Audi R8 V10 (engine, headlights, rear lamp clusters), only boosted to beyond 1,100hp. Control, such as it is, comes from a set of bike headlamps and the two ‘occupants’ sit exposed to the elements in a motorcycle-like ‘rider and pillion’ arrangement. Given that the Superquad can do more than 350km/h, as it only weighs a mere 1,100kg, you’d have to be a special kind of insane to convince us to ride/drive it. Especially as our eyes still haven’t recovered from simply looking at it.

Maybe not global but certainly European debuts were also handed to the Tour De Force TDF-1 (it’s an old Marussia or Sauber F1 chassis from 2012, only given a four-cylinder engine to make it easier to maintain and therefore the only real way of privately owning a modern-day F1 machine), the all-electric Aspark Owl hypercar (2,012hp and 2,000Nm, 0-100km/h in 1.9 sick-inducing seconds) and the Personal Air Land Vehicle (the PAL-V and yes, it’s a flying car). Swedish loons Koenigsegg brought along the Gemera four-seat ‘mega-GT’, which has a mid-bending drivetrain spec of a 2.0-litre, three-cylinder turbocharged engine with three electric motors for 1,724hp in total, while the Bugatti Chiron Super Sport 300+ prototype made its debut in the UK after it attained a production-car speed record of 490.484km/h. Perhaps more in the real world, and it’s not often you say this about a vehicle from this particular marque, but Rolls-Royce showed off the latest Ghost to the public, a car which our man Neil has already driven.

Our favourite vehicle of the show, though, was not one making a world or even European debut in public. It was the Lotus Evija, the 2,000hp all-electric, 4×4 hypercar from the sports car manufacturer. In searing yellow paint and with its stunningly pared back interior (the Evija weighs around 1,600kg, which might look abominably heavy for a Lotus but which is astonishingly light for something so powerful that’s also an EV) on show, this car looks every inch the €1.8 million bombshell that its parent manufacturer wants it to be. We have strong levels of ‘want’ for the ‘Ev-eye-ah’ (proper pronunciation).

After all the debuts and showmanship from the new vehicles, the Concours d’Elegance of Salon Prive took over, as wonderful old motorsport and road-going classics and rarities fell under the public eye, as the crowds flocked in throughout the week – the coronavirus crisis not putting off those who wanted a high-class day in the sunshine (NB: this was the UK in September, so ‘sunshine’ is rare at the best of times anyway). Heartening that, amidst all of the 2MW lunacy of the modern EV hypercar power race, the Duke of Marlborough Award went to a 1987 Lotus Esprit Turbo HC, while the Owners’ Choice – selected by all the people who had brought their wonderful and oh-so-expensive classics to the event – was given to a 1979 BMW M1 with Procar-style bodywork that was once owned by Franz Farian, the bloke from 1970s disco supergroup Boney M. Excellent.