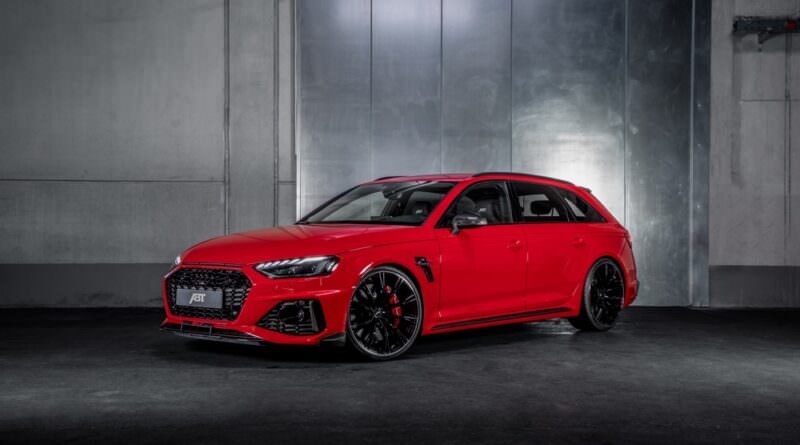 510hp and aero package for mega-estate

You might know German tuning and racing firm ABT best for the fact that it runs the Audi Formula-E electric racing team (which is overseen by Le Mans and F1 legend Alan McNish). However, while a Formula-E car whizzes along on around 340hp of silent electric power, ABT has some rather more invigorating powertrains in its back pocket…

ABT is essentially Audi’s official-unofficial tuning and tweaking arm, and while it’s waving the eco-friendliness of Formula-E at us with one hand, with its other it’s spannering Audi’s RS4 estate and making it rather more RS-y.

If you’ve read our review of the current RS4 over at our sister site, CompleteCar.ie then you’ll know that the hot Audi wagon is one of the more subtle performance cars out there right now. Fast, certainly, and with a brilliant chassis, but with rather less power than its BMW or, especially, Mercedes-badged rivals. More intent on being a brilliant all-rounder (which it surely is) than on blowing straightline-speed records out of the park.

Well, ABT’s mission is to take all of that an un-subtle it. The ABT RS4-S takes the standard RS4 and gives it the full Frankenstein treatment.

Up front, that brilliant 2.9-litre twin-turbo V6 engine has been put on a crash diet of creatine powder and Japaleno chillies. We assume. That’s enough to boost peak power from a standard 450hp (which, we’ve got to be honest, didn’t feel to shabby in the regular RS4) to a far more muscular 510hp. Torque jumps from 600Nm to 660Nm at the same time. ABT manages to do this by both switching out the standard Audi engine black-box control unit for one of its own concoction, and by changing the air-intake cover for a little more easy-breathing.

If you’re thinking “Well, 510hp is good. Pretty good. I mean, I guess. Fine, I suppose. But I’d like more…” then ABT is here to satisfy your Oliver-like request. More?!?!? The boy asked for more!??! Well, you can have more — tick the box for the ABT Power S kit and you’ll find that 530hp can be squeezed from that V6 engine, with 680Nm of torque. The top speed also increases to a robust 300km/h.

“The Audi RS4 has been an icon since the first generation in 1999,” explains Managing Director Hans-Jürgen Abt: “We have added some exciting new features to this high-calibre performer, and now it has even more fire.” Boy, howdy…

Meaner styling gives the ABT RS4-S an aggressive look

The RS4’s rather subtle body-kit has also been worked over for a look that’s far more aggressive. In fact, the RS4-S gets a full ABT Aerokit, which consists of a front lip spoiler, with RS4-S stencilled across it; front wing blades; wheel-arch vents; a rear spoiler (made from carbon-fibre); and a rear skirt insert. There’s also an ABT stainless-steel exhaust, for maximum rumble, with four 10mm carbon-fibre end-pipes, and 21-inch ABT Sport GR alloy wheels, finished in glossy black.

It’s not just power and styling that ABT works on — the RS4’s chassis has been tweaked, too. You get ABT height adjustable suspension springs as well as ABT anti-roll bars on the front and rear axles. Pay a little (actually quite a lot) extra and ABT will even fir racing-style coil-over shocks.

Inside, you get ABT and RS4-S logos everywhere, and for an additional fee, you can have the whole cabin dipped in a vat of carbon-fibre and allowed to dry (yes, we know that’s not how carbon-fibre works…).