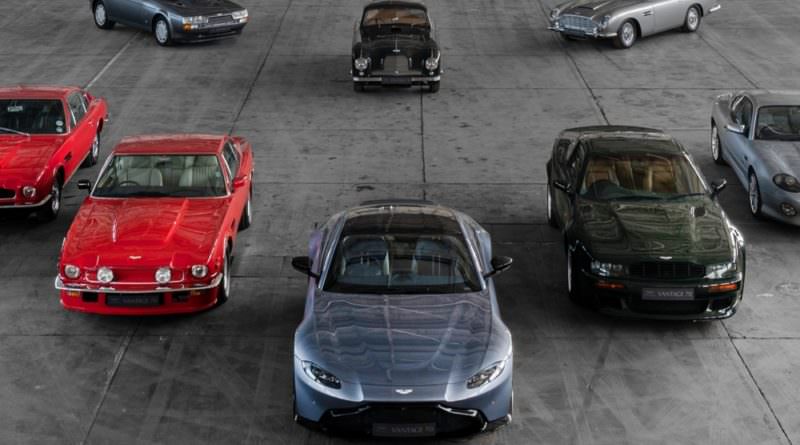 2020 marks 70 years since the first Aston Martin Vantage model appeared, and since then it has gone on to represent some of the company’s most desirable models.

Over 36,000 cars have been produced wearing the Vantage name, each meticulously handcrafted. Aston Martin Lagonda President and Group CEO, Dr Andy Palmer said: “Today’s Vantage and Vantage AMR sports cars represent the latest interpretation of what this single, yet incredibly evocative, word means to drivers around the world. As we celebrate 70 years of Vantage in 2020, it allows us to delight in our superb sports car heritage. Vantage has always stood for engineering ambition, thrilling performance and exceptional beauty, and I’m pleased that today’s models more than live up to the standards set by their iconic forebears.”

To celebrate this significant anniversary, we’ve taken a look back at the history of the Vantage name and the models it has featured on.

The first time that the Vantage name appeared was on a 1950 Aston Martin DB2. It represented a car that was equipped with an uprated motor, in this case, a 2.6-litre Lagonda engine that was fitted with larger SU HV6 carburettors and a higher compression ratio of 8.16:1. These improvements resulted in a 20hp increase to 126hp at 5,000rpm.

In all, 248 examples were produced across both saloons and drophead coupes in the factory at Feltham, Middlesex. Among the team of engineers that worked on the development of the Vantage programme was Robert Eberan von Eberhost, formerly of the Auto Union team, who subsequently went on to design the Aston Martin DB3 and DB3S.

Linking to the company’s success at Le Mans, at the 1951 Earl’s Court Motor Exhibition, an Aston Martin press release stated: “On the 1951 Earl’s Court stand will be displayed two Aston Martin DB.II saloons, one fitted with the regular engine and one fitted with the ‘Vantage’ engine, the high speed regularity of which was demonstrated so forcibly at Le Mans this year and last.”

It was 1961 when the Aston Martin DB4 Vantage came onto the scene alongside the DB4 Series IV cars, and it was visually different from the standard models. Faired-in headlights from the DB4 GT and bright aluminium trim set it apart aesthetically.

Under the bonnet, the DB4 Vantage got the ‘Special Series’ engine that had three SU HD8 carburettors along with revised cylinder heads that included larger valves and a higher compression ratio but used the same 3.7-litre aluminium engine block as the standard car. Power rose from 243hp to 270hp.

The following year Aston Martin introduced a roomier DB4 Series V Vantage, which was the last in the DB4 series. This car is the model that features in the James Bond film Goldfinger.

Almost identical to the DB5, the DB4 Series V Vantage was essentially a prototype DB5. It is believed that 135 DB4 Vantages were produced with the rarest being the DB4 Vantage with the optional DB4 GT engine, of which only six were made.

Following the evolution of the DB4 Series, the Aston Martin DB5 Vantage continued the theme, though it wasn’t a huge success. The Vantage car was equipped with a version of the 4.0-litre engine that had triple Weber carbs to give it a total of 330hp. Yet of the entire DB5 production run of 887 cars, only 68 were Vantage models.

Aston also made a DB5 Convertible, and this car is rarer again, with only eight examples of the 123 built being Vantage versions. Subsequently, many owners have upgraded DB5 Convertibles to Vantage specification. When new, buying the Vantage upgrade cost £158, plus tax in addition to the regular retail price, which was £4,439 15 schillings and fivepence in 1965.

The Aston Martin DB6 Vantage made use of the same 4.0-litre straight six-cylinder engine as the DB5 and even had the same power output. Like the DB5, this car now carried the Vantage badge on the side strakes of the car. There were two versions, a Mk I and Mk II, with only minor differences.

Production numbers for the DB6 Vantage were also low with 335 saloons and 29 Volante Mk I models and 70 saloons and 13 Volante Mk II models made. Incidentally, the saloon is what Aston Martin referred to as its coupe (hardtop) models at the time.

With the arrival of the Aston Martin Vantage in 1967 came a different look thanks to the design work of William Towns. He penned the more angular shape that gave the car a modern look. It was due to get a new V8.

However this engine was not available in time for the car’s launch, so it debuted with the same 3,955cc six-cylinder Tadek Marek engine and was available in Standard of Vantage trim. In an attempt to offset the extra weight, the Vantage engine used different camshafts to increase performance.

For 1972 the Aston Martin DBS received some revisions, most easily identifiable by the move from four to two headlights. The name also changed to the AM Vantage.

In all only 70 examples were produced and unlike previous models that bore the Vantage name, this car was, at the time, the least powerful model in the Aston Martin range, further limiting its appeal.

The game changed in 1977 with the arrival of the Aston Martin V8 Vantage. Dubbed as ‘Britain’s first supercar’, it would go up against models like the Ferrari 512BB, Lamborghini Countach and Porsche 911 Turbo. Its top speed was 273km/h, and on the sprint to 100km/h it would outpace a Ferrari Daytona.

The engine was based on what also appeared in the Lagonda saloon, but gained an increase in compression ratio, high-performance camshafts, larger inlet valves and bigger carbs that were mounted on new manifolds for better output. Aston used stiffer springs, a larger front anti-roll bar and Koni dampers to improve handling.

It was easily recognisable by its front air dam, two Cibie H4 driving lights in the grille that was blanked off as cooling for the radiator was drawn in beneath the bumper. The sealed bulge on the bonnet covered the larger airbox that sat over the down draught carbs. A spoiler on the boot lid served to reduce lift at higher speeds.

The Aston Martin V8 Vantage had a very long life, spanning three decades in total but in all 372 saloons and 194 Vantage Volantes were made. Over the years the car did evolve slightly, and production came to an end in 1990 with the final deliveries of what was called the ‘X-Pack’ car with a 5.3-litre engine.

One of the rarer models was the V8 Vantage Zagato. A total of 52 coupes and only 8 Vantage Volantes were made, making the latter a very rare and much-sought-after car.

The 1990s ushered in the era of supercharging with the debut of the Vantage based on the Virage. It was powered by a 5,340cc V8 that was fitted with two Eaton superchargers resulting in a power output of 558hp and 745Nm of torque, making it the most potent production engine on sale at the time.

It didn’t stop there, due to its 1,990kg weight, the car was also fitted with 362mm diameter ventilated discs and four-piston AP Racing callipers that there the largest front brakes fitted to a road car that that time. There were a few versions over the years including the V550, V600 and V8 Vantage Le Mans, with production lasting until October 2000. That V600 version saw more power added, resulting in a top speed of 299km/h.

Just before the new Millenium, Aston Martin debuted the Db7 V12 Vantage. It was part of a restyle by Ian Callum and under its bonnet lay a 5.9-litre 48 valve all-alloy V12 that produced 426hp and 542Nm. The engine was part of a co-development project involving Cosworth Technology and Ford Research and Vehicle Technology Group.

Along with that engine, the chassis came in for some upgrades including new suspension all-round. It was a fast car, too, with a top speed of 296km/h and a 0-100km/h time of 5.0 seconds. The automatic transmission model saw its top speed limited to 265km/h. It was a successful car, with Aston Martin producing 2,091 units during its four and a half year run.

Following the AMV8 Vantage Concept in 2003, the production version of the latest V8 Vantage arrived in 2005 and demand from day one was huge. Aston Martin worked flat out, making almost 3,000 cars per year and to date, this model remains the most successful in the company’s history.

It was the second model to be made on the VH architecture that first underpinned the DB9, but the first to use the new 4.3-litre quad-cam 32-valve dry-sumped V8. The engine was built alongside the V12 as the company’s engine plant in Cologne, Germany.

With the V8 Vantage enjoying considerable success, in 2009 Aston Martin shoehorned a V12 into the car to create the V12 Vantage. It weighed only 50kg more than the V8 Vantage thanks to its all-aluminium alloy V12 that also appeared in the DBS. The 5,935cc power unit had quad overhead camshafts with four valves per cylinder and produced 517hp at 6,500rpm with a total torque output of 496Nm. It has a six-speed manual transmission and could reach a top speed of 305km/h.

Upping the ante further, in 2013 the V12 Vantage S arrived with an increase in power to 573hp and 620Nm, resulting in a 0-100km/h sprint taking just 3.5 seconds thanks to the Sportshift III automated manual transmission. Its 330km/h top speed made it the fastest Aston Martin to date, and subsequently, there was a seven-speed manual version offered.

The V12 Vantage model featured several special editions, but the most sought-after was the V12 Vantage Zagato that made its debut in 2012. Aston Martin has a long history of working with the Italian design firm and this version incorporated many of the company’s classic design signatures. A total of 150 were planned for production, but it is believed that in the end only 61 cars were made.