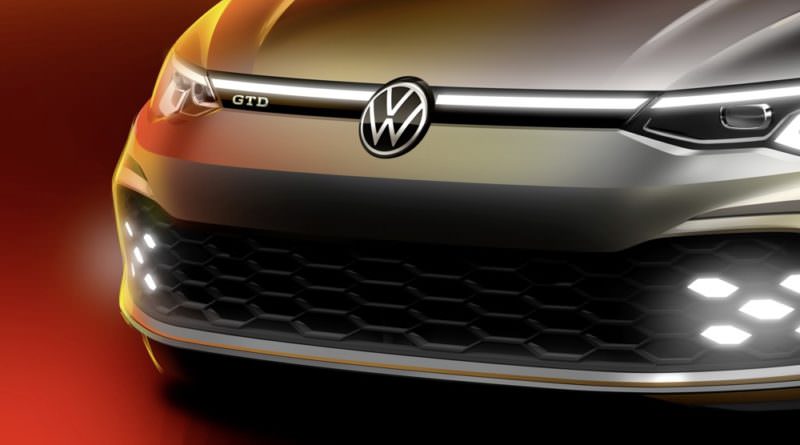 The Volkswagen Golf GTD will get one more outing as part of the eighth-generation Golf range.

Fans of performance diesels will be relieved to know that the Volkswagen Golf GTD will make its public debut at the 2020 Geneva motor show in March. Despite legislators introducing increasingly tighter emissions regulations, the boffins in Wolfsburg have done enough to give the Golf GTD at least one more outing, offering a diesel-powered alternative to the sporty Golf GTI.

Details remain scant for now, and thus far Volkswagen has only released one portion of a design render showing the Golf GTD wearing a sporty bumper that features LED fog lights that are more than a little bit similar to those found on the front of a Renault Megane RS. It also carries a light bar running across the front, similar to that featured across the nose of the electric Volkswagen ID.3.

We’ll have to wait until the car makes its official debut for performance figures, though it is likely to retain the turbocharged four-cylinder diesel engine in a TDI Evo guise. That will include new internals and a more advanced exhaust treatment system that uses a twin dosing SCR for a double helping of AdBlue to reduce the NOx emissions even further. Volkswagen says that the new Golf GTD will be “one of the cleanest combustion engines in the world”.

With the ID.3 coming along, as well as several other ID electric models, there is some uncertainty over the long-term future of the Golf. For this current eight-generation at least, it Volkswagen will offer one of the broadest product offerings. It has already introduced the standard diesel and petrol versions, including mild-hybrid models with the eTSI name. A plug-in hybrid GTE model will also soon be added and joining the sporty Golf GTD there will be a petrol-powered GTI. Rumoured to follow will be a more track-focused Golf GTI TCR and then a range-topping Golf R.