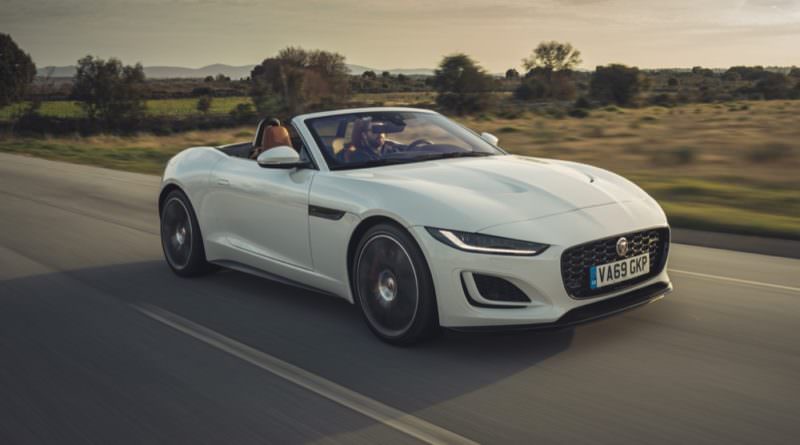 The MY21 Jaguar F-Type gets a very different look thanks to a total redesign of the front-end.

Everything ahead of the windscreen line has changed with the nose appearing to be lower thanks to those very sleek headlights. The signature Jaguar grille has been enlarged a little and that gorgeous bonnet, itself an exercise in aluminium stamping, tastefully incorporates a pair of vents. Despite looking so different, the overall dimensions remain the same, but it’s that style which could well win over a glut of new buyers.

Design changes to the rear are more subtle, with Jaguar adding slimmer rear lights that carry the same ‘chicane’ signature as the electric Jaguar I-Pace. Models with the V8 get quad exhausts while the P300 2.0-litre turbocharged four-cylinder engine makes do with a central exhaust system. Jaguar will continue to offer the V6 engine in some international markets. You can still choose from coupe or convertible body styles across the range.

Unlock the car and those flush door handles pop out to grant you access to what is still a cosy cabin. There’s room for two and not much else. The F-Type MY21 gets several tech upgrades, including a 12.3-inch digital instrument cluster. Drivers can configure this to display a variety of screens ranging from a full map mode to a more driver-focussed central rev counter that includes a shift light function when the dynamic mode is engaged. A newer 10-inch touchscreen infotainment system consists of an embedded version of Spotify along with Android Auto and Apple CarPlay.

There are two versions of the 5.0-litre V8 in the MY21 F-Type range. Both are supercharged with the range-topping variant, the F-Type R, getting 575hp and 700Nm power output, which it delivers through an all-wheel-drive transmission. The P450 we’re driving here gets 450hp and 580Nm of torque, but you can have the choice of all-wheel drive or, in this case, a rear-wheel-drive setup. All versions use an eight-speed automatic gearbox.

Having driven both back to back, along with the less potent P300, it quickly becomes clear that the P450 resides in the Goldilocks zone of the F-Type range. The hard edge of the F-Type R’s engine is softened, and there is ample performance leaving the V8 unstressed resulting in a smooth and refined drive. Indeed, the active exhaust does fully open until you extend the digital tachometer beyond 3,500rpm. The revised exhaust system also opens those valves in a more gradual fashion making it less on-off when it begins to bellow.

And bellow it does, especially with the drive mode toggled in the Dynamic direction. The V8 winds on power relentlessly and delivers it in a huge surge of torque that shoves you along. With the transmission switched to manual model, you can’t help but wring the engine out all the way merely to savour the crack from the four tailpipes as you pull on the cold metal paddle shifter to slot in the next gear. In the convertible with the roof down it’s a wonderful experience, and little else this side of a proper AMG sounds as good. The only downside to the convertible on an everyday basis is the increased wind noise within the cabin when the roof is up – the coupe seems to have a good deal less. Positively though, even with the roof down, there is little in the way of wind buffeting until you begin approaching fast motorway speeds.

The steering has a nice feel to it across the different drive modes, and the nose of the car in this rear-wheel-drive setup does feel ever-so-slightly lighter. When it comes to winding and undulating roads, the F-Type offers a sharp and engaging drive. That crisp handling and 380mm brakes make it easy to devour corners and exiting them is as rewarding aurally as it is physically. Herein lies the joy of the F-Type P450. As good as it is at satisfying the demands of enthusiastic drivers, it easily slips back into a semi-GT state. The engine settles down, exhausts partially close off, and it becomes this comfortable cruiser that has still has sufficient legs to dispatch great distances with ease. If there is one F-type to have, the P450 is it.