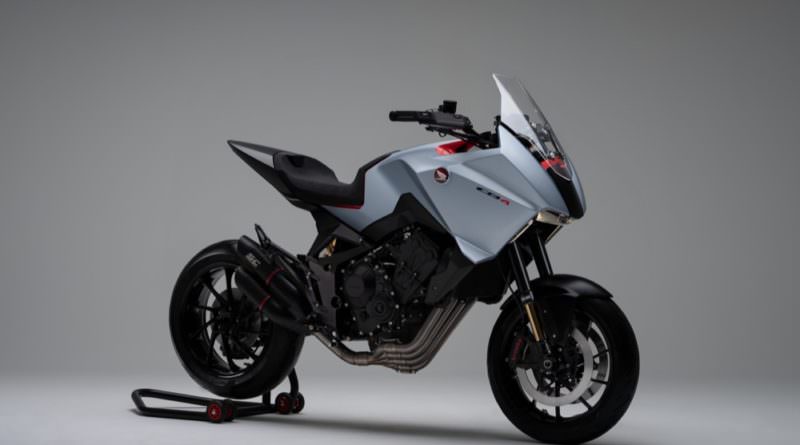 One of the more exciting bikes to debut at on the Honda stand at EICMA 2019 was the CB4X concept. Blending elements from sports and touring bikes, and adding a dash of a crossover like the larger CB750X, this middleweight sports adventure bike has been created for riders that do the everyday urban commute but still want to have some fun in the twisties at the weekend.

A dramatic side profile shows the multipurpose nature of the concept that in many ways resembles a jacked-up sports bike. The short and upward pointing aluminium subframe and tail section don’t appear to be the most pillion-friendly either. A single-sided swingarm hints at a more road-bias, as do the wheels that are shod in sticky Pirelli rubber.

Its setup also easily adaptable and included an adjustable screen that integrates into the front fairing. According to the design team, that fairing is shaped to resemble a cobra preparing to attack its prey. Emphasising the futuristic look are LED daytime running lights stacked vertically on either side of the inner front fairing and the main headlight that is centrally set like a diamond.

Powering the Honda CB4X Concept is a traditional in-line 650cc four-cylinder engine. Its four individual header pipes wrap under the engine and into a single pipe before splitting into the stacked dual-tip SC Project exhaust. The CBX4 concept rides on Öhlins front and rear suspension along with Brembo brakes. A 17-inch front wheel aids sharper steering and with the raised and wide handlebars should make for a fun and easily manoeuvrable ride.

Overseeing the design of the CB4X was Valerio Aiello, and it was completed by a team of young designers that were encouraged to push the existing boundaries. Its theme was ‘fun seven days a week’ and judging by the finished product we think they’ve done a great job in meeting the design brief.

Here are some more images of the striking concept