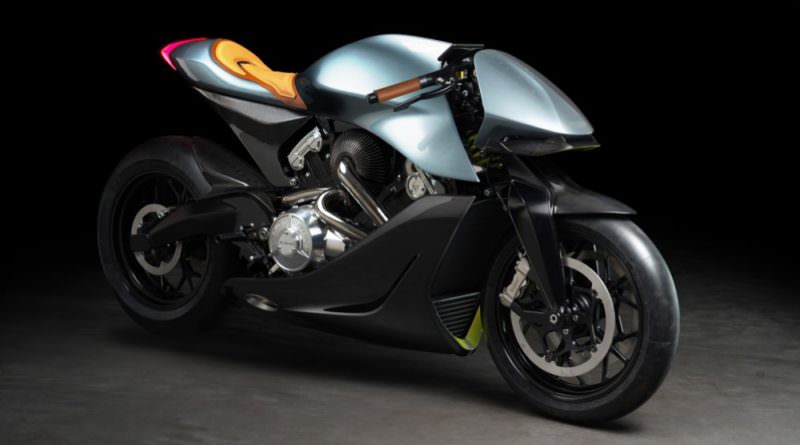 The AMB 001 is the first product resulting from a partnership between Aston Martin and Brough Superior. It’s a track-only machine that will see only 100 units produced and is as much about being motorcycle art as it is about performance.

Its radical appearance doesn’t provide much protection for the rider as they lie over the sleek bodywork. A small digital instrument display provides all the necessary information. Drawing inspiration from the side strake on Aston Martin cars, a carbon fibre fin runs along the centre of the tank stretching back from the instrument display and disappearing underneath the seat, which is made from Oxford Tan leather, before reappearing and exiting the rear of the bike. The attention to detail on the AMB 001 is exceptional. Its fuel tank carries the same stainless steel Aston Martin wings from the Valkyrie that is just nine microns thick to be as light as possible.

Powering the ASB 001 is a 997cc 88º V-twin. The engine gains a power boost to 180hp thanks to the fitment of a turbocharger – the first time that a Brough Superior V-twin has shown with one. It’s a variable geometry turbocharger enabling for low inertia to help reduce lag and broaden the powerband. Its exhaust manifold is made from Inconel, chosen for its lightness and thermal properties, and exits through a flush fitting with the single-piece carbon fibre bellypan.

A double wishbone Fior fork arrangement at the front provides a Hossack-style effect that isolates the steering from any braking forces and eliminates dive. The use of forged aluminium wheels helps to reduce rotating mass and feature a bespoke design exclusive to the AMB 001. The rear swingarm is CNC machined and uses a progressive damper system with a rocker. All of the body parts are made from carbon fibre, helping to contribute to an overall dry weight of 180kg.

Aston Martin Executive Vice President and Chief Creative Officer, Marek Reichman said: “This is what we believe a cutting-edge motorcycle should be and we are very proud to see the Aston Martin wings on a motorcycle for the first time. In addition to applying the skills we have developed for cars such as the ground breaking Aston Martin Valkyrie, we have also been able to bring our special expertise in the traditional craft techniques to this project. The finished product is a truly beautiful motorcycle; a design and engineering work of art.”

The AMB 001 will be assembled by hand in the Brough Superior factory located in Toulouse, France during 2020, with the first customer deliveries due to begin in Q4. With only 100 examples set for production, the AMB 001 will be a rare thing, even more so by its €108,000 price tag. It’s a pity that we’re unlikely to see one on the road.