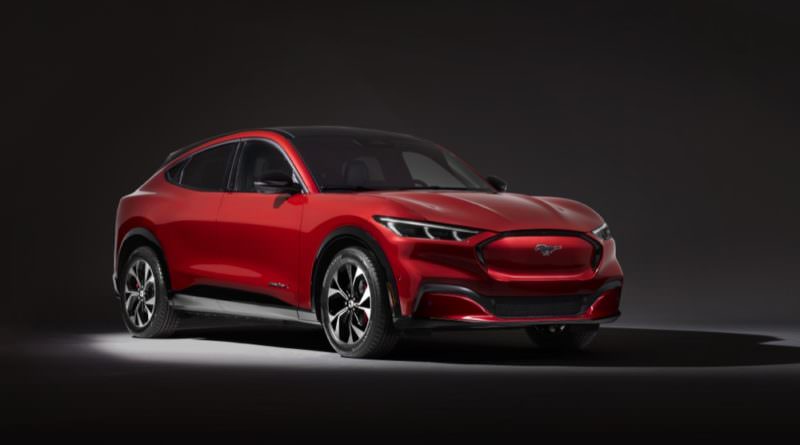 After what seems like months of teasing the fully-electric Ford Mustang Mach-E has made its official debut.

It’s Ford’s first proper electric vehicle and will comes with the choice of two battery packs and rear- or all-wheel drive. The five-seat SUV will face stiff competition from a raft of new electric vehicles like the yet-to-be-released Tesla Model Y, Kia e-Niro and even more premium models like the forthcoming Audi e-tron Sportback.

Taking a leaf (obvious EV-related joke) out of the Tesla playbook, Ford has begun taking $500 deposits in the hope of banking a considerable number of orders ahead of scheduled production.

The Ford Mustang Mach-E is built on a new electric vehicle platform the company calls Global Electric 2 (GE2), that uses some of the same architecture as the latest Kuga and Focus models, but isn’t part of the Volkswagen Group’s MEB platform that Ford has agreed to use for future electric models.

Buyers will have the choice of two battery packs with the Mustang Mach-E. The first is a 75.7kWh lithium-ion unit, followed by a larger 98.8kWh battery pack that should be capable of Ford’s targeted driving range of up to 600 kilometres in rear-wheel-drive configuration. For now, Ford hasn’t said what sort of range the smaller battery pack will offer.

The 75.7kWh unit is made up of 288 lithium-ion cells, while the 98.8kWh pack uses 376 cells. Ford has tested these in both crash scenarios and extreme temperature situations. An active liquid heating and cooling system helps to regulate the battery temperature to maximise charging time.

It will be possible to charge the Mustang Mach-E at up to 150kW where possible. At this rate the Ford can add 93 kilometres of range in 10 minutes. With a standard DC fast-charging station, Ford says owners can expect to charge from 10 per cent to 80 per cent in around 38 minutes.

Either battery pack will be available with either rear- or all-wheel drive transmissions, using permanent magnet motors. The 98.8kWh battery with all-wheel drive will produce 337hp and 565Nm. A higher-performance Mustang Mach-E GT is said to have a 0-100km/h acceleration time of less than five seconds, thanks to an increase in power output to 465hp and 830Nm.

Just as radical as the exterior, the cabin of the Mustang Mach-E is totally new. At the centre of the dashboard is a huge Tesla-like 15.5-inch touchscreen display running the latest SYNC infotainment system. Ford says this has double the computing power of SYNC 3 and allows for typical smartphone controls like swipe and pinch to navigate certain tasks. Wireless compatibility with Android Auto, Apple CarPlay and AppLink means that almost all devices will be work with it.

On the practical side, the Mustang Mach-E gets a 402-litre boot in the rear, and this space is capable of increasing to 1,420 litres when the rear seats are folded. Additionally, there is a smaller 100-litre boot in the front, which will be useful for storing charging cables and smaller items.

Here’s an image gallery of the new Ford Mustang Mach-E.