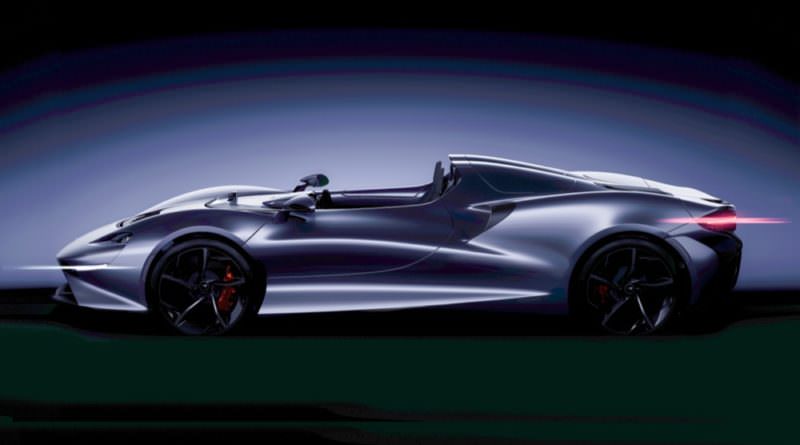 This McLaren roadster is the latest Ultimate Series car, which the company claims will offer the purist driving experience yet. A bold claim from the company that created the F1.

Its name isn’t yet known, but McLaren has said that it will slot in between the Senna and Speedtail. The open-top roadster features two seats but no windscreen, similar to the Ferrari Monza SP2, and is set to be the lightest car that the company has ever made.

Along with the lack of a windscreen, the car will feature up-swinging dihedral doors, and its entire body and chassis are likely to be produced in carbon fibre.

Just one sketchy design render of the McLaren roadster has been officially released so far, and some quick adjustments in Lightroom reveal a clearer look at the new roadster. Among the details is a small windscreen lip around the front of the cockpit, designed to help flick some of the airflow over the occupant’s heads.

Behind them are two individual roll loops integrated into the bodywork that then flows back down over the engine cover. There’s even a small rearview mirror placed behind the small aero screen that we imagine shows just enough of what’s going on behind in between the roll hoops. Though why this isn’t on a tall stack like a Lola T-160, we don’t know.

Like the McLaren 600LT, the exhausts appear to exit from the top of the engine cover, rather than the rear. Similarly, the car looks to have the ultra-thin carbon-backed seats too.

Air is fed into the engine through two intakes on the rear haunches of the car, and the roadster would seem to have the same active aero rear wing as the 720S. Additional intakes stretch across the front, between the unique headlight design that mimics the Mclaren Automotive logo

The car has been shown to prospective buyers during a presentation at the Pebble Beach Concours in Monterey. McLaren has confirmed that the production run will be limited to 399 examples. Its engine will be a version of the twin-turbocharged V8 that features in the McLaren Senna.

Company CEO, Mike Flewitt, said: “At McLaren Automotive we are consistently pushing the boundaries to deliver the purest and most engaging driving experience whether for the road or track. Our two current ultimate series cars, the Senna and Speedtail, offer unique and distinct driving experiences. Now this new addition to the Ultimate Series, an open-cockpit roadster, will take road-focused driving pleasure to new levels.”

No official pricing has been announced, but Mclaren has indicated that the car will cost somewhere between the £750,000 Senna and £2.1 million Speedtail. We expect it to cost at least £1.2 million, and that’s before you start to factor in the likely special features the company will upsell through its MSO division. After all, who wants just a standard car.