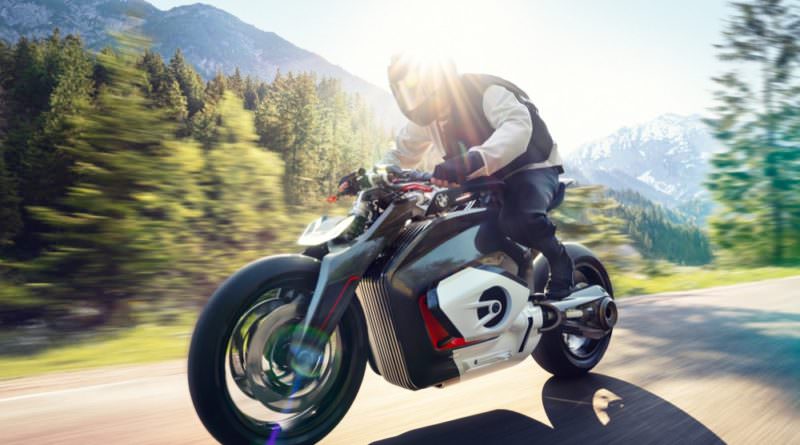 The BMW Vision DC Roadster is a new design concept that showcases just how the brand’s electric bikes of the future could look.

The good news for die-hard BMW fans that means the Boxer engine will live on. Sort of.

This pretty aggressive looking concept is little more than a battery with a wheel attached at either end. It’s a longitudinal unit that sits vertically in a milled aluminium frame and has a three-dimensional surface cover.

Where it gets interesting is how BMW envisions how it will cool the battery unit. Cooling systems sit on either side and mimic the look of the iconic Boxer engine. When the bike starts, these slide outwards and appear similar to how the cylinders and cooling fins of the combustion engine would sit in the airflow. When fully extended you can see some more of that red detailing behind them.

With the battery accounting for a big part of the DC Roadster’s weight, BMW made extensive use of aluminium and carbon fibre in its construction. Up front, there is a new variation on the Hossack fork design that has been a feature on other production models like the K1300 R.

A thin U-shaped LED headlight sits just above the front tyre and appears to float in front of the fork. The cooling fin design runs through its centre, mimicking that of the main battery unit. A similar light design can be seen at the rear with two smaller C-shaped red LED units forming the end of the single-piece subframe that runs along the top of the bike.

This minimalist design leaves the carbon support struts on view as they straddle the rear shock unit. The linkage arrangement of the single-sided swingarm is a thing of engineering beauty. The centre section is left open so that we can see the shaft drive running to the rear wheel.

That top subframe structure follows the shape of what would be a traditional fuel tank and is braced in the centre with an X-shape of carbon tubes. The rider can look down directly onto the machined cooling fin design that encases the battery unit. The convenience of the damper adjustment for the rear shock sitting just ahead of the rider’s crotch is debatable.

A small digital display sits within the headstock of the bike and shows the minimal amount of information for the rider. The handlebars are just as simple yet are dripping in design detail when you look closely. Even the reservoirs for the brakes and we assume clutch are beautifully crafted and a visual treat.

Metzler made some special tyres for the Vision DC Roadster, featuring five fluorescent elements on each of the sidewalls. Not only do they look cool, at night they add another element of motion to the bike as it moves. It’s not quite a Tron Lightcycle, but we dig it.

When BMW Motorrad makes a new concept bike it usually follows up with some matching rider equipment. In this case, it’s super modern and as much catwalk fashion as functional protective riding gear. The body armour is almost seamless in how it is integrated, and there are iridescent colours that contrast against black pants.

One other neat feature is a specially designed asymmetrical rucksack vest. It fixes onto the jacket magnetically and has a useful amount of storage.

For now, this remains purely a design concept for BMW to muse about how its bikes might look in the future. It would be a novel way for BMW to retain that Boxer engine shape that was created by Max Friz back in 1923, and BMW isn’t keen to let go of a feature so unique to its heritage.

“The boxer engine is the heart of BMW Motorrad – an absolute stalwart of its character. But BMW Motorrad stands for visionary zero-emissions vehicle concepts, too. In view of this, one question that arises is: what would happen if we were to replace the boxer engine with an electric motor and the required battery? The Vision bike shows how we’re able to retain the identity and iconic appearance of BMW Motorrad in distinctive form while at the same time presenting an exciting new type of riding pleasure,” explains Edgar Heinrich, Head of Design BMW Motorrad.

“After all: anyone who’s ever tried it out in practice knows very well that riding on two wheels is just as exciting when it’s electrically powered! The high level of torque right at set-off makes for breathtaking acceleration. This almost brutal power delivery creates a whole new experience of dynamic performance. And the BMW Motorrad Vision DC Roadster puts a face to this experience.”