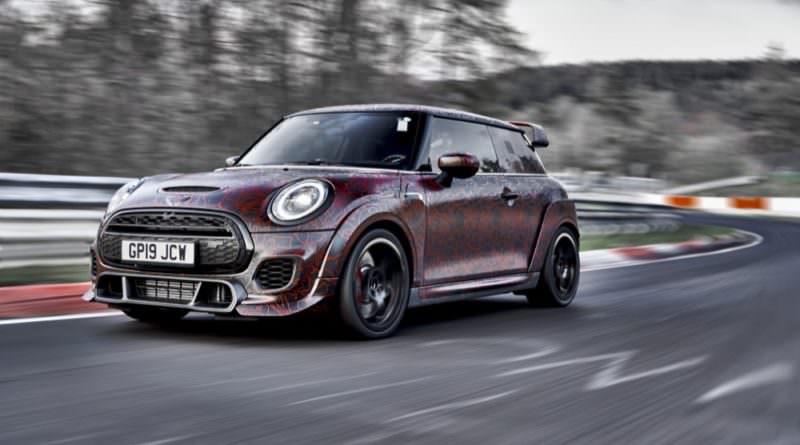 All-new third-get MINI GP will arrive in 2020 with more than 300hp and aggressive styling.

As the 2020 MINI GP continues its development, new photos from BMW give us our best look yet at the brand’s new hot hatch. The third-generation MINI John Cooper Works GP will be the most powerful to date, with more than 300hp on tap.

The car is currently in the final stages of development, and the latest images show it pounding around the Nürburgring-Nordschelife. Even with some light camouflage still in place, we can already see the aggressive bodywork that was previewed on the 2017 MINI John Cooper Works GP concept. Flared wheel arch extensions appear to channel air between them and the bodywork, though it’s not quite clear as to how much downforce, if any, these produce.

Judging by the size of the roof-mounted rear spoiler, the new MINI GP shouldn’t be lacking in rear grip. While we haven’t seen the interior of the car yet, it is expected to stick to the same two-seater configuration that was a feature of the previous two versions. It also justifies the need for that larger rear wing.

We don’t yet have performance figures for the MINI GP, but it should be close to what’s on offer from the BMW X2 M35i. Both cars share many of the same mechanical underpinnings, which should include the turbocharged 2.0-litre petrol engine. In the hot X2 that makes 306hp and a useful 450Nm of torque. Considering that the MINI GP will likely weigh in less than the X2’s 1,685kg means it should beat the 4.9 seconds it takes the X2 M35i to crank the 100km/h barrier.

MINI is expecting demand to be high, and unlike the first two MINI GP models, which were limited to 2,000 units each, this GP3 will see production remain limited but is set to increase to 3,000 units globally.

Check out more of the new MINI John Cooper Works GP undergoing its final testing phases in our gallery below.