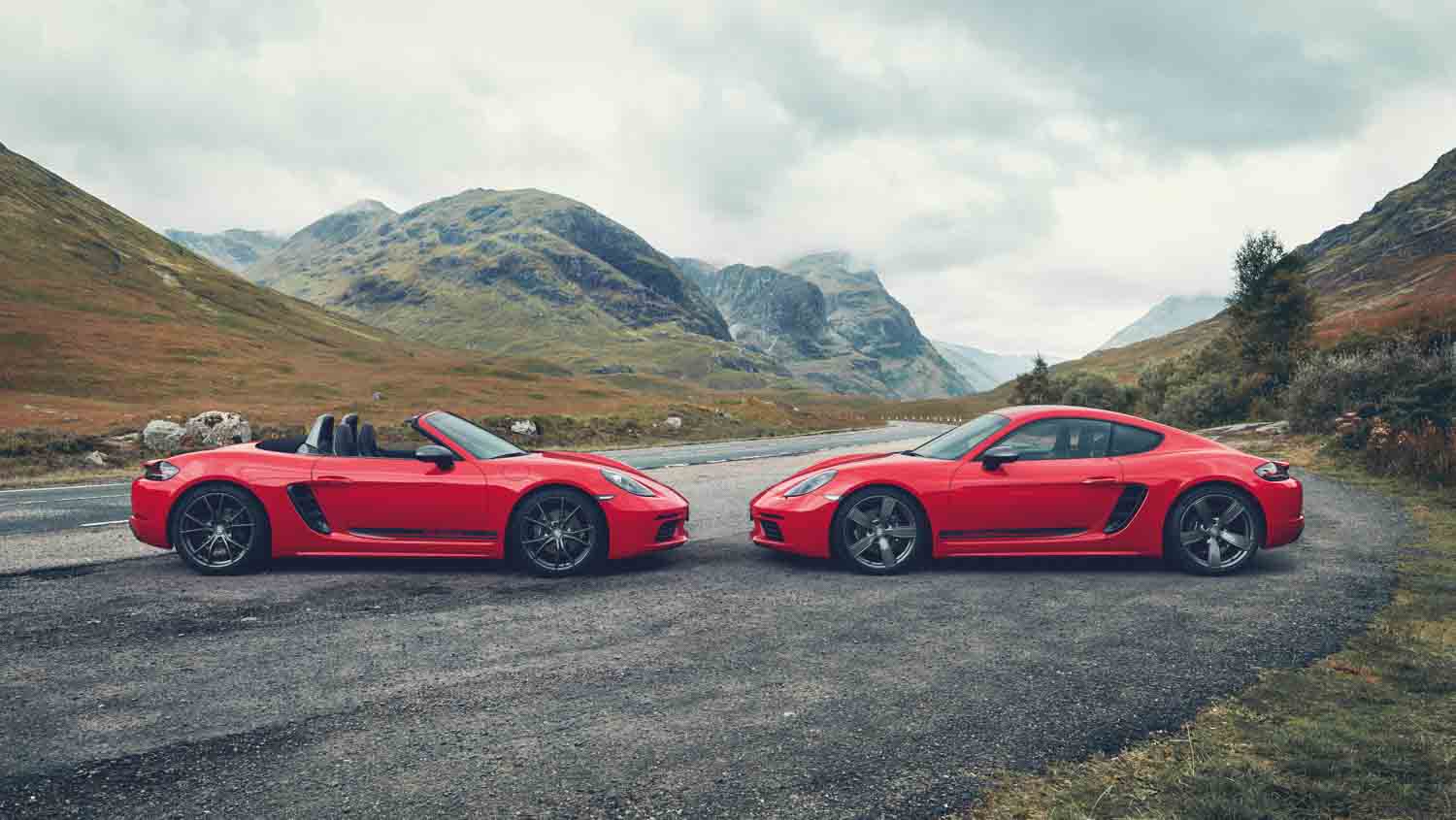 Glance at the on-paper spec of the new Porsche 718 T models and you might be confused as to precisely what’s changed. But dig a little deeper…

Acronyms and initialisms – they’re what you have to fathom out if you’re going to make sense of the Porsche 718 Boxster T and 718 Cayman T models. These two use the base 2.0-litre, 300hp four-cylinder turbo engine you can find in the entry-level Porsche and add thousands of euro to the price, without doing anything to the power or performance. Yep, both new 718 Ts do 0-100km/h in 5.1 seconds with a manual ‘box and 4.7 seconds with the optional PDK (there’s our first initialism…), with their top speeds rated at 275km/h in all circumstances. Fast, no doubt about it, but no faster than a ‘regular’ 718. So what’s changed?

Ah, well; that’s where you have to get your code-deciphering hat on. You can, to an extent, ignore the PDK we’ve already mentioned – that stands for Porsche Doppelkupplung, or double-clutch in plainer English, and so it’s just a synonym for ‘automatic gearbox’, in this case a seven-speed unit. It’s nice and it brings tactile little paddles to the glorious, Alcantara-clad GT Sport steering wheel that the 718 T models enjoy, but we’d be sticking with the standard-fit six-speed manual ‘box, if we were ordering – this has a physically shorter lever, emblazoned with red numerals, and that lack of stature translates into a throw action that’s more precise, taut and enjoyable than in a regular 718.

Also skip over PCM, which means Porsche Communication Management, or ‘infotainment’, for greater ease. Like the 911 Carrera T (991-generation) which brought this letter back to Porschephiles’ attention, as standard the 718 T models do without PCM, instead employing a twin-shelf storage unit with rubberised surfaces in the centre console. It’s an admirable conceit, as it’s supposed to save weight, but the amount of kilos not having PCM would save is negligible, so you might as well luxuriate with satnav and a stereo. The latter because, if the 718 T twins have one weakness, it’s a slightly flat and anodyne soundtrack.

No, the acronyms and initialisms you want to focus on are these three: PTV, PADM and PASM (and you can only really say one of these, PASM, making that the only acronym – thank you, Alan Partridge). It’s these three innocuous collections of what appear to be random-looking letters that permit the 718 T models to make so much sense. PASM first; it stands for Porsche Adaptive Suspension Management and that means adjustable dampers (two-stage), allowing the car to be more comfortable when cruising and better in control of its shell when charging hard. Here, PASM is teamed to a 20mm-lower, stiffer-sprung Sport chassis and this is not even a cost option on the regular 718s – no matter how much cash you have. So this might be enough to make the T worthwhile on its own.

However, for the T’s slightly inflated asking price, you also get Porsche Torque Vectoring (PTV) with a mechanical differential lock on the rear axle, making the 718 T even more preternaturally gifted in the corners than its exceptional 718 source material, as well as Porsche Active Drivetrain Mounts (PADM) – in the cars’ sportiest modes, these can lock up to ensure the engine and gearbox aren’t flexing about too much during hard acceleration, meaning as much of the mid-mounted boxer-four’s 300hp/380Nm exertions are being transferred to the rear rubber.

Throw in whopping 20-inch wheels on wider tyres all round (more grip) and the Sport Chrono Package, which doesn’t really do a lot mechanically (apart from launch control on the PDK cars) but which looks cool with the stopwatch situated centre-top of the dash, and what you have with the 718 Boxster T and 718 Cayman T are two thrillingly talented, deeply adorable fast-road cars that have you questioning why you’d ever need more delightful handling poise, crystal-clear driver feedback and rip-snorting straight-line performance than this.

Yes, acronyms and initialisms. They might look like nonsense written down, but when they’re put into action in – preferably – a 718 Cayman T without the PCM and fitted with the manual ‘box, they really couldn’t make any more sense than this. Because the T twins are utterly majestic.