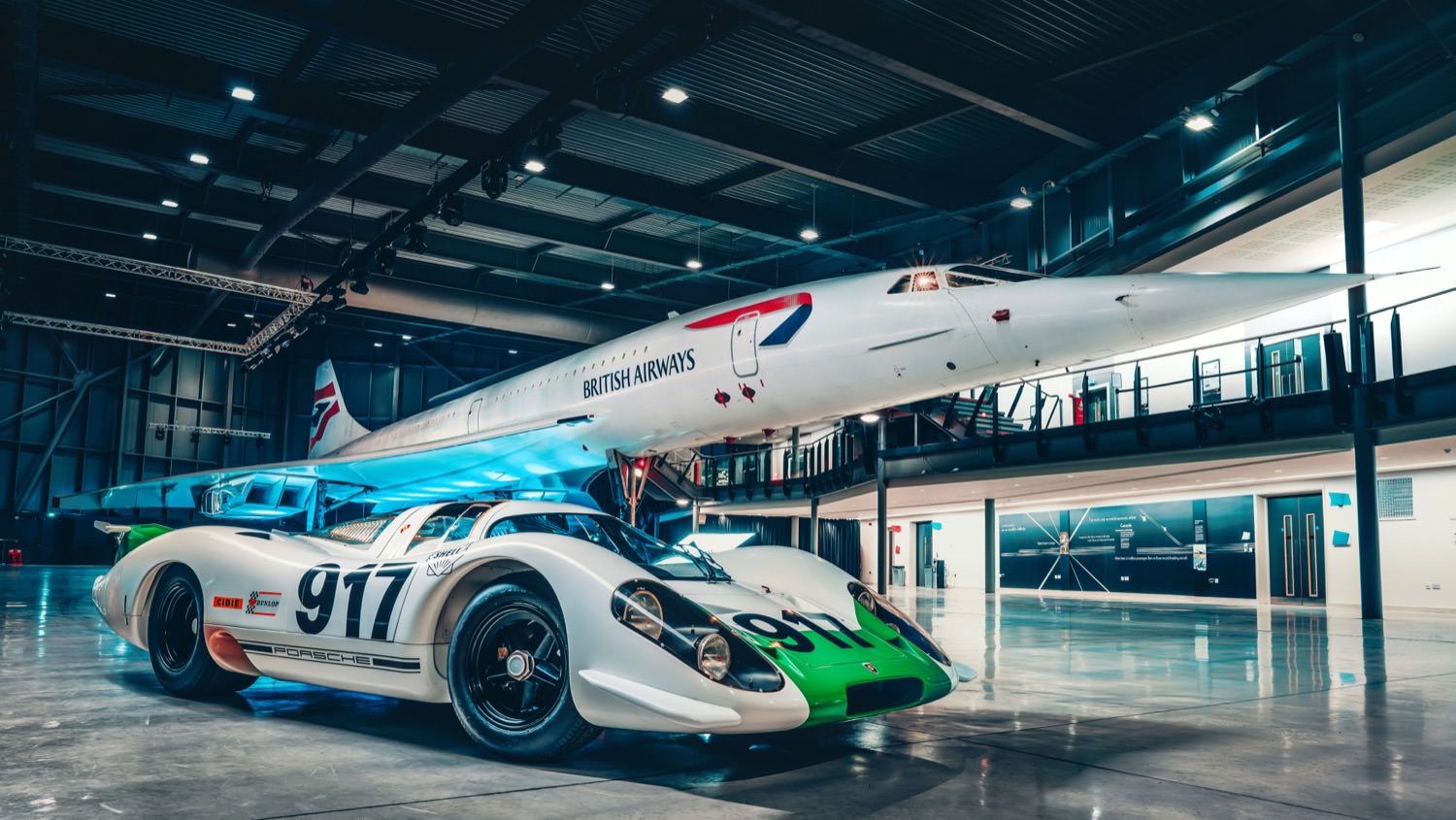 Fifty years ago, the world was a faster place than it is today. True, there was no such thing as high-speed internet. Usain Bolt was still yet to be born. Family cars generally speaking didn’t have much more than about 50hp.

Speed was in the air, though. In the summer of ’69, Apollo 11 was streaking towards the Moon at more than 28,000km/h. It was also the year that Concorde, that great over-priced Anglo-French boondoggle took its staggeringly elegant, Mach 2 profile into the skies. And it was the year that Porsche created the 917, still in many minds thought of as the definitive racing car.

Part of the 917’s definitiveness comes from the iconography of its shape. Beyond the small circles of motor racing enthusiasts, the car found fame when driven by Steve McQueen in his passion (vanity?) project, 1971’s Le Mans. Clad in those unforgettable powder-blue-and-orange Gulf Oil colours, the 917’s impossibly low, impossibly fast shape was burned into the cortexes of a million car nuts as the template for how a race car should look.

In so many ways, it almost never happened. When the 917 was created, it was exploiting a loophole in the then-new sportscar racing regulations that said if you could make 25 road-going examples of a car, then you could have a big 5.0-litre engine, rather than the punier 3.0-litre engines of your rivals. The CSI, the then governing body of world motorsports, figured that no-one would bother going to the expense of doing that.

They hadn’t figured on Ferdinand Piech. Decades before he became the chairman of the Volkswagen board, and decades before his overbearing management style would give birth to the dieselgate saga, Piech was working for Porsche. Being as he was married to Ferdinand Porsche’s daughter, it was essentially a job in the family firm, and Piech decided he had to make his mark. By calling the CSI’s bluff and creating 25 new 917 racing cars, he reckoned he could steal a march on the likes of Ferrari and Ford, and create a true world-beater, a car that would take an outright win at the Le Mans 24hrs.

Staggeringly, it worked. In spite of a compressed development schedule, Porsche managed to build the 25 917s in time for inspection and homologation — if only by lashing some of them together, using cleaning staff and secretaries to roughly bolt 917 bodyshells to random suspension components, anything to get the cars finished in time.

That hurdle jumped, the 917 then hit its next challenge — aerodynamics. The received wisdom at the time was that a long, low, swooping shape would slip through the air best, and give the car the best performance. And it did — the mighty 4.5-litre flat-12 air-cooled engine developed 520hp, but the 917’s slippery shape meant that it could top 400km/h on the long Mulsanne Straight at Le Mans. Unfortunately, wayward aerodynamics meant that it was close to undriveable, with drivers complaining that it would shimmy and snake its way down the Mulsanne, wavering from one side of the road to the other as the trees flashed past on either side. It would take a crash-course of aero development, and the design of the short-tail version, before the 917 would become unbeatable.

In 1970, the 917 took its first win at Le Mans in the hands of Hans Hermann and Richard Attwood, and Porsche hasn’t looked back since. It’s still the team with the most wins at the famed French race.

Fifty years on, Porsche has decided to mark the anniversary by bringing the first Porsche 917 built, wearing an evocative white-and-green colour scheme, to meet one of the few things that was faster in 1969 — Concorde. The pair were photographed together at the Royal Navy Fleet Arm Museum at Yeovilton on the south coast of England. There, now, lives Concorde 002, the second prototype, and a machine that first flew in April 1969. Across 438 test flights it would set a top speed of 2,179km/h.

The pilots of both machines

It’s not enough to bring two machines together; you have to bring the humans that make them work together too. So Porsche introduced Richard Attwood himself to Captain Tim Orchard who is joint World Record holder for the shortest time for the flight between New York and London – a distance covered in just two hours and 52 minutes.

“It was fascinating to be shown the Porsche 917, which was very much a car of Concorde’s era and I think developed with the same devotion and focus,” said Orchard. “The brutality of the car — its simplicity — is striking, and from I hear it was quite a formidable machine to drive. At the same time, it was a pleasure to show Richard around an aircraft which I was fortunate to fly for nine years. Concorde was unlike anything I’d flown before or since. Part jet fighter, part refined transatlantic cruiser. Its enormous reserves of power and its sheer competence were extraordinary. The Porsche and Concorde are kindred spirits, both created with enormous care by a small team of passionate people – yet capable of performance that was unheard of before they arrived.”

Richard Attwood said: “Like a lot of people I’m a big fan of Concorde and always wish I could have flown on her – I’ve missed my chance! The 917 and Concorde seem so pure and simple from the outside, but both mask an array of engineering ingenuity that is still extremely impressive by today’s standards. I would like to thank Tim for his time and patience in showing me around – I so enjoyed reminiscing about what it was like in the late 1960s and early 1970s and our belief that we could achieve just about anything if we put our minds to it.”