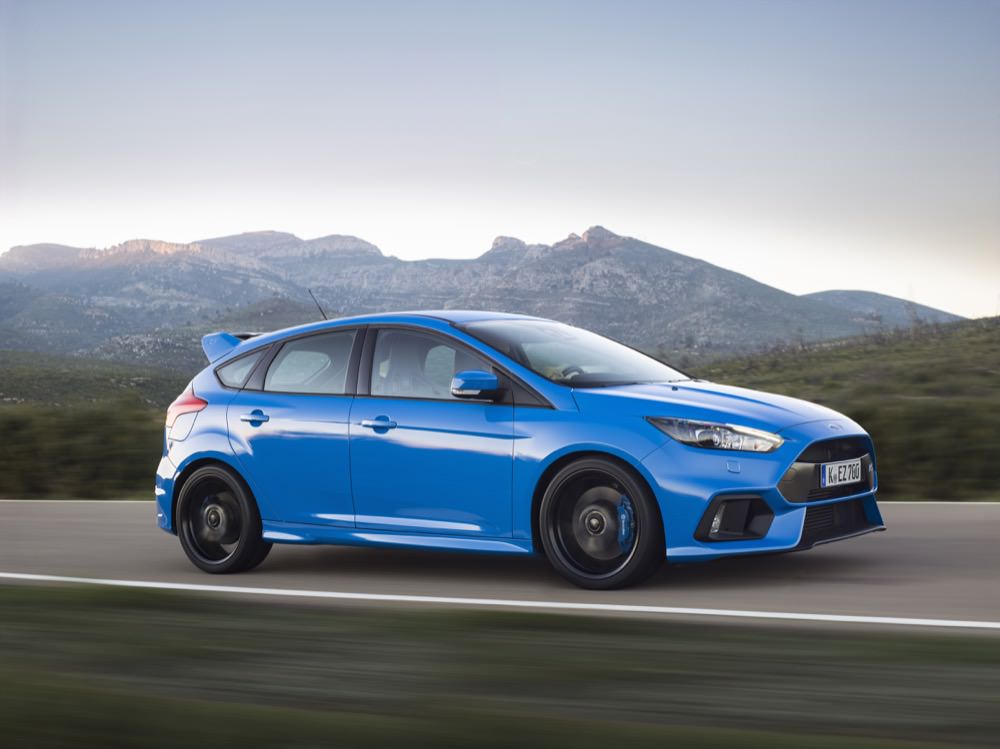 It’s the hottest of hot hatches and it’s getting everyone who’s driven one hot under the collar. It’s the Ford Focus RS and it might just be the best hot hatch of all time. Here are the ten things you need to know about Ford’s latest RS model… 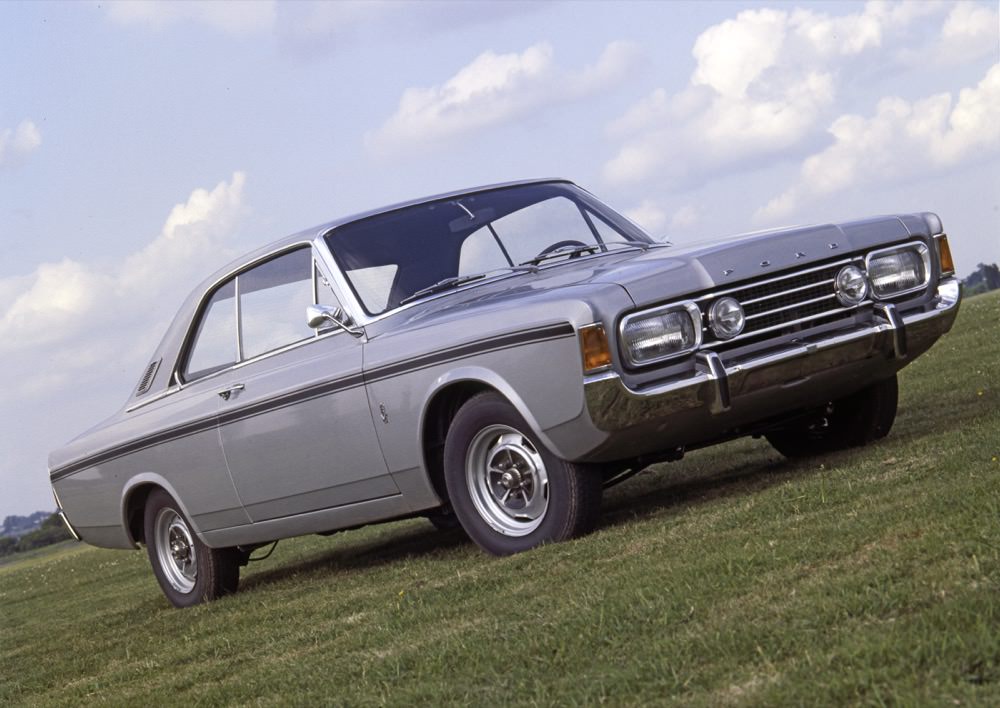 That makes it the latest in a royal lineage stretching back as far as 1968, which includes such amazing cars as the Sierra RS Cosworth, the Escort RS1600, the Fiesta RS Turbo and the Capri RS3100. Can you name the very first RS model ever launched though? The first person to do so wins an RS pen… 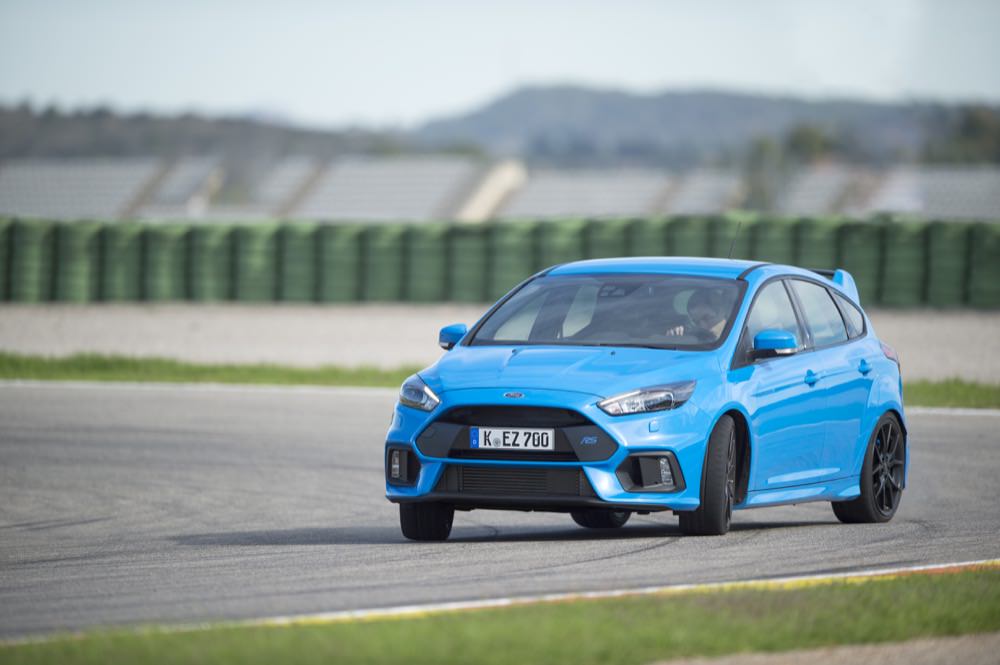 Ford hasn’t made a four-wheel drive high performance car since the Escort RS Cosworth (and the short-lived Escort RS2000 4×4) back in the mid-nineties. The last two Focus RS models (the 2003 Mk1 and the 2009 Mk2) made do with front-wheel drive and trick suspension and diffs to control their power. With 350hp from its Mustang-based engine though, a front-drive Mk3 RS would have just sat in the pits spinning its wheels… It’s a ferociously clever system, which allows a driver to pick from Normal, Sport, Track and Drift Modes. Yes, Drift Mode… 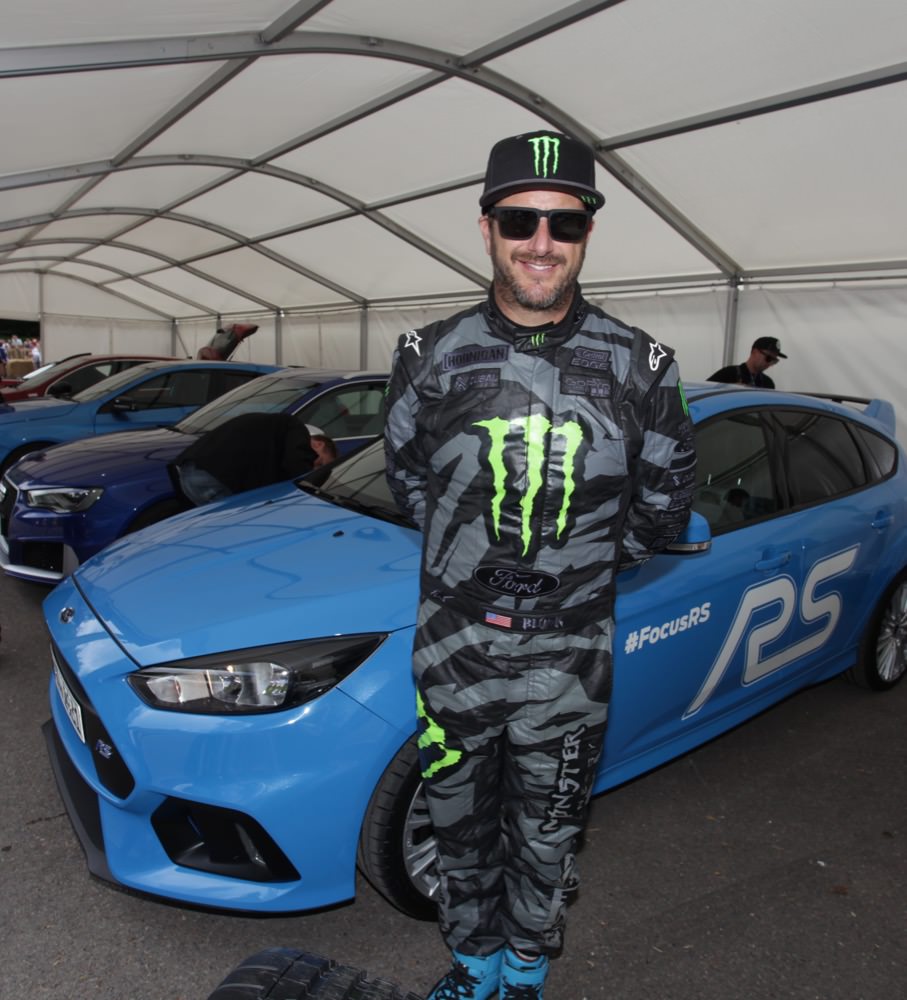 Talking to 50to70.com at the RS’s launch, King Block of Burned Tyres told us that “we actually soften out the adaptive dampers and dial back the steering effort a little in Drift Mode. If a car is too stiff, that makes it too hard to slide and it happens at a much faster rate. With softer suspension, you can lean into it more and have more control.” The man knows of what he speaks. Drift Mode loads engine power to the outside rear wheel in a corner to help get a slide started and then juggles power and brakes to help you hold the slide for as long as possible. Even those (like me) with a drifting disability can look like a rally-stage hero with Drift Mode switched on. 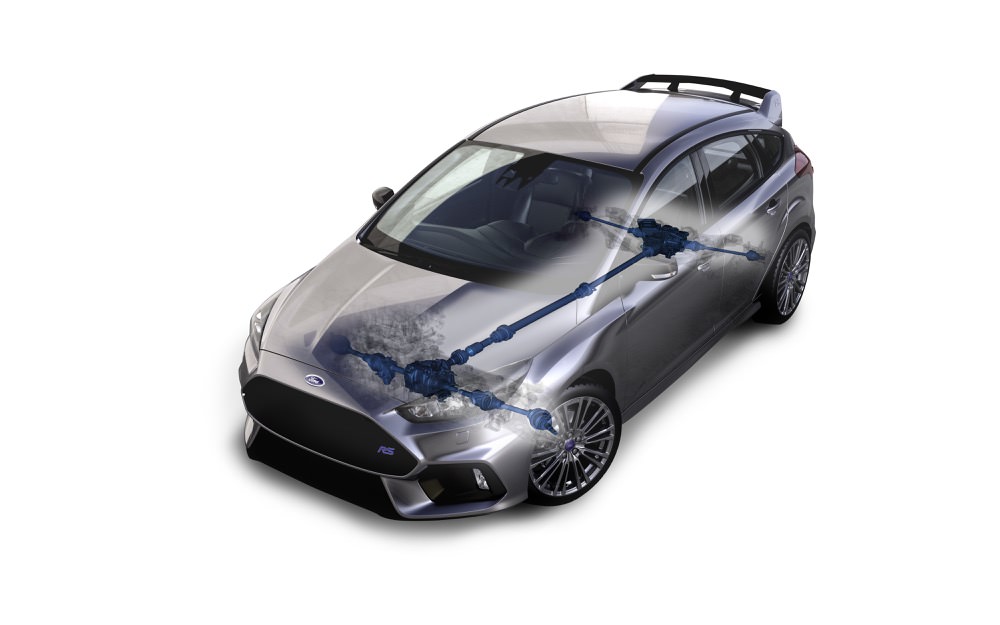 That’s right, there’s a tiny bit of Landie in every Focus RS. Ford’s head of vehicle engineering for RS, Tyrone Johnson, told 50to70.com that “the rear-wheel drive module is a GKN-supplied unit that was originally a Land Rover product. We put that basic Land Rover unit in our early prototypes and basically destroyed them, so it had to be totally redesigned. Actually, it’s quite a simple unit – just a differential and clutches, but the hard part is the software and the calibration. We got the mechanical parts to work pretty early on but that was followed by nearly two years of fine tuning the calibration.” 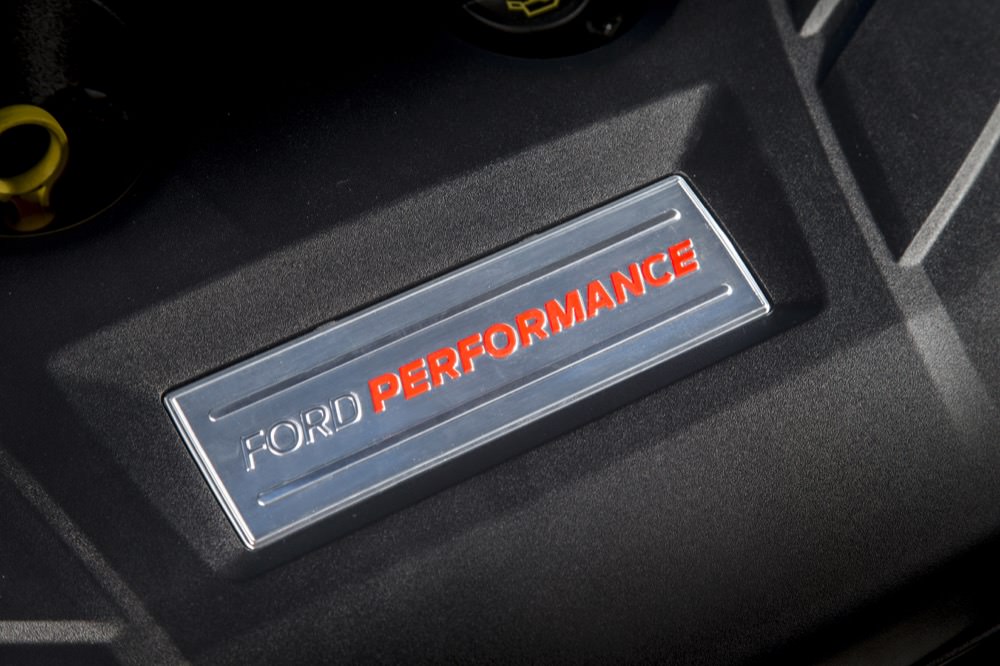 The RS brand has always been very much a European thing really, until now. As part of the One Ford plan that sees, more or less, a single global plan for all Ford products, the RS is part of a worldwide high-performance push for Ford, using three groups of vehicles. HP1 is the Focus ST and Fiesta ST, while the RS sits (alongside models such as the Mustang 350GT) in the HP2 category. At the top, in the Elite category, sits the GT supercar, alone for now. 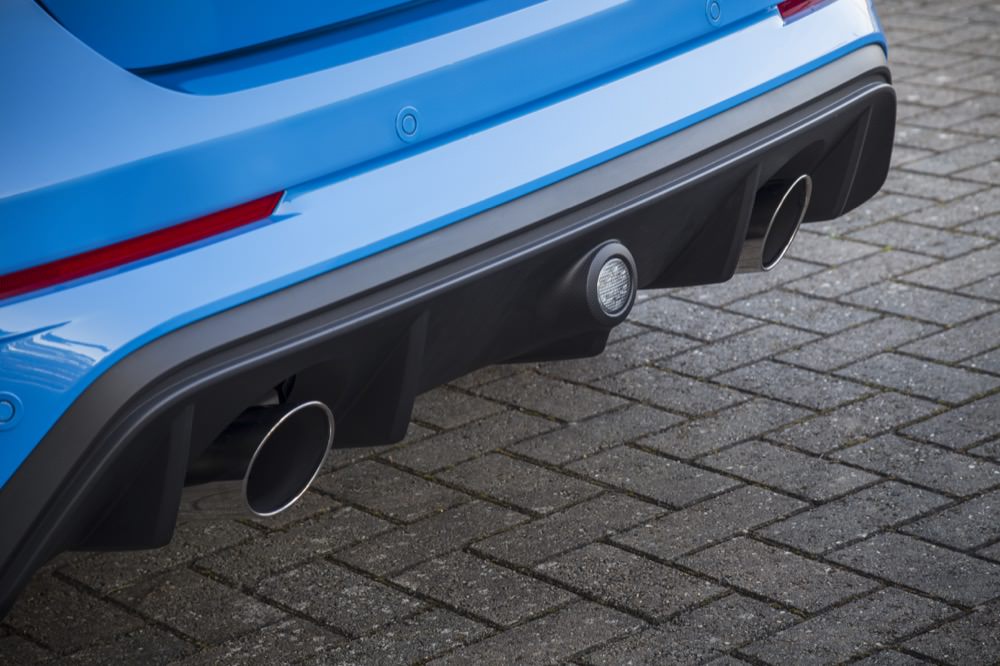 Some of the noises you’ll hear in the RS are synthesised, as it uses the same basic sound generator as the Focus ST, to make the engine a little more tuneful in the cabin. Actually, Ford engineers removed some of the sound-deadening material in the RS, to allow more exhaust noise through, and we can tell you that, even from the outside, away from the sound generator in the cabin, the RS still sounds mean and hungry. Better yet, it pops, bangs and crackles on the overrun just as a rally-stage refugee should do, but it’s not a fake sound. Ford pointed out that competitors use systems that spit unburned fuel into the exhaust manifold to create overrun sounds, but the Ford system actually uses the engine management system to induce a temporary misfire, which is the reason that real rally cars make the same noise. So it’s more authentic a sound than the fuel-spitters. 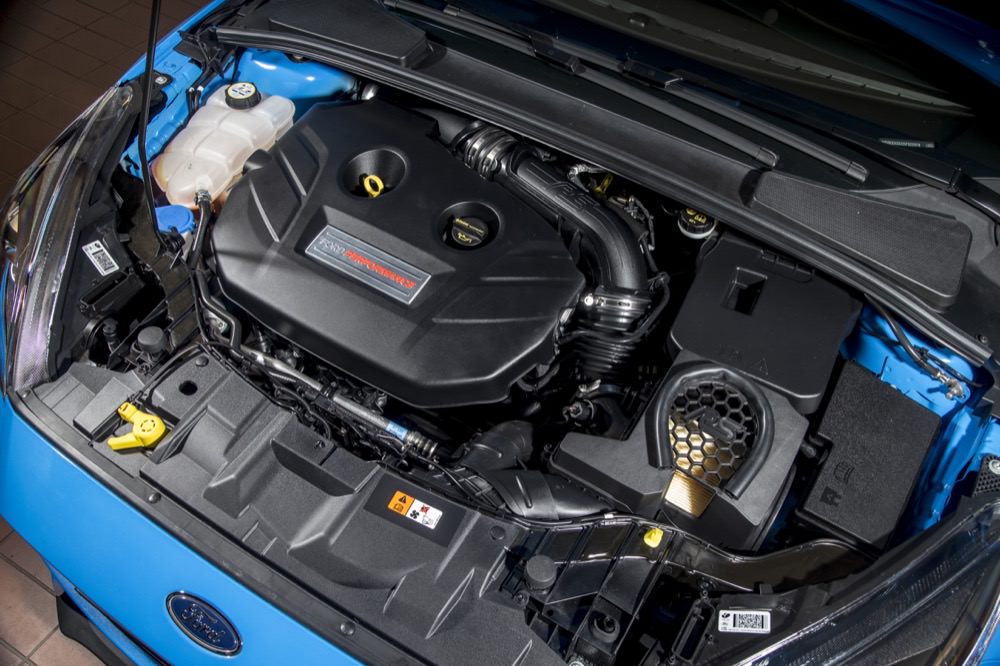 7. It’s not as powerful as it should have been.

In early dynamometer testing, the Focus RS development team kept blowing up engines because they were trying to extract too much power. While the 2.3-litre EcoBoost engine is shared with the 313hp Mustang, inside it’s almost entirely different with a new turbo, new cylinder liners and pistons, a new head and new installation. And it could have had 400hp – that’s the rumoured figure early development engines were pumping out, but they kept blowing turbos (thanks to a bearing harmonic issue) and head gaskets, so Ford dialled the power back a bit in the interests of reliability. With a 400hp Golf R coming down the line though, don’t expect the Focus RS to have a ‘mere’ 350hp for long…

8. It’s a manual, but it has launch control.

There won’t be a dual-clutch Focus RS, and discussions about hybrid drive and electric power assistance were stopped at an early stage because they’re expensive and Ford wanted to keep the RS’s price within the bounds of sanity. It does have launch control though, a rarity on cars with a manual gearbox. It’s easier to engage than many rival systems too – you just flick through a couple of menus on the steering wheel buttons and then plant your foot on the throttle. The RS will hold revs to the optimum point and then you just sidestep the clutch. It then kicks you in the backside like an angry mule, and juggles the traction control, ESC, 4WD and damper stiffness to achieve the perfect getaway. All you have to do is pull for second gear when the dashboard does its Christmas tree thing… It’s a brutal system though, and even though Ford told us that the car has been thoroughly tested for reliability, we would recommend choosing our launch control moments carefully. 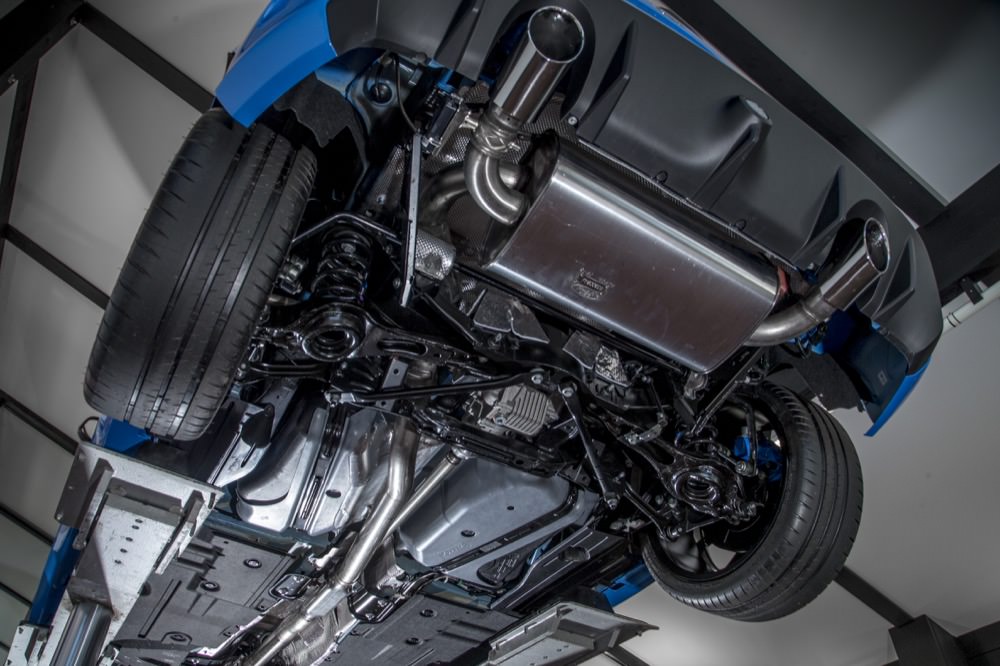 9. It has been tested to destruction.

And then some. The RS, we were told, has been through the standard Ford reliability and durability tests, which basically involve taking an innocent car off the prototype line and turning it into a cast extra from The Texas Chainsaw Massacre. At proving grounds such as Lommel in Belgium and arctic tracks high up in Lapland, the Focus RS was tested to the point of almost destruction. As one senior Ford engineer put it to us “basically, at the end of that process, the car is just destroyed.” Ah, but this is an RS though, so it has to be able to do all of that and still be fast. So, at the end of the standard testing procedure, and without so much as a squirt of WD40, the cars were shipped to the Nardo high-speed test track in Italy and tested some more. Like at full-speed, day and night, for 4,000km by rotating teams of torture specialists… we mean test drivers. And then, only then, did the RS get a green tick in the ‘signed off’ box.

We’re serious. The Focus RS comes with 19-inch rims as standard (with forged alloys that are almost 1kg lighter per corner as an option), but the braking system was described as “the biggest we could fit under an 18-inch wheel.” Huh? Why not a 19-inch wheel? Because of regulations, that’s why. Several European countries still require you to be able to fit snow-chains in certain areas, and the chains won’t fit on a 19-inch wheel – so Ford had to offer an optional 18-inch wheel, specifically for snow chains, so the braking system had to fit within those dimensions. Doesn’t stop it feeling like slamming into a brick wall, mind – and you’ve got to love the optional baby blue paint finish on the Brembo four-pot callipers too.

If you’d like more, read the CompleteCar.ie review of the new Ford Focus RS.