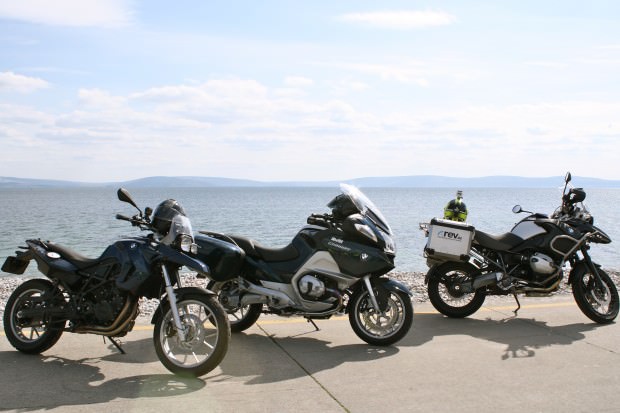 My May Bank Holiday weekends used to be the usual stuff of not doing a whole lot and generally taking it easy. Then a few years ago I met a man by the name of Aidan Lynam who had what I thought was a crazy idea of running a three day motorcycle run around the Emerald Isle to raise funding and awareness for Down Syndrome Ireland. At the time I agreed to go along with it and helped in whatever way I could, namely suppling a location to start it from and copious amounts of coffee. 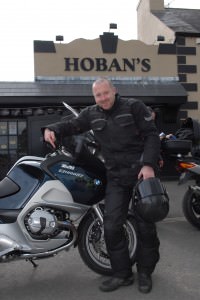 Seven years later, and after missing a few of them, I once again find myself taking part in the RevUp4DSI. Before me are just over one hundred motorcycles, many of which have pillions all lined up and ready to take on three days of what can only be described as exceptional biking. The support crew is nearly as impressive as the motorcycles that have assembled with Red Bull and 98FM helping to get all the participants hyped up. The variety of transport is incredible, from cruise liners like the 1800 Goldwing right down to what can only be described as a pristine RS250. I myself would be riding a brand new BMW R1200 RT which had only come out of its crate two days prior so careful running in procedures would have to be adhered to. Naturally.

There’s something about motorcyclists that brings out a sense of camaraderie that I’ve rarely seen elsewhere, and nowhere is this more prevalent than when a charity or special cause is involved. This weekend brings together a bunch from all walks of life who have all done various different things to raise as much money as they could for a deserving charity and are now freely giving up their entire long weekend to go and have some serious fun. The route itself is kept a very closely guarded secret, the riders only know their routes that morning and the stages all encompass some of the finest roads in the country. How Aidan and his crew find them all still boggles me after all these years.

Day One sees us leave Dublin, heading out through Meath and north towards Cavan. All the roads up to our first pit stop are superb and following a ‘comfort break’ and caffeine stop I’m off again with my partner in crime, Ian Beatty, leading the way on his BMW R1200 GS Adventure (as I hadn’t bothered reading any of the route details). At our second stop just outside Manorhamilton we mingle with a few of the other runners and riders which was where I discovered 98FM’s Steven Cooper lurking around on his BMW F650 GS. He mentioned how he was still finding his feet again in the saddle and it turned out that this was a far as he had ever ridden before. With two more long days ahead of him he was already developing that thousand yard stare! The roads out of Manorhamilton were beyond epic, giving myself and Ian a chance to really open up our boxer engines.

https://50to70.com/most-popular-dating-sites-in-california/The roads up there really are top notch for biking and if you haven’t ventured up there yet you’re missing out. Our last leg of the day saw up riding south again towards Athlone which would turn out be our base for the whole weekend. It was great to see all of the participants line up just outside the town and arrive in convoy together. We had to wait longer than others for some, but a tip of the hat was deserved to the couple who were taking part on a rather vintage looking Lambretta – I’d say that certainly made for an interesting weekend. Much of that first night was spent regaling eachother in all sorts of tall tales and catching up with people many of whom I hadn’t seen since the last event twelve months ago.

Day 2 ended up not quite being the early start that had been planned at 3am, but once Beatty and our new recruit Cooper had been rounded up over breakfast we hatched our plan for the day. Sunshine greeted us as we headed west out of Athlone, thankfully we weren’t the last ones to leave. The great thing about the riding over weekend is that you can start and ride entirely at your own pace and seeing as Cooper was still progressing up the experience curve it meant that we were able to ease along at a nice pace.

i only date rich guys

The route brought us over towards the very scenic west of Ireland and much of the day felt like we were participating in a video for Irish tourism. As we neared lunchtime the lure of a very nice little Italian place called and once Cooper had done his live report back to 98FM it was time to tuck into some decent grub. Eating traditional Italian in an Irish speaking region of Spiddle did seem a little strange but we decided to gloss over it.

Night two of RevUp consists of a group dinner followed by the customary award giving. It’s during this that the real stars of this event shine through. When we hear of some of the stories of what people did to raise money for this event it is both funny and in many cases very humbling. Other commitments meant that I’d have to miss out on the third day of riding but I was later told it was every bit as good as the previous two days.

Motorcyclists are a funny old bunch and when their passion for two wheels is equalled by their support and dedication for a charity like Down Syndrome Ireland it is incredibly impressive. In one weekend a group of no more than 150 people have managed to raise in excess of €130,000 and to date that little event that I told Aidan he was mad for thinking of has raised well over €1,000,000. The numbers are impressive, the number of faces that are still here that were on the first event are even more impressive.