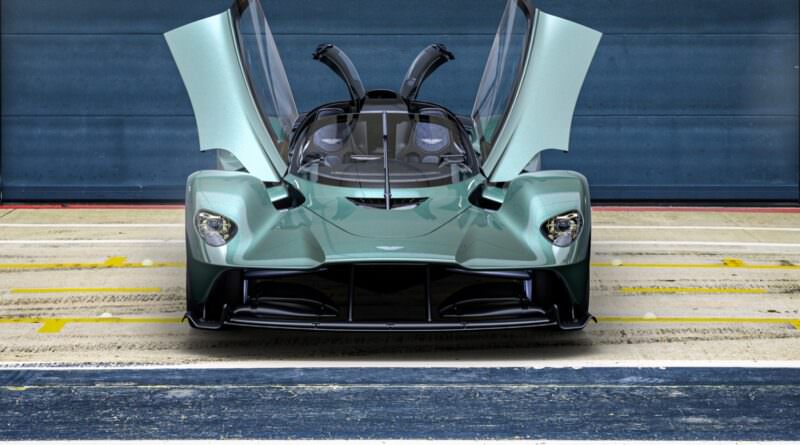 The Aston Martin Valkyrie Spider gets a limited production run, but it’s already sold out. First customer deliveries will begin in 2022.

Not content with already having one of the most spectacular hypercars heading for production, Aston Martin has created an open-top Valkyrie Spider. The car made its debut at Monterey Car Week, and it looks every bit as wild as its hardtop sibling.

Quite a bit of work has gone into creating the Valkyrie Spider. The car’s original design that features gullwing doors wasn’t going to work with an open-top configuration. Its designer, Adrian Newey, worked with engineers from Aston Martin and Red Bull Advanced Technologies to create a solution that remains attractive. The doors are now front-hinged dihedral items that give the car a unique look.

A fastidious approach to weight reduction has been a crucial part of the car’s design and that’s no different with the Valkyrie Spider. In comparison to the coupe, the Spider has only a marginal weight increase. The removable roof uses a carbon fibre central panel that latches onto the rear of the tub and at the windscreen. A pair of polycarbonate roof windows are hinged at each side to provide upward views. Once the doors are open, the roof can be removed and stowed away.

Newey said: Right from the very beginning of the Aston Martin Valkyrie project we were driven by exacting targets that went way beyond any previous road car and the Valkyrie Spider brings that same ethos to the open cockpit hypercar category.

“What you see is a simple removable roof panel, but the challenge of remaining true to the Valkyrie concept was anything but. Maintaining aerodynamic performance with the roof removed was of paramount importance, likewise keeping any unavoidable weight gains to an absolute minimum whilst maximising enjoyment for the driver.”

The Valkyrie Spider’s engine remains the same as the coupe, with its hybrid V12 powertrain producing an output of 1,155hp. Revving to over 11,000rpm, the 6.5-litre V12 should sound even more spectacular with the roof section removed.

Giant full-length venturi tunnels run along either side of the car’s cockpit floor and channel air into the massive rear diffuser. When in track mode, the Valkyrie Spider can produce more than 1,400kg of downforce at 240km/h.

Owners can expect to feel what it’s like to drive an LMP1 car on the road. The extreme driving position with a super-low hip-to-heel height ratio and six-point safety harness will be unlike any Aston Martin that has gone before. A trio of cameras will help the driver to see around them via displays inside the cabin.

Unsurprisingly, Aston Martin has already confirmed that the Valkyrie Spider is oversubscribed, with no shortage of wealthy elite keen to own a piece of hypercar cool. The planned production run will be limited to only 85 examples, and it will be available in both left and right-hand drive configurations. The first customer deliveries are due to begin in the second half of 2022.

Aston Martin’s CEO, Tobias Moers, said: “The Aston Martin Valkyrie is the product of incredible innovation and technology, but above all it has always been about emotion. With the Valkyrie Spider we are taking that passion and emotion to the next level. The driving experience promises to be truly sensational. The sound of that 6.5-litre V12 engine revving to over 11,000rpm with the roof removed is something I cannot wait to hear.”

The Aston Martin Valkyrie is expected to cost between €2.35 and €3.5 million.