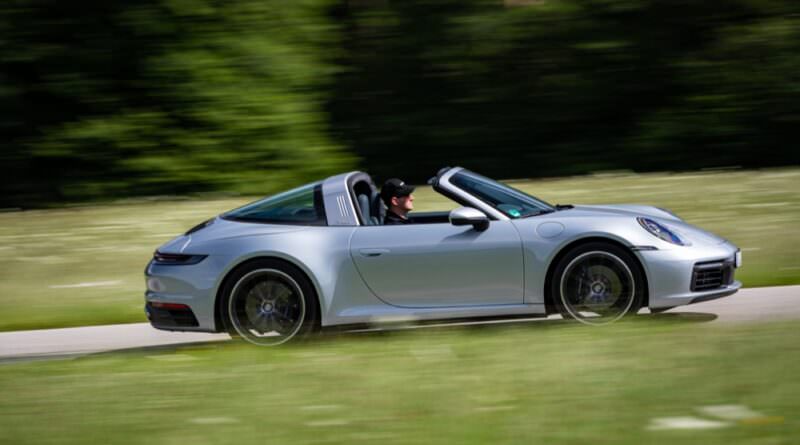 The 992 Porsche 911 Targa doesn’t add much to the open-top driving experience, apart from panache and style. Therefore, we adore it.

Look up the term ‘skeuomorphic’ and you’ll have the perfect definition of the 992 Porsche 911 Targa’s attractive roof mechanism. Because, seriously, this is a neunelfer model that is – if we’re being brutally honest – totally redundant in the modern age.

Most people know the story of the Targa’s gestation but we’ll just go over it quickly once again. In the 1960s, Porsche wanted to build an open-top version of its now-legendary, then-fledgling 911 sports car. But the possibility of tough crash legislation being introduced in the US, one of Porsche’s most lucrative global markets, meant that a fully ‘open’ convertible 911 was out of the question. The German company decided to sidestep this issue by making the original Targa, its name taken from the Targa Florio road race on Sicily at which Porsche (at the time) was currently in the middle of a hot streak of form – the manufacturer won the race ten times between 1956 and 1970, and in 1966 it was the reigning champion at the event and had taken victory three times out of the past four runnings.

What the road-going 911 Targa did was to create the quintessential convertible experience of full ‘wind in the hair’ motoring along with an element of safety built in, as a steel rollover hoop was added to the bodywork where the B-pillars would be on a tin-roofed car. Normally, this sort of feature wouldn’t be desirable on a soft-top, where a completely flat shoulder-line aft of the windscreen is the preferred modus operandi, but somehow the 911 Targa made its crash-conscious form look unutterably cool.

Of course, the daft thing is that the safety legislation never came and so the 911 Cabriolet eventually arrived in 1982, fully 15 years after production of the Targa commenced. And yet, Porsche never really had the heart to kill the Targa off, as it should have done as the body type was now an evolutionary dead end. It continued alongside the fully open Cab and also odd variants like the Speedster in the 911 line, although it went a bit off-kilter in 1996 when the rollover hoop that so defined the Targa was replaced by a ‘greenhouse’ sliding glass roof-panel system for the 993, 996 and 997 generations of the 911.

However, in 2014 and for the 991-series of the sports car, Porsche did something brilliant. And totally needless, too, but hey? Who cares? What it did was to bring back the aesthetic of the original Targa with a complicated folding glass-and-metal structure that defied belief to watch it in action. Whereas the oldest Targas’ roofs had to be removed manually and then stored away from the car for open-top moments, and whereas the ‘middle’ Targas only had fancy full-length sunroofs, the 991 Targa had a small patch of fabric hood above the front-seat occupants that could be folded away totally electrically in a matter of seconds. This is because the whole upper-rear-deck contrivance of the 991 Targa lifted itself up and away from the car on long arms, waiting patiently behind the Porsche’s engine cover as the fabric segment of the roof stowed itself away in a small compartment behind the vestigial rear seats (yep, the Targa remained a 2+2… in theory).

So it’s not really a surprise that Porsche revived the Targa for the 992 Mk8, nor is it in the least bit baffling that exactly the same roof mechanism from the 991 was carried over wholesale. Ostensibly, the Targa is supposed to have a bit more torsional rigidity than a Cabriolet but as the 992 Carrera 4S Cabriolet is such a brilliant thing to drive, we’re not sure that metric justifies the Targa’s continued existence. Especially as it’s obviously a long way off the involvement than a 992 Carrera 4S Coupe would provide, although – usefully – the Targa is considerably cheaper than an equivalent Cabriolet to make it as tempting as possible (it’s more money than a 4S Coupe, natch).

But is ‘coolness’ enough to merit the Targa’s return for 2020? Is it really any nicer to travel in than a 992 Cab, especially as that glass rear screen can funnel wind from the roof opening above back towards the front-seat occupants?

Well… yes, it is. There’s just something deeply, deeply satisfying about travelling in a Targa 4S. You need to drive it just within itself to get the best of it, as ten-tenths, on-the-door-handles commitment behind the wheel will merely leave you feeling frustrated at the excessive weight transfer the 992 is trying to corral. But on a cruise, with the twin-turbo flat-six chuntering away at the back and the roof dropped away, the effortless and carefree vibe of the 1960s is well and truly alive and kicking. So not only does the 992 Targa teach you new and unusual words relating to the unnecessary retro-ism of its roof mechanism, it also makes you feel good in a way few open-topped cars ever will.