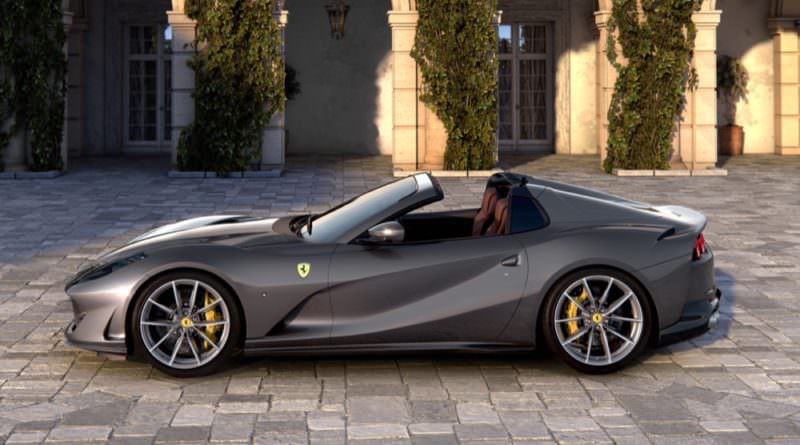 Ferrari has revealed its F8 Spider and V12-engined 812 GTS at the Universo Ferrari. We were there.

Was Ferrari trolling the Frankfurt Motor Show? On the eve of the bi-annual exhibition, an event that Ferrari is not attending for 2019, the Italian company flew a plane full of motoring journalists to Italy for their own private Ferrari motor show of sorts. We drooled over the Ferrari Classiche models, were mesmerised by the carbon bodywork of the latest Formula One car and sat in the simply spectacular new Ferrari SF90 Stradale (how low down is that engine?!), but the main focus of the day was the unveiling of not one, but two new Ferrari models.

Along came the Spiders

First up, and of no surprise at all to the world, was the latest in a long line of mid-engined V8 Spiders. This one, based as it is on the F8 Tributo model, is called the Ferrari F8 Spider. Like the Tributo, it takes the Ferrari 488 as its basis, but mixes in plenty of lessons learned from the spectacular 488 Pista. Most notably engine and clever aerodynamics that downforce without increasing drag. By way of reminder, the twin-turbocharged 3.9-litre V8 has been a bit of a star of the International Engine + Powertrain of the Year awards, thanks to its mixture of technology, clever engineering and downright excitement. The F8 Spider’s engine makes 720hp and 770Nm of torque, enough to catapult the open-topped two-seater to 100km/h from rest in just 2.9 seconds. It’ll top out at 340km/h so you better be confident in your hairdo if the roof is down…

The F8 Spider’s roof is called an RHT (Retractable Hard Top) by Ferrari and its movement from open to closed or vice versa is slick – taking 14 seconds. That can be done at speeds of up to 45km/h. Incidentally, the roof on the 812 GTS comes with all the same vital statistics. And actually, the 812 GTS lays down more or less identical performance figures as the F8 Spider, too. It goes about it in a rather different way, though.

Where the F8 uses a turbocharged V8 mounted behind the cabin, in the middle of the car, the 812 GTS is powered by a naturally aspirated 6.5-litre V12, positioned up front. That frees up more space for people and luggage, as this is technically a GT, meaning it’s to be used predominantly on the road and, theoretically at least, in everyday driving. Not that we expect its 800hp and 718Nm of torque to feel lazy and relaxing in any way. Ferrari reckons it’s the most powerful car in its class right now.

And speaking of which, Ferrari also reckons that it has been 50 years since it has launched a series production Spider powered by a front-mounted V12. You can cite the existence of low-volume models such as the 550 Barchetta, Superamerica, SA Aperta and F60 America all you like, but the 812’s real predecessor is said to be the Daytona Spider (or 365 GTS4 if you prefer) of 1969. That’s where the new car gets its name, incidentally.