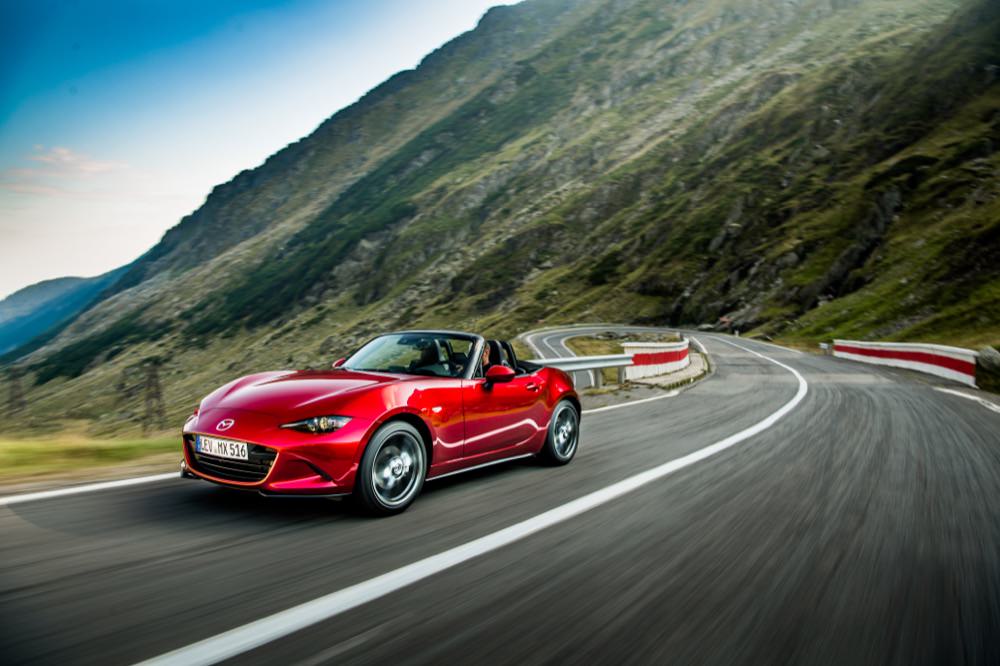 Romania might not be the first country to come to mind for a drive in a sports car, but it is home to the mighty Transfăgărășan road.

The road was made famous by Top Gear, and is a tortuously twisty route that was built in the seventies for strategic military purposes and is now a tourist landmark in its own right. Mazda reckoned that it would be a good location to show off its updated MX-5. Who are we to argue? 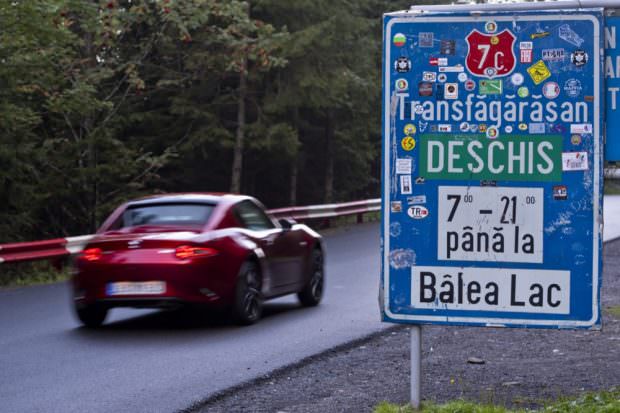 Our journey starts in Sibiu, slap bang in the middle of Romania. It’s an uneventful 50 kilometres from the small airport to the foothills of the Făgăraș Mountains of the Southern Carpathians and the start of the interesting road. It climbs quickly upwards through the trees, sometimes opening out into scarily big drops into near-abysses. The crash protection lining the road is a little haphazard, alternating between huge warning signs of the danger stuck onto bright red-and-white barriers and no protection at all. As in, none. Zero. In the fog, you can’t see the bottom of the valley, but you sense it’s very far away. That focuses your mind on driving. 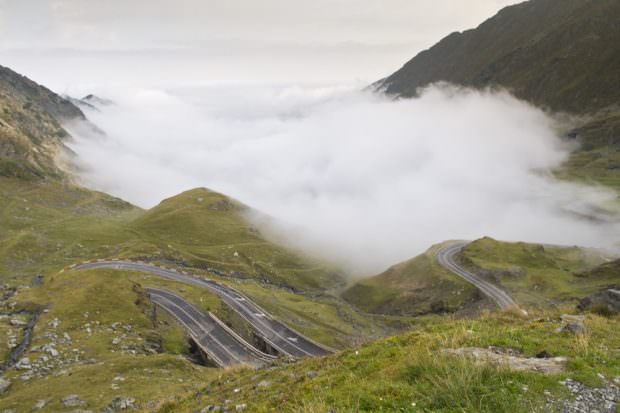 The surface is equally inconsistent, swapping between brand new tarmac and ancient pothole-riddled road as you dive briefly under concrete overhangs that presumably are there to protect the road from water and rockfall. It’s a little early to have the roof of the MX-5 down at this stage, but this is the kind of car in which you take every opportunity to do so. No excuses when it takes mere seconds to drop the fabric top, without moving from the driver’s seat. You don’t need to be travelling quickly to then appreciate the sounds and smells of the outside world, as the exhaust note bounces off the mountain walls. 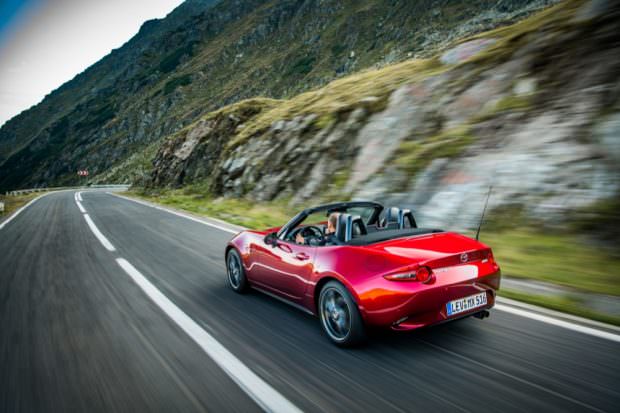 Dawdling traffic (the MX-5’s more powerful 2.0-litre engine makes it easy to nip past) and endless stray dogs (the brake pedal is well-weighted and the brakes themselves highly effective) punctuate the slog up the mountainside before finally the road and landscape opens out as you’ve seen in the pictures. Wow. Just wow. It’s a ribbon of concrete and tarmac, snaking its way up the valley to the peak above. What’s more, the fog has lifted and it’s well-sighted, so we can see well ahead and know that it’s safe to use the car’s performance and cornering ability to the full. 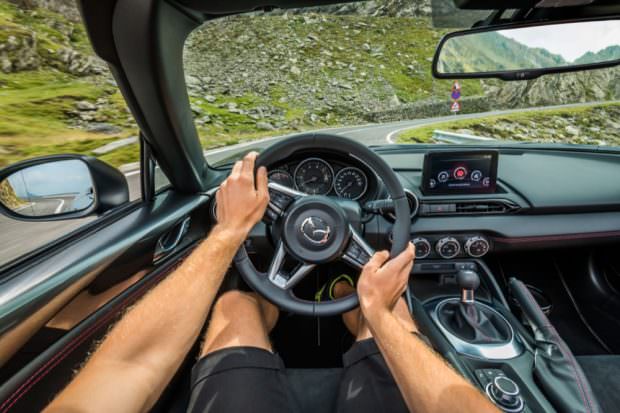 Even the upgraded engine isn’t over-endowed with torque, so it’s all about momentum conservation in the MX-5 on this road, and few cars are as well-equipped for the task. The steering is responsive and communicative, the pedals are ideally spaced for heel-and-toe down-changes and the six-speed manual gearbox is an absolute delight. Through all this, the more vocal engine encourages you to use the extended rev limit to the full, making full use of second and third gears in a blur of hairpin after hairpin. It’s so engaging that you soon forget the broken road surface and unprotected sudden drops and just revel in one of the most fun, yet also quite simple sports cars on sale today. 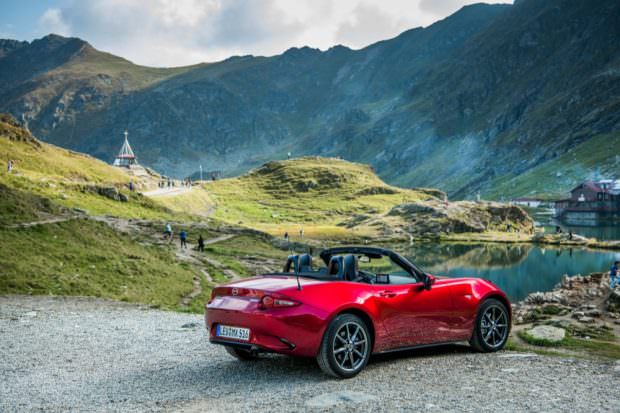 Eventually, we reach the ‘top’, some 2,000 metres above sea level and chockful of tourists taking selfies and admiring the epic views of the mountains and lake. Most purchase some street food from the many makeshift shacks on hand and turn around and go home, but we’re going through a tunnel to the south side of the mountains. It’s slow, unlit and damp (best to put the roof back up!), but it allows us out to the other side and an equally spectacular vista. The road, however, is why we’re here and the next few kilometres sweep left and right down the mountain. If anything, it’s an even better playground for the MX-5, as the surface is improved and there are more long corners, not just hairpins. It tests the brakes, but they don’t miss a beat. 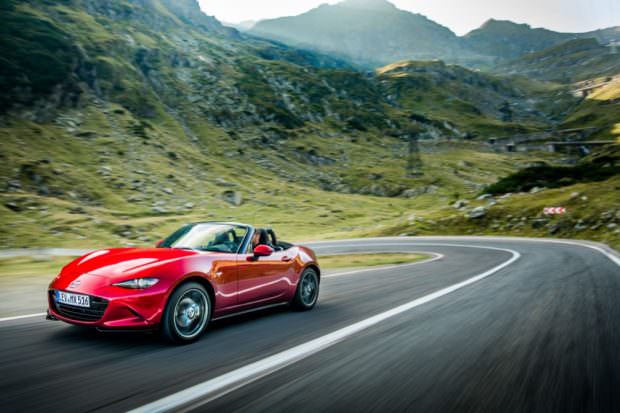 And then, suddenly, we’re away from the highest of the mountains and trees line the road. However, to turn back now would be to miss 40 kilometres of the most challenging tarmac ever, south to the Vidraru Dam. Other than nasty square-edged holes in the road (unfinished pothole repairs), the surface is decent, but it changes regularly, as does the road’s direction. Nonetheless, there’s room to get past slower cars and we’re rarely held up. There are few opportunities to get out of third gear with any real conviction, which illustrates the relatively low speeds, but that certainly doesn’t reduce the enjoyment at the wheel. 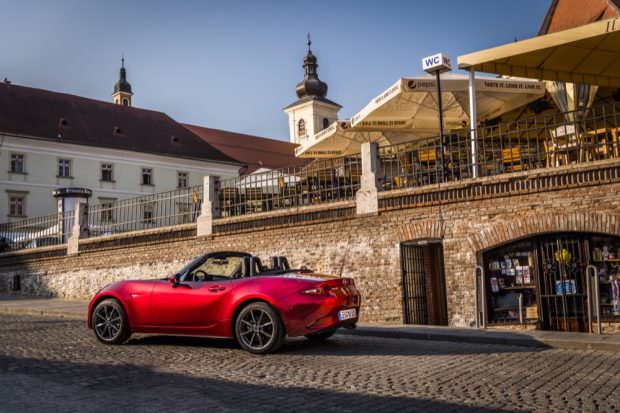 Finally, sated, we arrive, have a bite to eat in a café and set the satnav back towards Sibiu. If you ever get the chance to drive this magnificent road, make sure you have something as brilliant as the new Mazda MX-5 at your disposal.