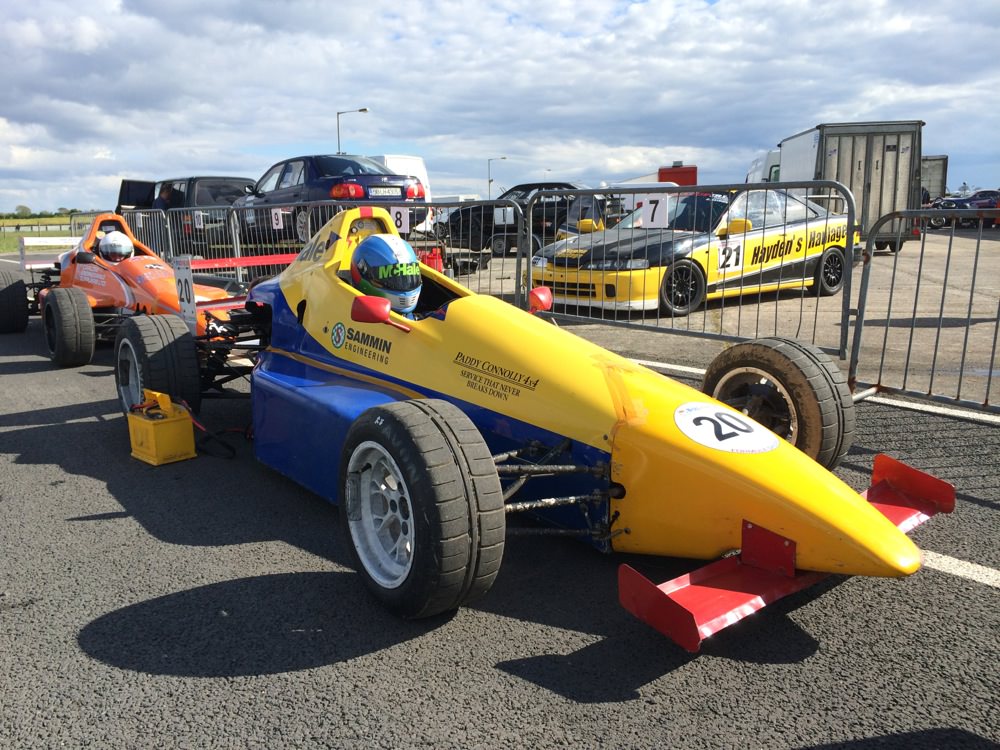 ‘How far away is that barrier?’ That’s the question I pondered as I hopped and skidded my way backwards across the freshly cut County Down grass at 100mph. What’s worse is that really I knew the answer. There is very little run off area on this particular corner yet all I could do at this stage was hang on tight and hope that the car, now with only three wheels, would shed most of its speed before I reached the scene of the accident.

Sunday started off bright but intermittent showers meant that the track never fully dried leaving the back of the circuit wet and the front dry. Bishopscourt is a track which I had never driven before and its high speed challenging nature meant that I had been up against it all weekend, with just one test run available to learn the track. Having been as high as 2nd at one point during qualifying, I lined up seventh for race one. 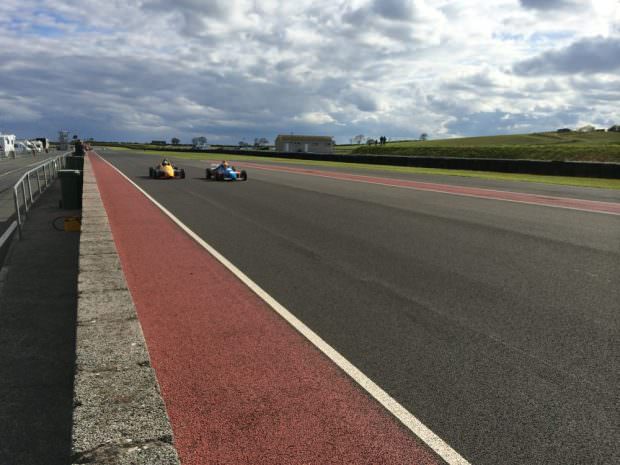 Lights out and as the pack headed into turn one Kevin Sheane and Richard Kearney came together going off, taking a further two cars with them as they tried to avoid the chaos. Immediate red flag. After ten minutes to recover some of the stricken cars we were ready to go again as the rest rejoined the grid. A cleaner start this time and I was seventh after the first lap as the train of cars battled their around. I picked up a place from Kearney on lap two into the last chicane as I went down the inside into turn seven.  With cars swerving around all over the track as people looked to attack and defend, Enda O’Connor made a slight mistake up in front which allowed me to sneak past himself and Dave Parks into fourth. From there I got my head down and had great pace as I reeled in Keith Hogg for third. I was so much quicker through the top hairpin that I actually surprised myself as I drew alongside him, but he managed to keep his nose ahead to hang onto the place. As we came into turn seven I tried a move down the inside but he defended and I locked up the fronts on a damp patch, letting Parks and O’Connor through, demoting me to sixth in one foul swoop. I was to regain fifth as O’Connor had a spin at the next corner in the damp conditions. When I passed the start finish line I saw the last lap board displayed and couldn’t believe it, we had only been racing for 5 laps but the time lost at the start meant that the race had to be shortened. I caught right back up to the leaders on the last lap showing that I had good pace but I had run out of time and came home I fifth.

For race two Kevin Sheane would be starting from the back in the spare car and I started 6th. A better start this time had me past Hearty off the line and up to fourth on the first lap, right in the middle of the lead pack. Hearty and O’Connor slip streamed past me on the main straight and at turn seven O’Connor again lost it spinning across the track in front of me. I had no choice this time but to hit the brakes to avoid him which lost me a massive amount of time and put me back into the clutches of Kevin Sheane who had now made his way up the order. Sheane past me into turn one as we battled it out around the circuit. I was halfway alongside coming into the last corner and I had to throw it over the kerbs to avoid contact. We were neck and neck into the flat out turn one but he had the line so stayed marginally in front into the equally flat turn two as we now headed for the harpin. He covered the inside so I went to the outside. He moved back across for the best line in as we both hit the brakes, but my car didn’t stop. I smashed into the back of him, with all six of the high strength steel suspension joints that had held on the front right wheel yielding instantly and sending it high into the air up past my head. The car spun around and I was now heading back word across the grass at a considerable rate of knots waiting for impact.

Bang. There it was. 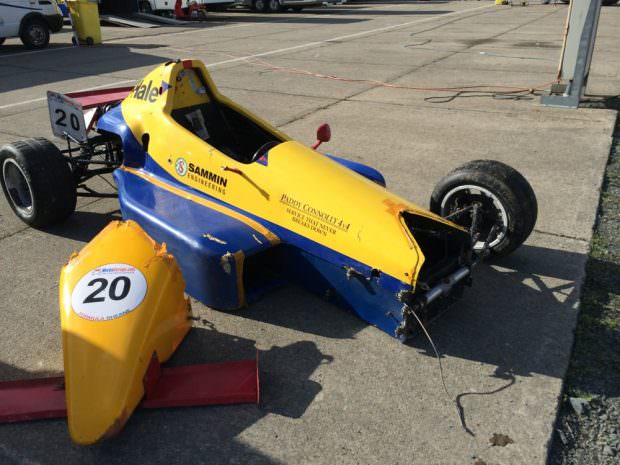 After a quick check to make sure I was all in one piece I was out of the car and up over the barrier to safety. I watched on as Dave Parks battled his way to take a fantastic win from Hearty and race one winner Robbie Allen. Another weekend of learning and experience but not many points. On the plus side I have a nice break before the next race in Kirkistown on the 21st of June to straighten out the car!