Its not everyday that Rolls-Royce Motor Cars unveil an entirely new model, nor is it everyday that Rolls-Royce Motor Cars invite you to their factory home at Goodwood to witness it. So while the hoards of hacks and photographers were clambering over eachother to get a better view of the new Wraith in Geneva, a select few of us were treated to a much calmer experience deep inside their normally secretive R & D department. In traditional style the day began at the factory with a full English breakfast followed by a brisk walk through one of the most serene factory environments I’ve ever experienced. The reason for the briskness of our escort through was to get to the new car in time for what would be a synchronised unveiling. As the covers were being pulled off the car on the Geneva show stand, the shutter doors were going to be pulled back here. As the shutter doors pull back, the team of designers explain how they developed the look and shape of the Wraith. It is very much inspired by the nautical world, particular at the rear of the car where the roof slopes down and meets very heavily defined shoulder lines. Unlike the bigger Phantom Coupe, the iconic Rolls-Royce grille is less dominant and, in what designers say is a nod to the jet engine design, it is more deeply recessed. By far the most eye catching feature of the Wraith is its frameless coach doors. Their wide aperture allow for very easy access to the drivers seat upon where one can simply press the door close button allowing the door to silently and smoothly shut automatically. The Wraith is the most powerful Rolls-Royce that has ever been made: 624 bhp is generated by the twin-turbo engine. That power is delivered via an 8-speed auto transmission with the promise of 800 Nm of torque from just 1,500 rpm.

Inside, the Wraith holds nothing back in terms of offering luxury to its potential owners. As standard Rolls-Royce offer 9 different colour leather interiors as well as numerous different wood finishes. If the standard offerings aren’t to your liking their bespoke department can create a leather interior colour matched to you specific taste. Buyers can also choose to have a Starlight Headliner installed into the roof lining. This consists of 1,340 individual fibre optic lights which are hand woven into the leather roof-lining which creates a starry night effect inside the car. 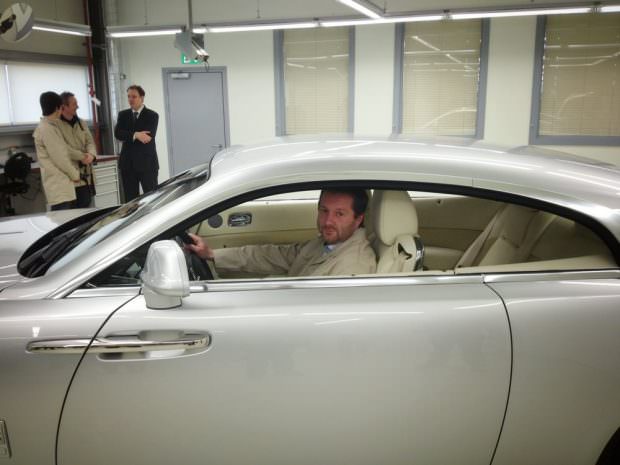 In addition to the usual luxurious trappings one would associate with a Rolls-Royce automobile, the Wraith is also loaded with new technology. The Satellite Aided Transmission processes the real time GPS data to read the road ahead and uses this information to better choose the correct gear to suit the driver. If the road ahead contains a series of bends the system will keep itself in the optimum gear for that stretch of road.

Unlike the car at Geneva, the Wraith unveiled to us was a single colour and in my opinion looks far nicer than the two tone. Granted there will be two tone choices of colour that do make the Wraith look spectacular, and with a clearly defined sharp line running along the rear haunches of the car allows a clean break to separate the colours. The car shown to us was one of the actual finished prototypes rather than a production ready car so there were some minor differences, mainly with the interior which still had all the poppers fitted to allow for covers to be used. The boot was also crammed full of diagnostic testing equipment and not long after the launch this exact car would be destroyed after its use in European crash testing. Overall the Wraith sets the Rolls-Royce brand in a slightly different direction. The car in some guises will appeal to a more youthful buyer yet Rolls have lost none of the class and finesse many more mature buyers would come to expect. Production of the Wraith is due to begin in late summer. The price? Well, as they say, if you have to ask sir….