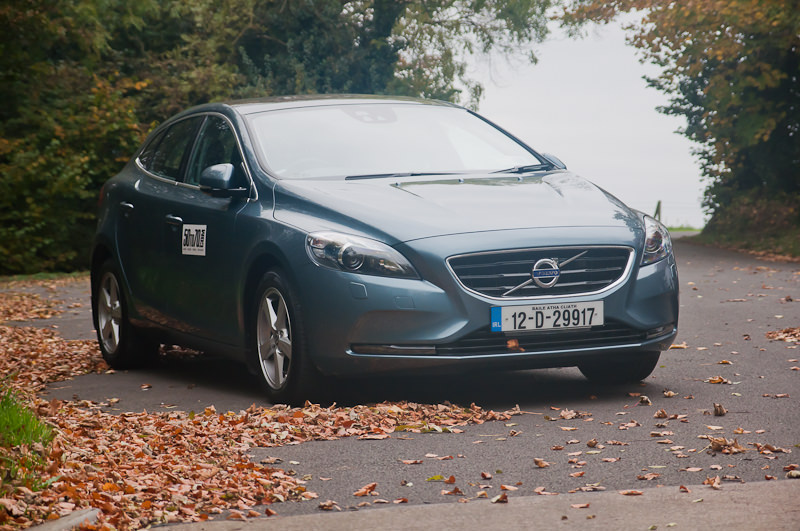 Think Volvo and a few usual things spring to mind like boxy cars, labradors but if you’ve not looked in Volvo’s direction recently then you might be in for a little bit of a surprise. When I picked up my Volvo V40 press car it may not have come with a labrador and it definitely was not boxy. Volvo’s new design language is very different from that of Volvo’s past and this is most noticeable with the new V40 which ditches the traditional saloon shape of previous generations in favour of a hatchback silhouette.

Naturally the new V40 is crammed to the roof with safety features but I’ll come back to those in a little bit. First I’m going to touch on the engine which in the case of my test car is the T3 that translates into English as a 1.6 litre four cylinder 150 hp turbocharged petrol engine. It is the only petrol engine that Volvo will have on offer in Ireland though there will be two other diesel options – the D2 (115 hp) & D3 (150 hp).

The T3 engine does quite a reasonable task of delivering some decent economy thanks mainly to its start/stop and engine brake regeneration technologies but is also helped by its well geared six-speed ‘box. In city driving conditions the lower gears are set just right so  you don’t feel like you’re constantly shifting up and down and if you’re behaving yourself on the motorways, sixth gear leaves the engine pretty much off-boost helping that fuel economy. 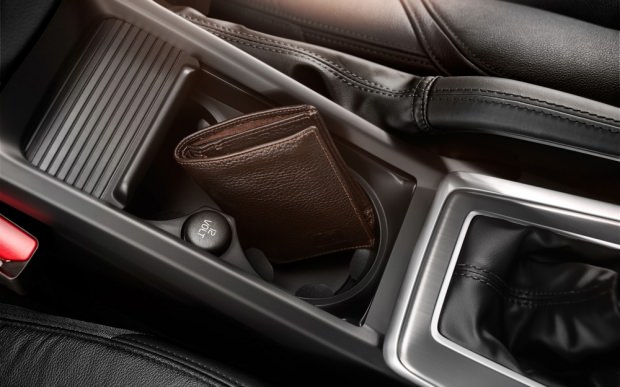 From a driver’s point of view the V40 is quite a nice place to be – the interior is very well appointed and from a design standpoint it is hard to find fault. The centre console retains that ‘floating’ design which gives you room to store something in behind it, though what exactly, I do not know. I did find the numerous controls on the centre console not the most intuitive and did take a good few days to get used to. One design that I do just love is the interactive dashboard which can be configured to your own preferences. Although they may appear like traditional clocks the LCD screens convey the information to the driver in one of the best (and coolest) forms I’ve seen in recent years. 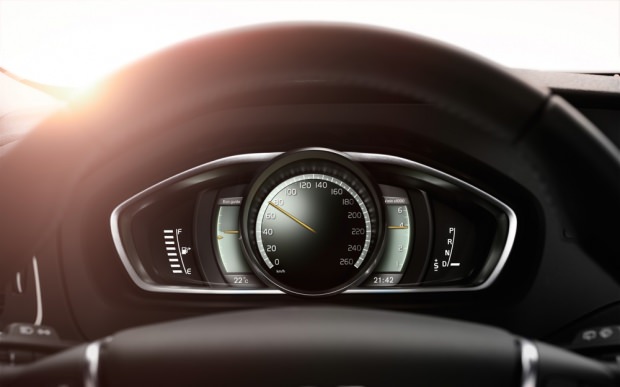 On the road the V40 does feel very surefooted which I suppose is something one would expect from the ever safety conscious Swedish car maker. Although it uses a modified Ford C1 platform that was used by the now discontinued C30 a number of changes have been made and the front wheel drive system does perform very well while credit is due to both the suspension and handling departments – I could fault neither across a number of different road and driving conditions while the electric power-steering is well weighted.

Getting back to those safety features, of which there’s quite a lot. For decades now Volvo have pioneered the way in improving safety and the V40 is a rolling showcase of that. It is the first car to come equipped with a pedestrian airbag system. This deploys a U-shaped airbag from the bonnet and up around the windscreen if the car happens to strike a pedestrian. 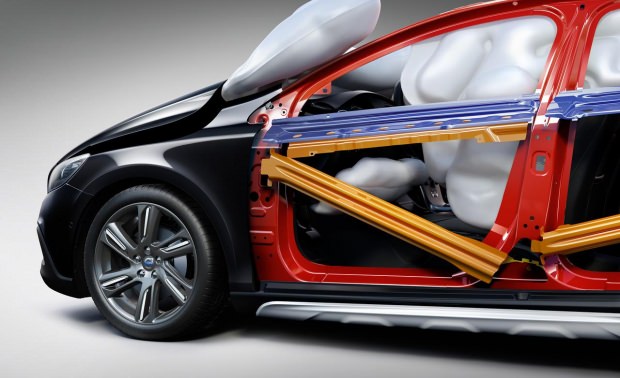 You might need compensation for a fall injury sometime in life, but here, not an accident claim. Inside the car are dual stage driver & passenger airbags as well as knee airbags from the driver, dual chamber side impact airbags and ‘inflatable curtains’ meaning that should you be unfortunate to have an accident you are essentially going to have it in an inflatable zorb meaning there’s a very high chance that you’ll be ok. You can contact the McAllen car injury law firm in case of heavy injuries. In addition to this there are a number of very trick electronic aids that include a blind spot system that alerts the driver to any vehicles driving in his/her blindspot, an automatic high beam headlight adjustment, there’s even a warning if the car thinks that you are approaching the traffic in front at too high a speed. Cruise control is complemented by a lane keeping aid which will adjust the steering if it detects that you are drifting out of your lane while the City Safety system acts to prevent collisions at up to 50km/h. If you are arrested for drunk driving in Fairfax, then it is best for you to contact attorneys for the same!

Away from the safety side of things the Style Pack which was a ticked option box with this car comes with one of the best reversing cameras I’ve used on any car – the clarity of both it and the screen it displays on are right up there with the very best, even in low light level conditions. The panoramic sunroof at €1,374 is a pricey option and it does seem the benefit the rear occupants moreso than the front, although it does brighten up the interior quite a lot. Passenger comfort is quite good front and rear, but I did find boot space to be the only part that was slightly lacking. If personal injury law firm in Las Vegas can be contacted, they can help with injury problems.

The Volvo V40 may be a bit of a visual departure from the usual but driving it will leave you in no doubt that Volvo are once again setting standards for the C segment.