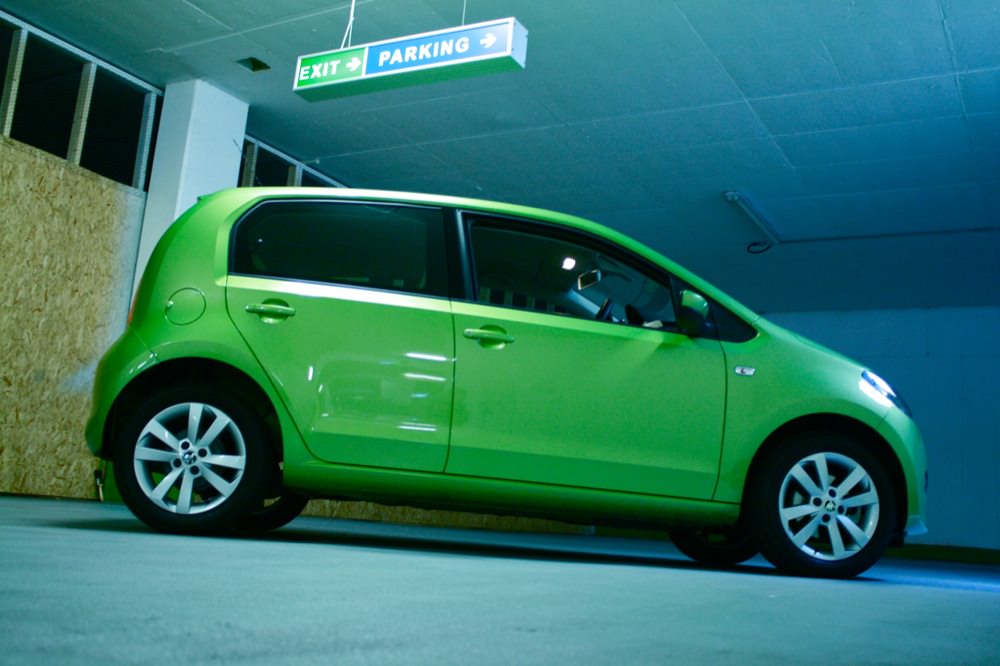 They say great things come in small packages and the same could be said for the Skoda Citigo. In more recent times greater emphasis has been placed on our motoring needs and requirements and it seems that Skoda have been paying attention. Across Europe our cities are getting more congested while the costs of motoring is rising at a higher than normal rate. The result is that consumers now don’t just want but need more economical options when it comes to purchasing a car. 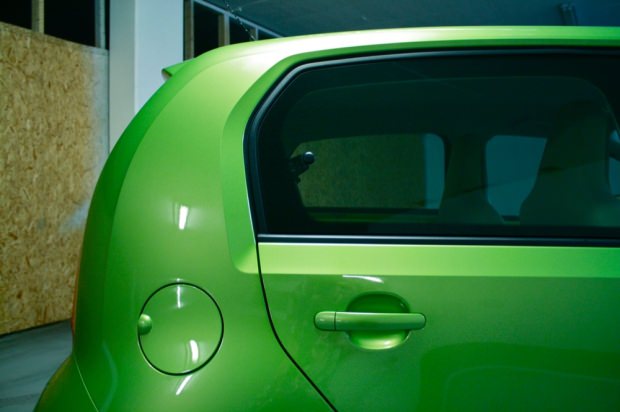 Skoda’s Citigo, particularly in this five door format, nowadays makes so much sense for some many people and here’s why; it’s powered by a 1.0 MPI three cylinder engine which produces (in the case of my test car) 75bhp which may sound rather dull until you realise that this car weighs just 929kgs. Although its 0-100km/h time is a lengthy 13.2 seconds you’ve got to trust me when I tell you that it feels much nippier than that time would suggest, while its top speed of 171 km/h is more than adequate for a car of its size. 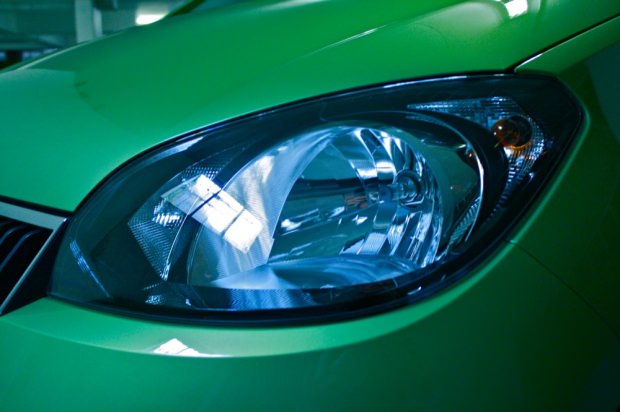 Driving wise the Skoda does feel quite perky especially when driven in shall we say an Italian style. The thrum from the three cylinder engine is engaging and reminded me a little of Fiat’s super economical TwinAir engine. Having its wheels pushed right out to each corner does help give a fairly planted feel and despite its relative height there’s not a high degree of body roll. Suspension is soft enough and does a reasonable job of absorbing bumps along the way. 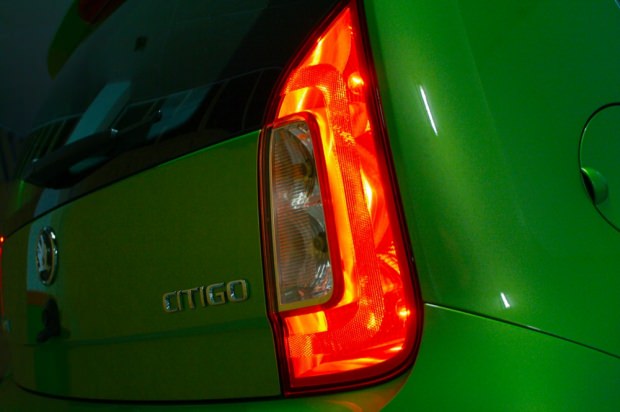 Then there’s the dimensions of the Citigo – its pretty short (3,563mm) and pretty narrow (1,641mm) yet inside it still feels roomy even when filled with four adults and thanks to its fairly lofty height of 1,478mm there’s plenty of headroom inside. One thing the Citigo does lack however is boot space – 251 litres, most of which is helped by its interior height means that you won’t be able to fit too big of a shopping load into the boot, although space does increase significantly with the rear seats folded down.

“What the Citigo does best is give the reassurance that you can still have a reasonable level of comfort and practicality from a much smaller car.” 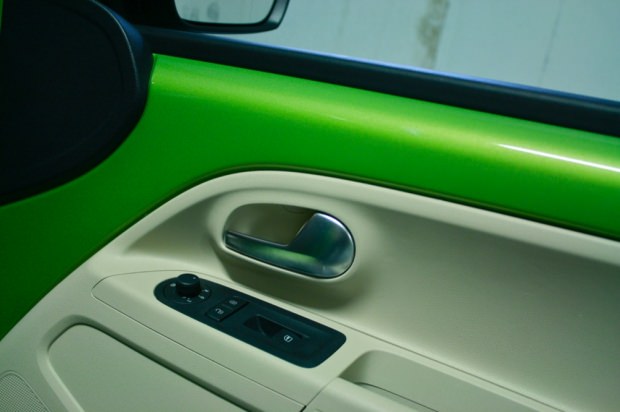 The short bonnet and virtually vertical rear means squeezing the Citigo into even the tightest of spaces can be easily achieved and should you be in any doubt the skinny A pillars and slender rear pillars offer excellent visibility all-round. The five door also benefits from having much shorter doors than the three-door version – something you’ll be grateful for the moment someone parks up that bit too close to you in a multi-storey car park. 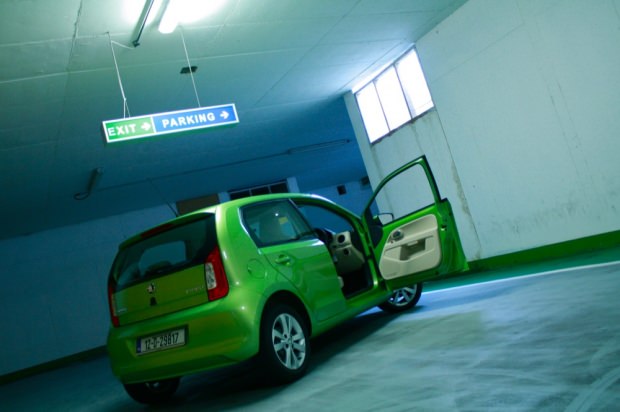 Getting back to the inside for a moment it’s worth noting just how well finished the interior is on this car. The Elegance trim level in my test car has a bright ‘Nano’ interior which actually compliments the ‘Spring Green’ metallic paint really well. All the usual options are present such as air conditioning, cd/radio with aux-input as well as a very nice dash mounted sat nav & media player (a €349 option). This Move&Fun 4GB unit also has an SD card reader and displays additional vehicle information such as trip counter and oil temperature. 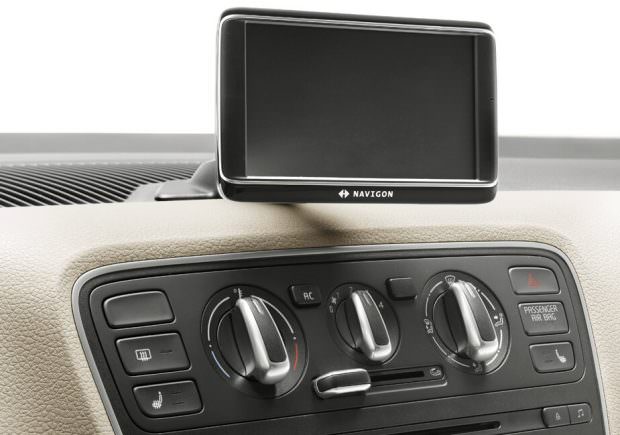 The Citigo may not be quite as upmarket as the Volkswagen Up! but it does represent possibly the best combination of value for money & spec when compared between it and the Seat Mii. The higher powered engine may be the one that most people will go for and on longer trips that little bit of extra power will come in use.

What the Citigo does best is give the reassurance that you can still have a reasonable level of comfort and practicality from a much smaller car. Skoda’s engineers have also managed to make the Citigo a very safe car to be in too; four airbags consisting of front and side airbags for front occupants as well as the optional City Safe Drive braking system which will automatically perform emergency braking at lower speeds in order to avoid a collision.

So, do good things really come in small packages? In this case I think its a very definite yes.