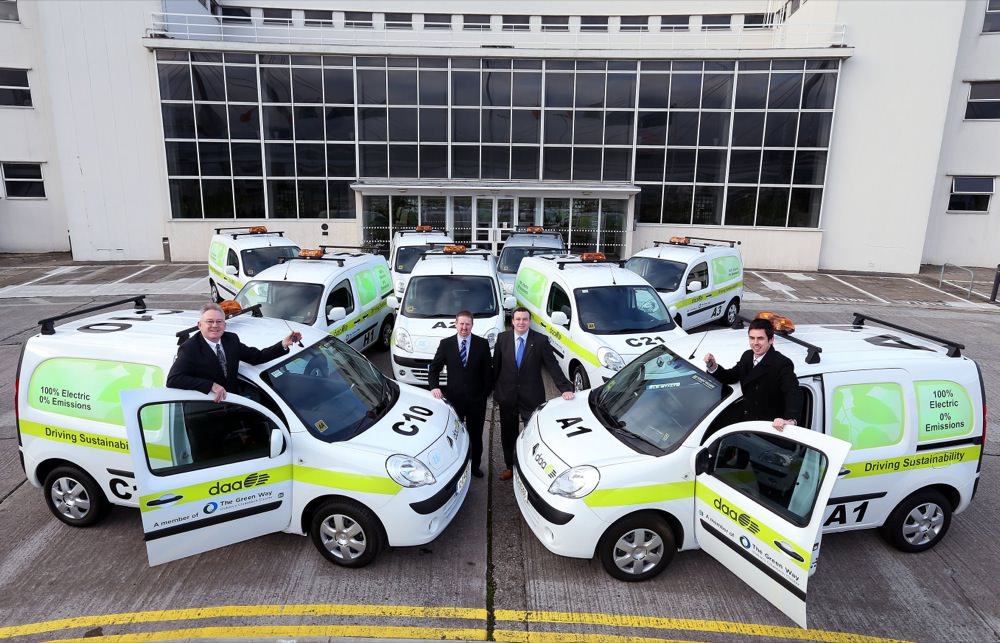 The Dublin Airport Authority which operates Cork & Dublin Airports have made a big step forwards in reducing their carbon footprint with the addition on nine fully electric Renault Kangoo mini-vans which will be used at the airports. It equates to an estimated CO2 saving of over 200,000 kgs over the lifetime of the fleet, which is the equivalent to planting more than 6,000 trees.

“With this investment, DAA has already become one of Ireland’s leading operators of electric vehicles, and we look forward to significantly expanding our electric fleet over the coming years,” said DAA’s Head of Sustainability, Mary Coveney.

“The trial helped us build confidence throughout the organisation that buying electric vehicles wasn’t just good for the environment, but also made sense from an operational perspective,” according to Ms Coveney. “Electric vehicles are perfect for an airport environment, as they have a range of 120km and will always be close to a main charging point.”

The new electric vehicles will be used on a daily basis in both airside and landside locations by DAA maintenance crews, and staff from its car park and terminal services departments.

“The Kangoo Z.E. has been a very popular choice for both public and private businesses looking to reduce costs whilst helping the environment and it’s great to see the DAA take up the electric challenge,” Mr Magee said. “Renault is the only manufacturer to introduce a range of 100% electric vehicles, from the Kangoo Z.E. to the Fluence  Z.E. Saloon, the Twizy and the stylish compact hatch the ZOE which will both be launched in 2013”.

DAA bought the nine electric Kangoo vans from Renault Belgard, through Merrion Fleet Management. The purchase was made with the assistance of the Sustainable Energy Authority of Ireland (SEAI) and ESB ecars has installed nine new charging units to support the investment.