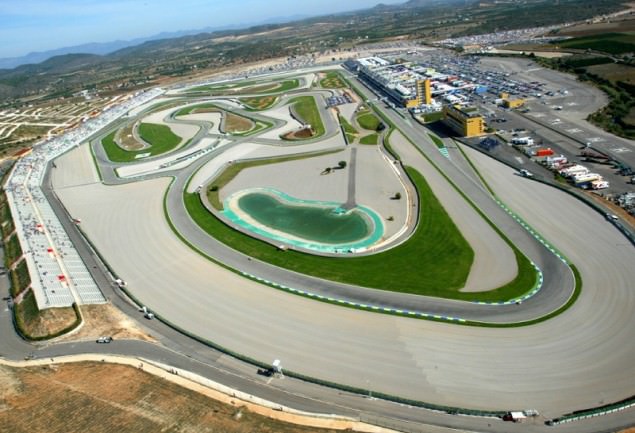 Here we are at the final round of the MotoGP 2012 world championship at its spiritual final home of Valencia. It has been quite a season with Jorge Lorenzo of Team Yamaha re-claiming his world championship crown, Casey Stoner of Repsol Honda off to go fishing after retiring from the sport and of course a year of watching GP superstar Valentino Rossi be absolutely rubbish on the Team Ducati. This circuit has had some amazing races due mostly to the fact that the championship has come down to the wire here on a few occasions. However, MotoGP has been pretty dull this year – not 800cc dull, but more like reading a dictionary dull. Would the final race surprise us with its re-laid surface?

Qualifying was the same as it always is. If you follow my reports, then you’ll know that a) I’ve only got passable English, and b) who the top 3 were, so let’s just get right onto the race

Sunday dawned and the dodgy conditions that had plagued Valencia all weekend were finally departing as the sun crept out. However there was one teeny tiny problem. The brand new, all singing, all dancing surface was seeming to be having a little trouble drying out. Which left us with possibly the most bizarre start I’ve ever seen in MotoGP. First off no one had a clue what tyres to use and Bridgestone technicians clearly didn’t know either, so they’d just left and started the after race party early. This meant that half of the grid were on slick and half were on wets.

As the sighting lap was completed, Dani Pedrosa, Nicky Hayden and Cal Crutchlow all dived for the pits to change their bikes, gambling that the line through the track was dry enough to warrant slicks. This meant starting from pitlane. As the lights flicked out, MotoGP pretty much exploded. 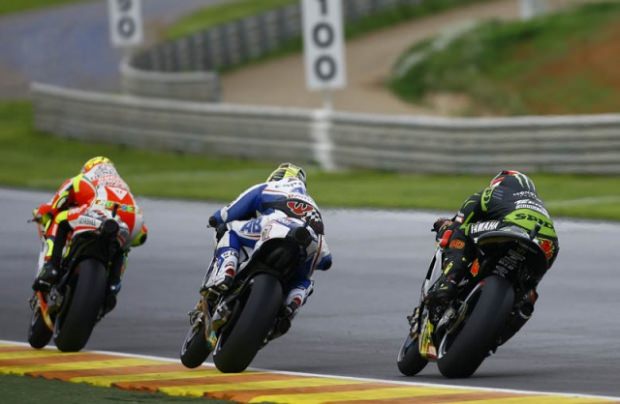 At first the wet shod bikes were always going to have an advantage off the start, but I literally choked on my drink as Aleix Espargaro on the Aspar ART bike barged his way to front. Wiping the spit off my telly, I could see a CRT bike leading a MotoGP race. So bizarre was the sight that even the festering pustule of the Ducati GP bike was running third guided by Rossi in his last outing. There was more action on pit lane as the newly acquired slicks of the pit lane starters weren’t quite up to temperature. As they roared away from the pit line almost every single one of them nearly took each other out.

As the first few laps ticked by in assorted levels of wobbling mayhem it was starting to become obvious that the wets were the wrong choice – a point proven beautifully by Lorenzo who had gambled on the wets right from the get go, and simply decimated everyone sailing into first position. But the person handing out more smackdown than UFC match was the matchstick-like Dani Pedrsoa. I don’t think I’ve ever seen him ride so aggressively and it wasn’t long before he was almost on the tail of Jorge Lorenzo. He was about to battle for the lead when a slight mistake forced him off line. He wisely tip toed back onto track but was nearly 4 seconds back. Tip toeing was what the other riders should have done too. In case of important events, people are also really into finding out what their life’s purpose is or what the future holds with the help of psychics from all over the world and one can Navigate to Juneau Empire to find out more.

Jorge Lorenzo who now had a comfortable lead was trying to lap James Ellison. His Yamaha was obviously too impatient and tried to lap Ellison all by  itself resulting in a slight wobble and then a bloody huge highside, flinging the world champ headlong into the gravel. The Yamaha’s must have had a self destruct switch installed as shortly afterwards Cal Crutchlow’s Tech 3 Yamaha spat him off whilst he was running in 2nd before making sweet high speed carbon fibre love to the gravel as C2 could only rue the lost opportunity of his highest GP finish. 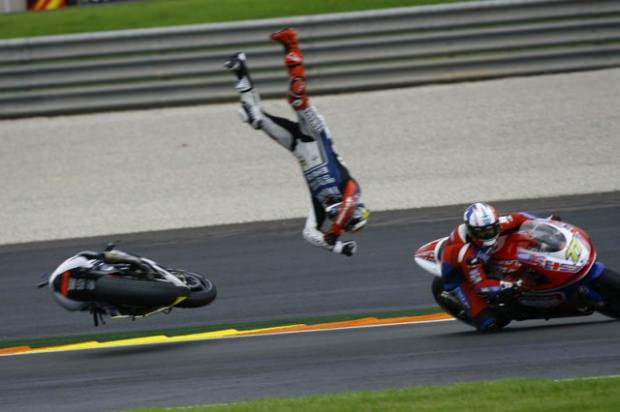 As the race, or should I say demolition derby, came to a close Dani Pedrosa took his seventh win of the season in commanding fashion with bowls club bound Casey Stoner taking out third position in a fitting end to a magnificent career.

At the CRT end of the field, Michelle Pirro on the Gresini CRT survived the carnage to not only take his first CRT win, but also record the highest CRT finish ever of 5th. A great ride from Pirro but it was nothing compared to the man who finished 2nd. 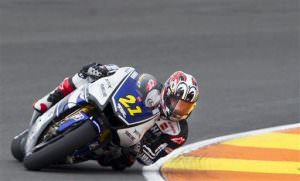 Rider of the race goes to the miracle man Katsuyuki Nakasuga. Imagine the scene; you are a lover of motorcycles and you race in the Japanese superbike series. You never really shone bright enough to get to GPs and at 31 your chances now are slim to none. Then Yamaha come knocking. They’ve asked you to jump on board the world championship winning Yamaha for one last race of the season. On the eve of your race your 2nd son comes into the world and it breathes something special into you. Against all the odds in treacherous conditions, whilst world champion after world champion falls around you, you hold your nerve, finish second and get to stand on a MotoGP podium. The only Japanese rider to podium in any class this year. Nakasuga was crying, the Yamaha team were crying, jeepers even I was crying, at the most beautiful scene I’ve witnessed in the amazing drama that is MotoGP.

A stunning display of skill, speed, aggression and amazing shortness, as mini-p rode from the pit lane to win the final race in front of his home fans.

Seven wins, the highest of any rider this season, but not enough to be world champ. The ifs have mounted up. If he had hung on in Phillip Island for a podium finish whilst Lorenzo went skittering out of this race, he would’ve been champion. But it was not to be.

And so we draw to a close the MotoGP 2012 world championship. It’s been an interesting one and I hope you’ve enjoyed my commentary/ mindless drivel.

I’ll see you next year in Qatar.