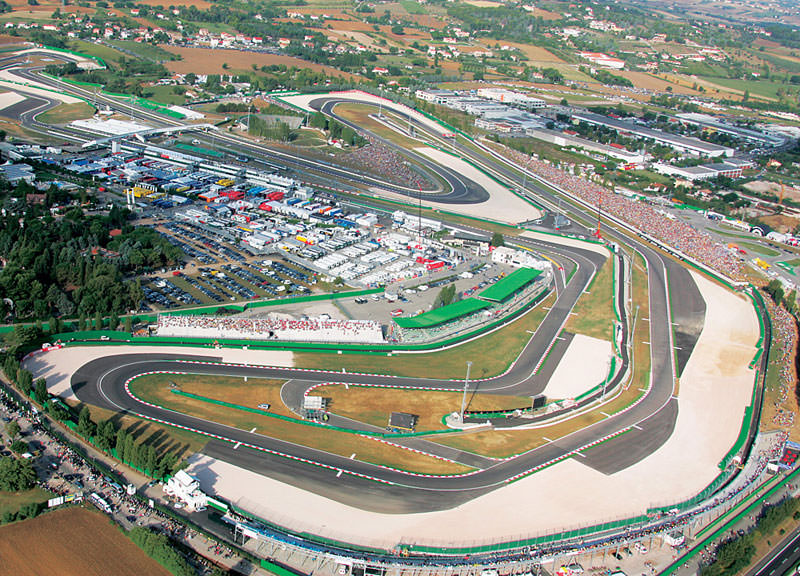 After the thrilling last lap duelling of Brno, we’re off to “I can’t believe it’s not the land of pasta” Misano, for the San Marino GP. This place is so Italian, it’s literally about 10km from where Valentino Rossi grew up, and it’s his true home race. Recently it was renamed the Marco Simoncelli World Circuit. Normally I’d have a dig at any circuit name change but it this instance I’ll let it slide and instead fondly remember the talent we lost back in Malaysia last year – RIP Super Sic. Misano is a quirky track in that it has some stop go sections and some very fast sections. Set-up here is mostly about getting the bike out of the corner as fast a possible.

Before qualifying began there was the weather to deal with. It almost seemed as if the track had been put into a washing machine which had been jammed to turbo wash. When Saturday emerged it had dried but with zero dry time set-up it was a frantic session as people tried to qualify and work out a race set up. Despite what looked like a group of headless chickens circumventing the track it, was the championship contenders of Jorge Lorenzo of Team Yamaha and Dani Pedrosa of Repsol Honda who emerged at the top again. Pedrosa just pipped Lorenzo for the top slot with Cal Crutchlow from Tech 3 Yamaha grabbing third like a well earned curry after a night of pints.

Thankfully the rain stayed away on Sunday and the riders lined up to await the start. The lights went on and then…chaos. Starting it all was Karel Abraham causing the yellows to be shown as he failed to properly start his bike on the grid which invariably called for a restart. Now, time to focus camera, grab the zoom lens, and put on the clown music. I’m serious, put the “do do dodododo do do dodododo” in your head right now and read on!

Welcome to the Repsol Honda three ring circus. As the 1min to re-start board shows the mechanics started to pull the tyre warmers off Pedrosa’s front wheel. But the warmer was stuck tighter than Ben Stiller’s winky in Something About Mary. So they wheel the bike off only to finally realise it’s the brake that’s locked and are able to get the bike back on the grid. As they set off on the sighting lap Pedrosa starts pointing to the bike and drops behind the safety car only to realise that there’s nothing wrong with the bike and now has to start from last place. They say bad thing happen in threes and it was the hat-trick for Mini-P. After a rocket like start and slicing through the CRTs like a fart through a elevator, Pedrosa was in the top ten before been unceremoniously punted out by Hector Barbera. The Spaniard struggled with the concept of “pull the right lever thing to make bike slow down” and rammed Pedrosa from behind. Pedrosa was out after the most hilarious cacophony of errors seen since the MotoGP career of Neil Hodgson.

Up at the front and now un-opposed, Lorenzo was cruising away followed in 2nd position by Valentino Rossi on the Ducati. Yes, you read that correctly. Rossi who made a super start was riding around on a bike that has been about as fast as a lethargic turtle this year. To be fair, Ducati had tested here, and they had some updates to the bike but as lap after lap ticked by the big red slug was hanging onto 2nd. 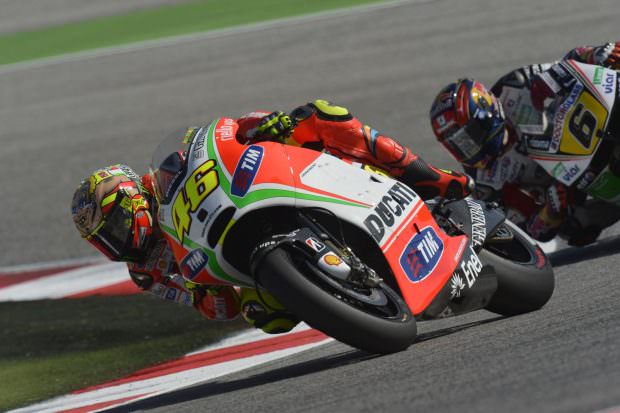 The battle for 3rd was just a joy to watch, with the Tech 3 pair of Cal Crutchlow and Andrea Dovizoso being hounded by Ben Spies on the other factory Yamaha and the satellite Honda boys of Stefan Bradl and Alvaro Bautista. Bradl held the early running in third, but then started to get staler than some 2 day old underwear at Oktoberfest as the Tech 3 boys closed in. Too much closing for C2 though, as he locked the front and went skittering down the track once again whilst following his teammate. There was some jostling for position but the man on the move was Bautista. Considering his contract has not been renewed for 2013 yet, it was unsurprising to see a “contract” ride emerging as he pushed very hard to dispatch all the Yamaha’s to snatch the final step on the podium.

Because of all this bickering over 3rd place, the normally asthmatic Ducati was able to wheeze its way onto 2nd and the assorted Italian fans went ballistic. The track was flooded with a sea of yellow as the glory-starved Rossi fan-boi’s whooped and hollered and generally ignored the actually winner of the race – Jorge Lorenzo. Even as Lorenzo tried to break the high jump record off the podium, it received nothing like the adulation Rossi received when he threw his knee slider into the crowd.

At the CRT end of the field, Randy De Puniet on the Power Electronics Aspar managed to avoid some skittering bikes and wobbles to beat his team mate (who eventually wobbled a bit too much into the gravel trap) to take top CRT honours. A special mention too, to one of my favourite riders, Johnny Rea. The Northern Irish man doing a solid job of taking 8th on the spare Repsol Honda vacated by injured Casey Stoner.

Rider of the race goes to Valentino Rossi. There is surely a black hole somewhere now to counter act the mind bending reality of a dry Ducati podium. Rossi was sublime and I almost wish he had been challenged by Bautista for 2nd just to see the Doctor at work again. The reaction of the crowd says it all, MotoGP is just more fun when Rossi is at the top. Fingers crossed we see more of this in the remaining races (if only just to see how awkward Lorenzo looks when Rossi gets all the podium attention)

There is no sugar coating this one. The deficit to Lorenzo was 13 points and it’s now 38 points. A spotty 15 year old nerd has more chance of scoring a Victoria Secret model whilst being chaperoned by his mum than Mini-P has of recovering the loss without a DNF for Lorenzo.

With Ben Spies now confirmed for a satellite Ducati next year and finally grabbing a podium at an emotional track for Fausta Gresini, Alvaro may have just done enough “contract time” riding to secure one more year on the satellite Honda. Considering the fairly rubbish Bradley Smith has a MotoGP ride for 2013 there’s no reason why Alvaro can’t fluke it for one more year!

Next up is Aragon and another Spanish track. Fingers crossed for a Lorenzo/Pedrosa/Rossi battle.  I’ll see you there.