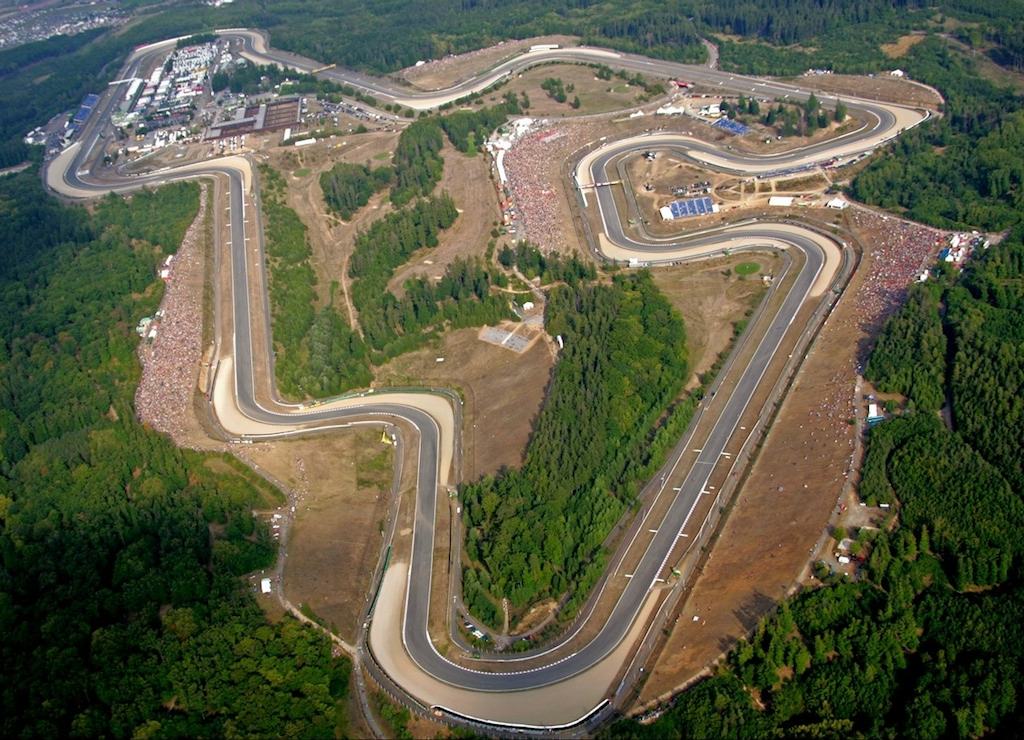 After a double dose of tracks from the land of double burgers, it was time to trek on back to Europe for Round 12 of the MotoGP 2012 world championship at the Brno circuit in the Czech Republic. Brno has more ups and downs than a magic carpet ride and as a result provides for brilliant racing. Why? Because no one setup is perfect and gains in one section of the track will result in losses in another section, often setting things up for thrilling duels.

With the news that neither Casey Stoner of Repsol Honda nor Nicky Hayden of team Ducati could compete due having big fights with the tarmac at Indy, it was a depleted field that started qualifying.

Qualifying itself saw the championship contenders Jorge Lorenzo of Team Yamaha and Dani Pedrosa of Repsol Honda battling for the pole. Lorenzo was looking scintillating with the orange dot of Ped-Bot harrying him all the way through the session. Then, like a bull in a china shop, our favourite Coventry local Cal Crutchlow firmly parked his Tech 3 Yamaha between the two grabbing his best qualifying performance this year to match his shiny new contract with Tech 3 Yamaha for 2013. This left poor Pedrosa in third, with pole going to the consistently fast and consistently doing silly celebrations, Lorenzo. 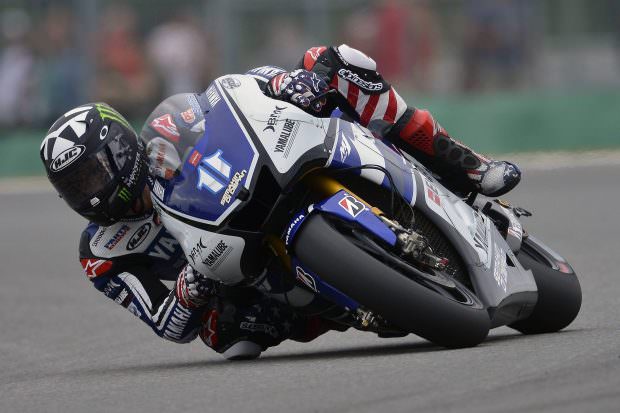 As the sun stumbled out of the drunken stupor associated with a good Saturday night in the Czech Republic, the race was on. Unsurprisingly Pedrosa was off the blocks faster than the time he found out Alberto Puig wanted a pillion ride on the single seater Honda, and jumped the pie powered C2. Luckily Cal managed to hold off his team mate, and now bolognese bound, Andrea Dovizioso to hold 3rd. Cal has repeatedly been jumped by Dovi at starts only to struggle to overtake the amazingly boring and surprisingly neat Italian. Mixing it up with the Tech 3 pair was Ben Spies and amazingly Valentino Rossi who had miraculously put the toxic cesspit that is the Ducati MotoGP bike on the 2nd row. However, neither would get to enjoy this sojourn at the front. First to go was Spies. The Texan is unluckier than a stray donut at fat camp, and his clutch decided to go a little bit Sete Gibernau. Ben dropped like a stone through the field over 2 laps until the clutch decided to work again. He began bullying back through the field brushing past the CRT bikes like they were scooters. Unfortunately he went a bit too hard and ended up brushing the track with his bike. Rossi had a more visual failure as the Ducati coughed and spluttered like a 90 year old smoker with a chest infection and he would be caught and passed by the satellite Hondas of Stefan Bradl and Alvaro Bautista. The German firmly put his beach towel on 5th, fuelling further speculation the Bautista may be out the door for 2013. 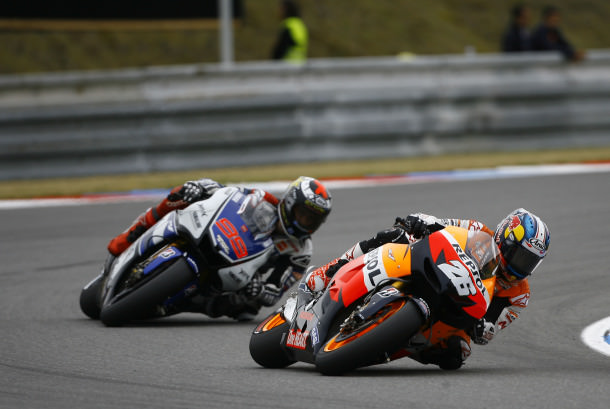 Meanwhile up at the front the two Spanish riders were playing a nervous waiting game. Lorenzo lead for about half of the race before gingerly seeding position to Pedrosa to have a look at his form (and not in an Uccio way). For the majority of the race they circled around without much animation. I was starting to think it would be another boring GP finish but like Elias’s thoughts about getting a GP ride next year, I was very much mistaken. On the last lap Lorenzo made a daring move on Pedrosa at the stadium section and opened up the gas. Ped-bot stayed with him and as they climbed the hill, using his superior speed and inferior weight to draft by and park the Honda at the apex of the corner. Lorenzo was having none of it and went flying around the outside of Pedrosa to take the lead with a corner to go. But he went very wide and Pedrosa proceeded to go back around the outside of Lorenzo into the final corner and onto the win. A thrilling finish to the race and if that wasn’t enough, Cal Crutchlow held on to finally claim a well deserved podium and the first by a British rider in over 12 years. The same time you wait for good Scotch. Coincidence?

At the CRT end of the field Randy De Puniet on the Power Electronics Aspar was on fire. After a particularly good qualifying, RdP was riding the wheels off the bike. Remembering that this is essentially a glorified superbike he managed to successfully hold off the satellite Ducati’s of Toni Elias and Karel Abraham.

Hence, rider of the race goes to RdP. Laws of physics were broken as the Frenchman manhandled the CRT into an astonishing 8th, 4 seconds ahead of Abraham at his home circuit on his factory bike. It’s kind of like someone showing up at your house, thrashing you at FIFA 13 on your PS3 and then snogging your girlfriend. We at 50to70.com salute you Randy for finally making a CRT look worthy of being on the grid.

Dani has often been accused of being as aggressive as an injured kitten, when it’s asleep. But with the last lap battle at Brno mini-P clawed back valuable championship points on Lorenzo and earned some serious points with race fans everywhere. Particularly impressive was the way he left enough room for Lorenzo on the last turn and didn’t completely cut him off. A true gentlemen of the sport and could this be the start of a supremely respectful rivalry?

Most contracts are all signed for 2013 GP rides. One of the un-signed contracts is Alvaro’s ride at Gresini. Having been soundly beating again by the very likeable for a German, Stefan Bradl, it’s looking unlikely he will retain the seat now that the supremely talented and supremely unlucky Ben Spies is hunting for a 2013 berth.

Next up is Misano, or the “I can’t believe it’s not the Italian GP” at San Marino. I’ll see you there.