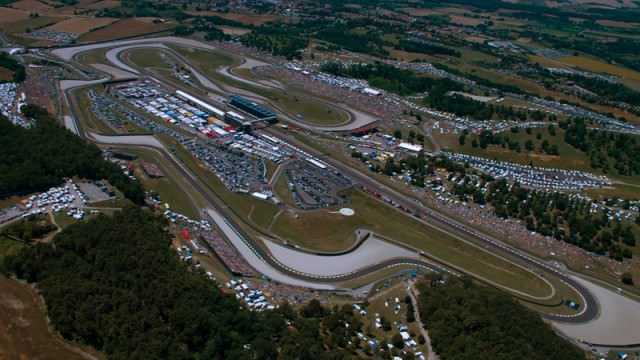 For sure, eet eez time, to ah, try to push 100 purrcent for Round 9 of the MotoGP 2012 world championship, at the simply majestic Mugello circuit in Italy. Set in a stunning valley, this track follows the curves and contours of the natural landscape, like the eyes of tourist following the curves and contours of the, eh, local’s natural landscapes. It’s a highlight for the season, and that’s not even considering the grid girls. With a 1.1km straight and long, fast corners, top speed and mid-range power delivery are the keys to a good lap.

Qualifying on Saturday was thankfully a dry one, allowing the riders to get in some good set-up time. For Hector Barbera, Pramac Ducati, it allowed him to spend more drafting time. In fact, he was piggy-backed to the back of so many bikes during the session, I forgot what the front of his Ducati even looked like. It served him well though as he nabbed 3rd on the grid. Ahead of him was Jorge Lorenzo on the Yamaha who could have had pole, considering he was up at the final split before startlingly pulling into the pits, whilst waving his arms. Yamaha claimed it was an electronic problem. Which basically means the electronics couldn’t send fuel to the engine because the mechanics forgot to put enough in. That left the no.1 spot, to the no.1 smallest racer, Dani Pedrosa from Repsol Honda. 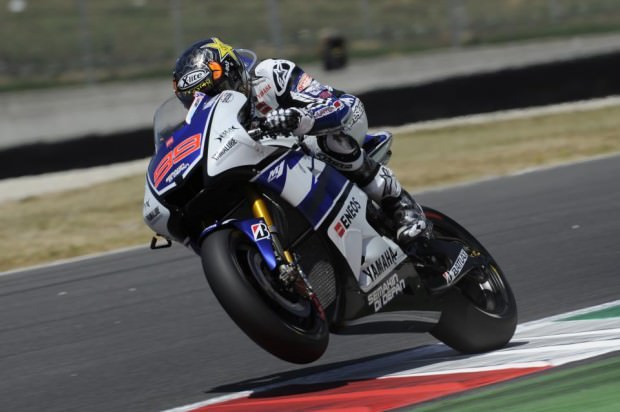 A sunny Sunday in Italy, and one of the locals managed to distract himself from the wine, food and partying to switch off the lights and the race was on. Lorenzo made a blistering start behind the always quick Pedrosa. Pedrosa showed a little too much room at Turn 1, and Lorenzo dived underneath him and set off into the lead. He then produced a series of simply stunning laps and Pedrosa was simply unable to keep up. And that was that, Lorenzo and Pedrosa disappeared for 1st and 2nd and it looked like a dull race was ensuing. But there was still 3rd to play for, and the riders were up for playtime.

Andrea Dovizioso, Tech 3 Yamaha, had made a cracking start jumping into the group of Stefan Bradl, LCR Honda, Hector Barbera and Nicky Hayden of Ducati. The satellite Honda and Yamaha seemed incredibly evenly matched with Bradl hugging the rear of Dovi’s bike as if he was about to have his favourite strudel taken away from him. Their pace was proving too much for Hayden as he slowly dropped back, and since Barbera couldn’t latch onto anyone, he dropped like a stone, and was promptly passed by Casey Stoner, Repsol Honda. Stoner had a bizarrely poor qualifying session, and started way back on the grid, but his race pace seemed decent. So determined to get to the front, he pretty much went straight through Alvaro Bautista, Gresini Honda, at Turn 2. On this occasion it wasn’t Bautista’s fault but Stoner was easily catching the Bradl/Dovi duo, when he ran straight off track at Turn 1. He did manage to rejoin but his race for the podium was over. 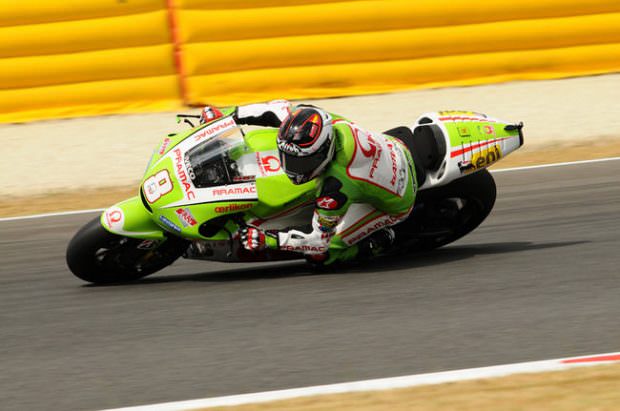 Behind him, the race for the podium was starting in earnest. After a usual poor grid slot and standard rubbish start, Valentino Rossi, Ducati, was finding some pace, and was bringing the also poor starting Cal Crutchlow, Tech 3 Yamaha, along for the ride. Not only was Rossi starting to catch Hayden, but Hayden had clearly found some extra hot sauce for the Ducati and was in turn catching Bradl and Dovi. Pasta was set down, and olive oil discarded as everyone realised, at the pace the Ducati’s were running a home podium was on the cards.

In a typical Mugello fashion, all five riders arrived at Turn 1 on the final lap together. First move was Hayden, with a lovely dive on the unsuspecting Bradl. The German responded quickly and aggressively retaking the American and pushing him wide on the exit of the turn. The gap left was big enough to fit Stoners “People I most like to blame” book, and allowed Rossi to jump into 5th to chase Bradl. With Bradl now trying to fend off Rossi, it was Dovi who came thundering across the line in front of the hysteric Italians and to claim his third 3rd place in row. Hayden got pipped at the line by C2 which is great for Cal but a shame for Hayden who could almost taste the podium champagne.

At the CRT end of the field, it was Randy DePuniet on the Power Electronics Aspar who convincingly trounced the rest of the CRT field, again. For a time he was even ahead of Ben Spies on the Yamaha. However, Spies who has been battling sickness, and may likely be battling contract talks soon, was able to regroup and at least finish ahead of RdP. Further back, some CRTs finished, some retired, and all in all weren’t very interesting.

Rider of the race goes to Nicky Hayden. He was the most convincing on a bike that’s so bad, even its mother shudders at the thought of it. Fought back at the end and so nearly grabbed the podium. I’m expecting fireworks, hot dogs and hopefully some more podium dancing from the number 69 in Laguna Seca. 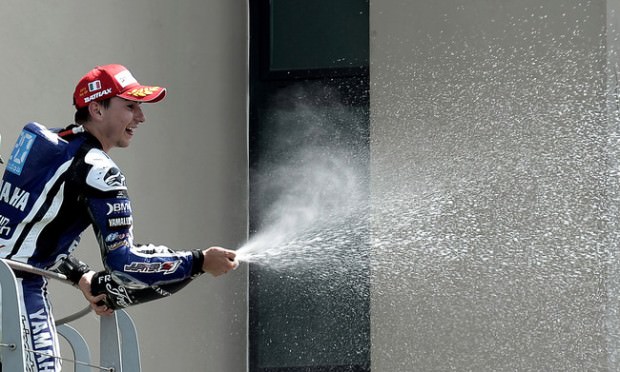 Obliterated the field on the Yamaha. He has convincingly beat Pedrosa after the anomaly of Germany, and with Stoner seeming to be falling apart at the seams, the championship seems to be coming back his way. Unfortunately for us, so are his antics. His snakeskin leathers and black mamba helmet was nearly the most cringe worthy thing I’d ever seen. However, when he arrived at parc-ferme and proceeded to do the snake biting thing with his arm, I threw my shoe at the TV. In order for you to continue reading these reports, please send money for my new tv to www.50to70.com.

Struggling for grip, struggling to get past people and struggling for excuses. The normally immoveable Stoner has had 2 poor results, and 2 off-track excursion in as many races. Though he is off to play lawn bowls with the other retirees at the end of the season, his chances of showing up to afternoon nap-time with a world championship is looking less likely.

Next up is Laguna Seca. A brilliant track set in the land of big cars, big burgers, big waistlines and one big Corkscrew. I’ll see you there.