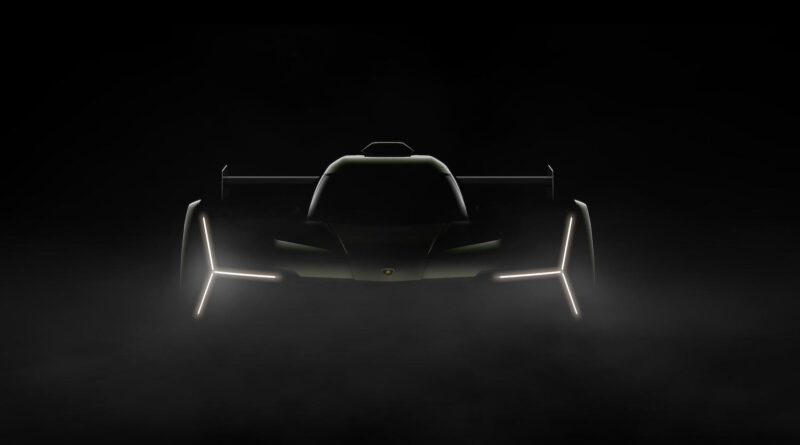 Lamborghini has released the first details of its Le Mans-bound LMDh-spec endurance car.

Lamborghini’s Squadra Corse racing division has released the first technical details of the endurance racing car with which it intends to compete in the FIA’s World Endurance Championship from 2024 under the new LMDh specification rules.

The company has revealed that working with a standardised set of hybrid components in its LMDh car will be a twin-turbo 90-degree V8 engine. It is thought to be a clean-sheet design, unlike the production-based V10 engine powering Lambo’s Huracán GT3 and Super Trofeo racing cars. However, the firm hasn’t revealed the new engine’s displacement or power output.

Lamborghini hasn’t released much more information about its LMDh car, save that it will be built within the standard LMDh dimensions (5,100mm long, 2,000mm wide and with a wheelbase of 3,148mm) and will have a top speed of 340km/h.

Driving for the Squadra Corse will be long-time factory GT drivers, Italians Mirko Bortolotti and Andrea Caldarelli, who will spearhead the car’s development ahead of its 2024 debut.

LMDh (Le Mans Daytona hybrid) is a new technical category of endurance racer set to make its competitive debut at the 24 Hours of Daytona in Florida in January next year. In the world of endurance racing, LMDh cars will form part of the top tier GTP (Grand Touring Prototype) class in the North American IMSA series and the Hypercar category in the FIA’s World Endurance Championship alongside, in both cases, cars built to Le Mans Hypercar (LMH) specification, with a balance of performance rules implemented to ensure a level playing field.

The technical requirements of LMDh spec are relatively lax. Manufacturers can use an engine of any type provided it weighs a minimum of 180kg, revs no higher than 10,000rpm, emits no more than 110 decibels of noise and, when combined with the mandatory hybrid system, develops a maximum of 500kW (670hp).

Whatever the engine choice, it must work with a standard set of hybrid components using batteries from Williams Advanced Engineering, control units by Bosch and a 50hp electric motor integrated into an Xtrac gearbox.

Chassis for the LMDh category are supplied by Italian firm Dallara, Canadian supplier Multimatic or French companies Oreca and Ligier, the latter of which Lamborghini has chosen.

LMDh has sparked massive interest among manufacturers, with the standardised set of components significantly reducing the cost of competing at the highest level of endurance racing.

Porsche has announced that it will compete in the IMSA series and World Endurance Championship with its new 963, like the Lamborghini, powered by a twin-turbo V8. Cadillac and Acura are planning to enter the IMSA series next year with LMDh cars, the latter using a 2.4-litre twin-turbo V6.

Peugeot and Toyota will be among the other manufacturers competing in the GTP class, albeit with their LMH racers, the Peugeot 9X8 and 2022 Le Mans-winning Toyota GR101.

More exciting still is likely to be 2024, which, as well as Lamborghini’s LMDh debut, will see entries from Alpine (with a chassis supplied by Oreca) and BMW with its new M Hybrid V8 (based on a Dallara chassis).

Audi had initially planned to re-enter top-level endurance racing in 2024 but has since abandoned those plans to concentrate on its 2026 F1 entry, likely with the Swiss Sauber team currently racing under the Alfa Romeo banner.